Noncommunicable Diseases and Youth: A Critical Window of Opportunity for Latin America/Caribbean 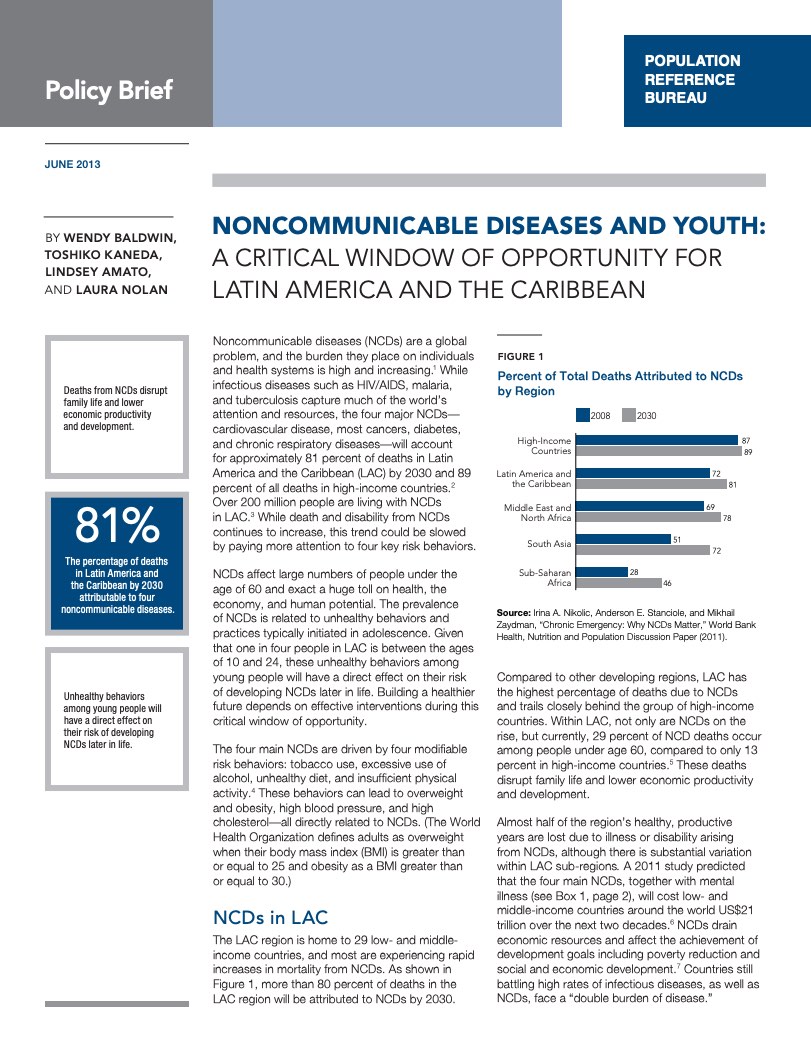 Noncommunicable diseases (NCDs) are a global problem, and the burden they place on individuals and health systems is high and increasing.1 While infectious diseases such as HIV/AIDS, malaria, and tuberculosis capture much of the world’s attention and resources, the four major NCDs—cardiovascular disease, most cancers, diabetes, and chronic respiratory diseases—will account for approximately 81 percent of deaths in Latin America and the Caribbean (LAC) by 2030 and 89 percent of all deaths in high-income countries.2 Over 200 million people are living with NCDs in LAC.3 While death and disability from NCDs continues to increase, this trend could be slowed by paying more attention to four key risk behaviors.

NCDs affect large numbers of people under the age of 60 and exact a huge toll on health, the economy, and human potential. The prevalence of NCDs is related to unhealthy behaviors and practices typically initiated in adolescence. Given that one in four people in LAC is between the ages of 10 and 24, these unhealthy behaviors among young people will have a direct effect on their risk of developing NCDs later in life. Building a healthier future depends on effective interventions during this critical window of opportunity.

The four main NCDs are driven by four modifiable risk behaviors: tobacco use, excessive use of alcohol, unhealthy diet, and insufficient physical activity.4 These behaviors can lead to overweight and obesity, high blood pressure, and high cholesterol—all directly related to NCDs. (The World Health Organization defines adults as overweight when their body mass index (BMI) is greater than or equal to 25 and obesity as a BMI greater than or equal to 30.)

The LAC region is home to 29 low- and middle-income countries, and most are experiencing rapid increases in mortality from NCDs. More than 80 percent of deaths in the LAC region will be attributed to NCDs by 2030. Compared to other developing regions, LAC has the highest percentage of deaths due to NCDs and trails closely behind the group of high-income countries. Within LAC, not only are NCDs on the rise, but currently, 29 percent of NCD deaths occur among people under age 60, compared to only 13 percent in high-income countries.5 These deaths disrupt family life and lower economic productivity and development.

Almost half of the region’s healthy, productive years are lost due to illness or disability arising from NCDs, although there is substantial variation within LAC sub-regions. A 2011 study predicted that the four main NCDs, together with mental illness, will cost low- and middle-income countries around the world US$21 trillion over the next two decades.6 NCDs drain economic resources and affect the achievement of development goals including poverty reduction and social and economic development.7 Countries still battling high rates of infectious diseases, as well as NCDs, face a “double burden of disease.”

Young people in LAC account for 26 percent of the population—approximately 162 million people. Adolescents and youth are a tremendous resource that are overlooked in the fight against NCDs, yet they are a natural partner for preventing NCDs. The World Health Organization estimates that 70 percent of premature deaths in adults are the result of behaviors begun during adolescence and youth. Research indicates that behaviors associated with two of the key risk factors for NCDs—tobacco and alcohol use—are likely to start or become established during adolescence. Other risk factors related to poor diet and insufficient physical activity may begin during childhood, but adolescence is an opportunity to reinforce the benefits of positive behaviors through appropriate messages and programs. Experts estimate that the projected burden of NCDs could be cut in half or more by focusing on health promotion and disease prevention.8 Gender also plays a role in regard to risk factors and needs to be addressed. For example, while tobacco use is generally higher for males, rates are rising for females in some settings.9 Instilling healthy behaviors among youth today will be easier than changing well-entrenched negative behaviors later in life.