(June 2008) Obesity is a risk-factor for many preventable, highly prevalent, and potentially fatal chronic health conditions, including cardiovascular disease, diabetes, and some types of cancer. Obese individuals spend about one-third more on health care than similar individuals with normal weight. The extra health care costs from obesity exceed those associated with smoking or problem drinking.1 Rising rates of obesity can explain 27 percent of the growth in real health care spending between 1987 and 2001.2

The growing problem of obesity in Europe was documented in a recent study from the RAND Corporation using data from the 2004 Survey of Health, Ageing, and Retirement in Europe (SHARE). The 2004 SHARE collected information on health, psychological conditions, socioeconomic status, and social support in 10 European countries. The RAND researchers compared the prevalence of obesity and obesity-related health conditions among people in those countries ages 50 and above.3 Older adults were chosen for the comparison because the effects of obesity on health and health care outcomes may not materialize until later in life. 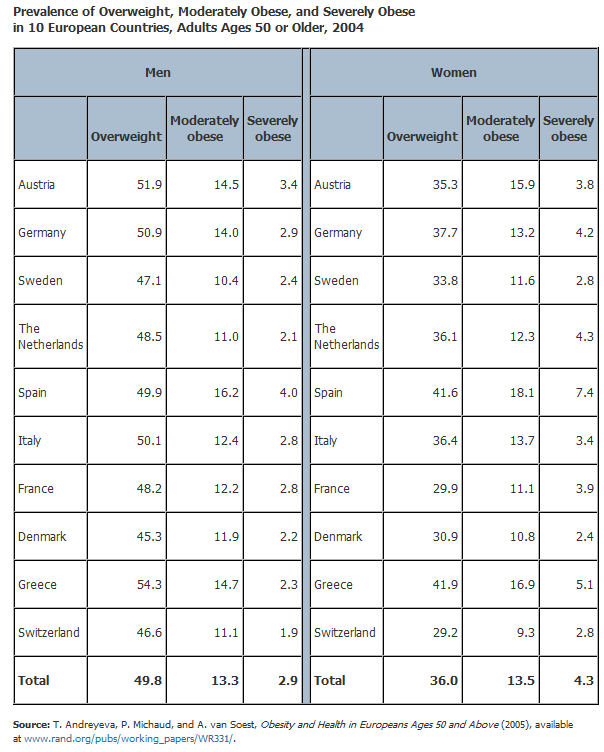 The percentage overweight or obese varied greatly across the 10 countries. Spain had the highest prevalence of moderate and severe obesity among men (20 percent) and women (26 percent). Sweden had the lowest rate of moderately or severely obese men (13 percent) and Switzerland had the lowest rate among women (12 percent). Switzerland, The Netherlands, Denmark, and Sweden had significantly higher rates of normal weight men than the SHARE average. The Nordic countries, Switzerland, and France had higher rates of normal weight women than the SHARE average.

The Link Between Obesity and Health

Overall, this study of elderly in selected European countries found that obesity is strongly associated with major health risk factors, but that there are also cross-national differences in the extent to which obesity is related to depression, heart disease, and high cholesterol levels. Moderate to severe obesity was significantly linked to poor or fair self-reported health, high cholesterol levels, hypertension, arthritis, and heart disease in both men and women. Spain had the highest prevalence of obesity and the highest prevalence of diabetes (about 14 percent among men and women). In Switzerland, the low obesity rate was mirrored in the low prevalence of diabetes (7 percent men, 4 percent women). However, France had relatively low obesity rates, but also the highest rate of doctor-reported high cholesterol levels in men (23 percent) and women (26 percent). Dietary, behavioral, cultural, and genetic differences may be responsible for such variations, as well as for differences in overall obesity rates among the countries.

Marc Meisnere is a program associate at the Population Reference Bureau.