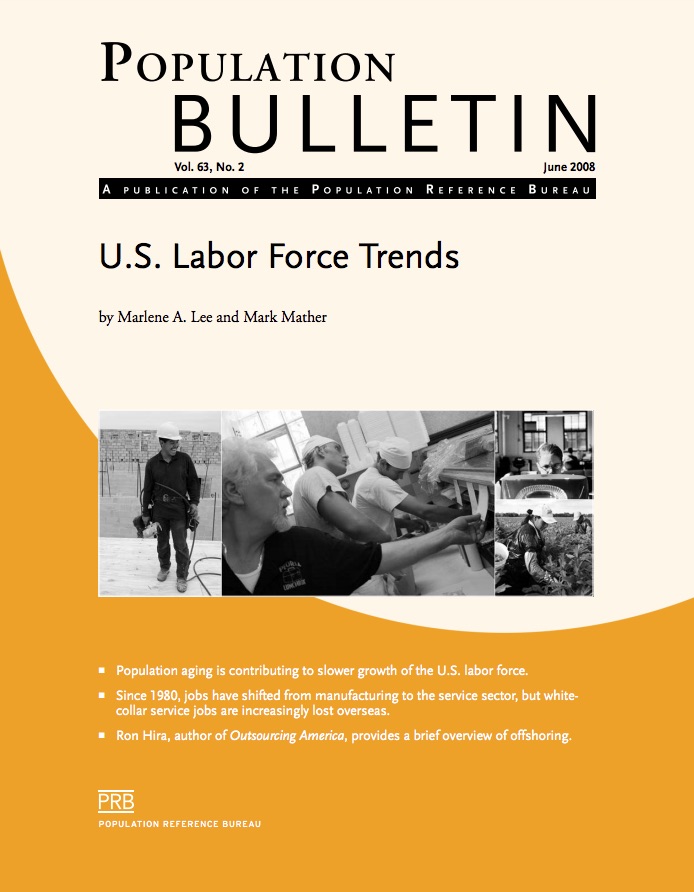 (October 2008) Offshoring is the movement of jobs and tasks from one country to another, usually from high-cost countries, such as the United States, to low-cost countries where wages are significantly lower. Offshoring is often confused with outsourcing, which is instead the movement of jobs and tasks from within a company to a supplier firm. The offshoring of manufacturing jobs has been occurring for decades, but the offshoring of service-sector jobs is an incipient phenomenon, emerging in substantial numbers since 2002 and growing rapidly.

Which Jobs and How Much

While there is widespread interest in measuring offshoring, available government data have significant limitations, making it nearly impossible to get an accurate picture of its scale and scope.1 The table below shows the results of an exploratory study by Princeton University economist Alan Blinder that attempts to fill this void. He estimates the 10 most vulnerable occupations, where U.S. workers in these jobs now face competition from overseas workers. Blinder estimates that about 30 million jobs, accounting for a little more than one-fifth of the U.S. workforce, are vulnerable to offshoring.

Occupations Most Vulnerable to Offshoring

Sources: Alan S. Blinder, “How Many U.S. Jobs Might Be Offshorable?” CEPS Working Paper 142 (March 2007); and Bureau of Labor Statistics, National Occupational Employment and Wage Estimates, May 2007 (www.bls.gov/oes/current/oes_nat.htm,accessed May 28, 2008).

Most studies identify whether the work can be done remotely and whether it can be easily reduced to a set of written rules and procedures as determining the likelihood that a job or activity may be transferred to another country. An occupation that requires being physically present with a customer is less vulnerable because it cannot be done remotely. Work which requires judgment combined with a deep understanding of the customer’s cultural context is difficult to do remotely because it cannot be easily written into a set of rules and protocols.

One important finding of many of the forecasts is that a large share of vulnerable jobs pay high wages and require advanced education (as shown in the table), making it more difficult to predict the overall impact of offshoring on the U.S. economy and to devise appropriate policy responses.

Firms use offshore jobs to reduce costs. A typical accountant in India earns about $5,000 per year, whereas a U.S. accountant earns about $63,000.2 These large wage differentials make it very attractive for companies to lower costs by substituting U.S. workers with lower-cost overseas workers. As the CEO of a major technology company put it, “If you can find high quality talent at a third of the price, it’s not too hard to see why you’d do this [send jobs offshore].”3 By lowering costs through offshoring, firms can gain a business advantage over their competitors.

Some factors that influence offshoring are driven by markets while others are based on government intervention. Companies selling to an overseas market sometimes find it easier to use local workers to customize a product because they better understand the tastes of the customers. Also, the markets in many emerging countries with a burgeoning new consumer class, such as India and China, are growing at three to four times the rate of markets in developed countries in North America and Europe. In other cases, governments are actively pursuing offshore outsourcing of U.S. and European jobs by offering an array of incentives, such as tax holidays (where the firm pays no income or property taxes), new facilities at reduced rates, and training subsidies. And some countries require the transfer of technology and high-wage jobs as a condition for selling in their markets.

Major changes in technology and social norms have enabled offshoring. Technological breakthroughs in telecommunications, the Internet, and collaborative software tools have dramatically lowered the costs of doing business remotely and across borders.

Additionally, shifts in employment relations and norms have made it much easier for firms to substitute foreign workers for U.S. workers.

Which Industries and Where

Information technology (IT) services was the first industrial sector to move a significant number of jobs offshore. Labor costs, which are often 70 percent of the net cost for IT firms, make the sector ripe for offshoring. Other information-intensive sectors, such as insurance and financial services, are aggressively offshoring. While not well publicized, occupations in a wide variety of other sectors (for example, journalism, law, medicine, and animation) are also moving offshore.

India has been the major beneficiary of white-collar offshoring from the United States, but almost every other developing country is trying to replicate India’s success. India has many advantages, including its large English-speaking educated workforce, its large diaspora living in the United States and the U.K., and its specialization in IT. Western Europe is about three to five years behind the United States in offshoring due to language barriers and greater protection for their domestic workers. But this phenomenon is growing in importance both economically and politically there as well.

Ron Hira is an assistant professor of public policy at Rochester Institute of Technology and co-author of Outsourcing America (AMACOM, 2008).