Planning for Retirement and End-of-Life Care 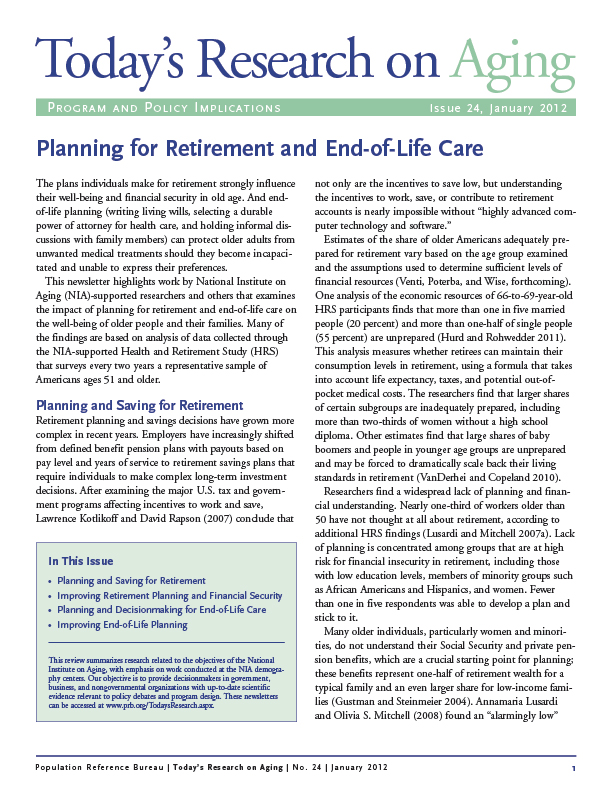 The plans individuals make for retirement strongly influence their well-being and financial security in old age.

And end-of-life planning (writing living wills, selecting a durable power of attorney for health care, and holding informal discussions with family members) can protect older adults from unwanted medical treatments should they become incapacitated and unable to express their preferences.

This newsletter highlights work by National Institute on Aging (NIA) supported researchers and others that examines the impact of planning on the well-being of older people and their families. Many of the findings are based on analysis of data collected through the NIA-supported Health and Retirement Study (HRS) that surveys every two years a representative sample of Americans ages 51 and older.

Retirement Planning: Researchers find a widespread lack of planning and financial understanding. Nearly one-third of workers older than 50 surveyed through the HRS have not thought at all about retirement. Lack of planning is concentrated among groups that are at high risk for financial insecurity in retirement, including those with low education levels, members of minority groups such as African Americans and Hispanics, and women. Individuals who demonstrate financial literacy by correctly answering basic questions are more likely to plan and to succeed in their planning; planners also accumulate more wealth as they near retirement.

Workers who successfully plan for retirement tend to seek out formal planning methods such as retirement calculators, retirement seminars, and financial experts, instead of relying on advice from relatives or co-workers. Research supports a variety of approaches, including financial education programs that include concrete goal-setting exercises designed to motivate individuals to plan and virtual reality tools that engage the imagination.

End-of-Life Care Planning: Research shows that the medical care elderly receive at the end-of-life is often different from what they would choose, and most elderly say they would prefer to die at home rather than in hospitals and nursing homes as most now do. More than one in four elderly Americans are incapacitated at the end of their lives and unable to make their own medical care decisions, according to the first large-scale study of advance directives based on the deaths of HRS participants. The researchers found that the overwhelming majority of older adults who died with advance directives received the care they preferred. Those with a living will or durable power of attorney for health care (two-thirds of the total) were less likely to die in a hospital or to receive aggressive care, results that were consistent with their wishes.

Planning for end-of-life care is more effective when it is seen as an ongoing process of decisionmaking among patient, family members, and health care providers, rather than the creation of a legal document. Verbal information provided over multiple educational sessions is most likely to lead to end-of-life plans. Timing is important; educational interventions that targeted seriously ill patients are most successful. But researchers find that one-size-fits-all approaches to end-of-life care planning may exclude large numbers of patients in an increasingly ethnically diverse society, and point out that the challenge is to “design, test, and implement programs which accommodate a range of individual and cultural beliefs, values, and preferences.”