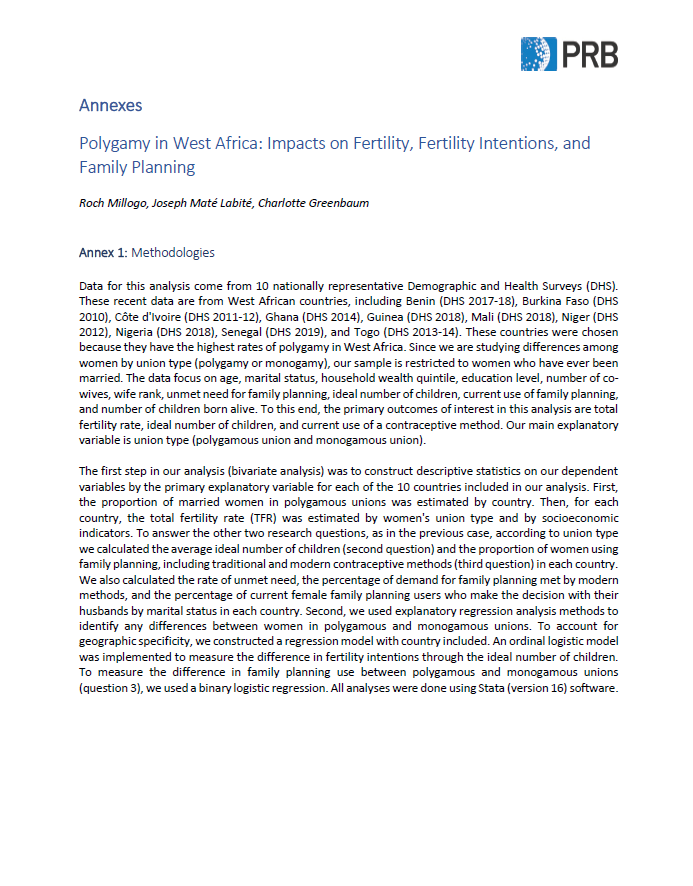 Many women in West Africa are in polygamous marriages, but the unique needs and preferences of this group are not well understood.

West Africa has one of the highest fertility rates in Africa and in the world.1 Several factors, including the persistence of subsistence farming and cultural and social norms that place a premium on having children, have contributed to a higher desire for children and higher fertility rates.2 However, different forms of marriage, including polygamy, have also contributed to the current landscape of fertility intentions in West Africa.

Recent Demographic and Health Surveys (DHS) data reveal that polygamy rates are high in most countries in the region (Figure 1), with the proportion of women in polygamous unions at or above 30% in eight countries and below 30%in two countries (Côte d’Ivoire and Ghana).

Figure 1: Proportion of Married Women in Polygamous Unions by Country

Several socioeconomic and cultural factors promote the practice of polygamy in West Africa, including:

To provide scientific answers to these questions, data from recent DHS in 10 West African countries were used as a framework for analysis: Benin (DHS 2017-18), Burkina Faso (2010), Côte d’Ivoire (2011-12), Ghana (2014), Guinea (2018), Mali (2018), Niger (2012), Nigeria (2018), Senegal (2019), and Togo (2013-14). We used this data to construct descriptive statistics and implement multivariate regressions to estimate the impact of polygamy on fertility, the average ideal number of children, and the proportion of women using family planning. Control variables included age, area of residence, household wealth quintile, level of education, occupation, number of co-wives, and ranking of wives. For additional information on our methodologies, please refer to Annex 1.

Women in polygamous unions do not have higher fertility rates than women in monogamous unions.

Regarding the socioeconomic characteristics of women, women in polygamous unions living in rural areas have significantly more children than those in urban areas. In addition, the TFR of women in polygamous and monogamous unions decreases as their standard of living and level of education increases. Our analysis also shows that women in the labor force have a significantly lower fertility rates than unemployed women, regardless of type of union (Annex 2).

Figure 4: Average Ideal Number of Children Among Married Women by Country and Type of Union

Women in polygamous unions are less likely to use family planning than women in monogamous unions.

The results indicate no significant difference in current fertility rates between women in polygamous and monogamous unions in most countries, which is similar to the results of previous studies in Nigeria.7 Our analysis validates these results for other countries in West Africa.

In addition, other studies similarly indicate that fertility intentions are higher among women in polygamous unions than among those in monogamous unions. This finding may be related to competition for fertility among co-wives. For example, studies of the Yoruba people in western Nigeria have shown that in polygamous couples, younger wives with lower status have a greater desire to improve their status by having a male child or by giving birth to more children than older wives.8 Other research has shown that competition between wives intensifies when women are more directly dependent on their husbands for emotional fulfillment or access to resources.9

Future research could build on this analysis by addressing some of the existing limitations. The first limitation relates to the lack of qualitative anthropological data that could help us understand certain behaviors in society that might have an impact on fertility rates. For example, in a society where there is a preference for boys, co-wives who do not yet have a boy might tend to compete for the birth of the husband’s “heir.” Another limitation of our analysis is the endogeneity between polygamy, fertility, and fertility intentions. Indeed, low fertility could encourage a man to take new co-wives. Finally, our study is limited by the absence of some variables that are strongly correlated with fertility, such as the wife’s perception of her husband’s fertility desires.

This study does not address all the sociocultural, economic, or other factors that might add important context to differences in fertility desires, nor does it attempt to explain all contributing factors. Explorations of other factors, such as ethnicity or religiosity, may be the subject of future research in this area in order to understand the implications of fertility desires among women in polygamous unions. Another aspect not included in this study is the role of the husband in decision-making in couples or polygamous unions, and the husband’s role as family decisionmaker on fertility or contraceptive use. The role of the husband and other factors influencing fertility choices among women in polygamous unions merits further exploration for programmatic and policy implications.

In the West African countries in this study, there are no specific policies or programs to address the family planning needs of polygamous couples. Apart from the legal status of polygamy in each country, it is important to recognize the extent of the practice in the region and to consider polygamy as one of the factors influencing levels of access to sexual and reproductive health care and services. This study demonstrates that there are identifiable differences in fertility desires and contraceptive use between women in polygamous and monogamous unions that deserve to be incorporated into programs and awareness campaigns.

With a deeper understanding of the sociocultural, religious, and gendered elements of decision-making in polygamous unions, policymakers and program managers responsible for access to sexual and reproductive health care and services should:

8 P. O. Olusanya, “The Problem of Multiple Causation in Population Analysis, With Particular Reference to the Polygamy-Fertility Hypothesis,” The Sociological Review, 19, no. 2 (1971): 165-78; Osei-Mensah Aborampah, “Plural Marriage and Fertility Differentials: A Study of the Yoruba of Western Nigeria,” Human Organization 46, no. 1 (1987): 29-38. 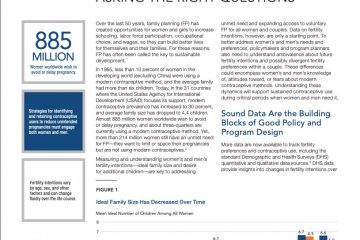