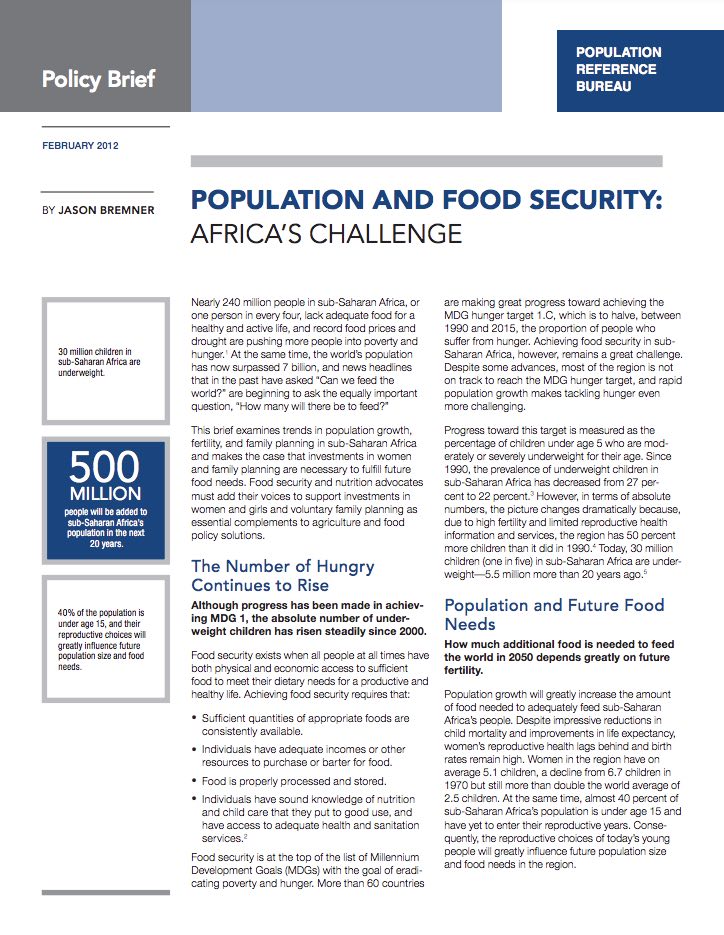 (March 2012) Nearly 240 million people in sub-Saharan Africa, or one person in every four, lack adequate food for a healthy and active life, and record food prices and drought are pushing more people into poverty and hunger.1 At the same time, the world’s population has now surpassed 7 billion, and news headlines that in the past have asked “Can we feed the world?” are beginning to ask the equally important question, “How many will there be to feed?”

The Number of Hungry Continues to Rise

Although progress has been made in achieving MDG 1, the absolute number of underweight children has risen steadily since 2000.

Food security exists when all people at all times have both physical and economic access to sufficient food to meet their dietary needs for a productive and healthy life. Achieving food security requires that:

Food security is at the top of the list of Millennium Development Goals (MDGs) with the goal of eradicating poverty and hunger. More than 60 countries are making great progress toward achieving the MDG hunger target 1.C, which is to halve, between 1990 and 2015, the proportion of people who suffer from hunger. Achieving food security in sub-Saharan Africa, however, remains a great challenge. Despite some advances, most of the region is not on track to reach the MDG hunger target, and rapid population growth makes tackling hunger even more challenging.

Progress toward this target is measured as the percentage of children under age 5 who are moderately or severely underweight for their age. Since 1990, the prevalence of underweight children in sub-Saharan Africa has decreased from 27 percent to 22 percent.3 However, in terms of absolute numbers, the picture changes dramatically because, due to high fertility and limited reproductive health information and services, the region has 50 percent more children than it did in 1990.4 Today, 30 million children (one in five) in sub-Saharan Africa are underweight—5.5 million more than 20 years ago.5

How much additional food is needed to feed the world in 2050 depends greatly on future fertility.

Population growth will greatly increase the amount of food needed to adequately feed sub-Saharan Africa’s people. Despite impressive reductions in child mortality and improvements in life expectancy, women’s reproductive health lags behind and birth rates remain high. Women in the region have on average 5.1 children, a decline from 6.7 children in 1970 but still more than double the world average of 2.5 children. At the same time, almost 40 percent of sub-Saharan Africa’s population is under age 15 and have yet to enter their reproductive years. Consequently, the reproductive choices of today’s young people will greatly influence future population size and food needs in the region.

Sub-Saharan Africa’s population is projected to more than double from 856 million today to about 2 billion in 2050, even if couples choose much smaller families over the coming decades.6 A rapid decrease in fertility (the average number of children a woman will bear in her lifetime), however, is far from certain (see Box 1). Fertility declines when women and their partners desire a smaller family and choose to delay or space their births, and when they know about and can access a variety of contraceptive methods. Economic development and women’s education foster the use of family planning and smaller families; however, a number of challenges contribute to sustained high levels of fertility across the region. In many countries, high child mortality and traditional cultural views contribute to couples still preferring large families. Gender inequities result in many girls having children early in adolescence and having little power over the number of children they bear. And limited access to family planning results in millions of unintended pregnancies. Furthermore, current levels of funding for family planning and reproductive health from donors and African governments fail to meet current needs, much less the future needs of the growing number of people entering their reproductive years.7 Failure to increase resources for family planning will further delay reproductive health gains and fertility declines and could result in a far larger population and thus greater-than-anticipated food needs in sub-Saharan Africa by 2050.

This policy brief was written by Jason Bremner, program director, Population Health and Environment, at the Population Reference Bureau; with guidance from Lori Ashford, James Gribble, and Charlotte Feldman-Jacobs of PRB. Special thanks to Heather D’Agnes, Irene Kitzantides, Shelley Snyder, Gloria Coe, Sally Abbot, Emily Hogue, and Maura Mack of the U.S. Agency for International Development (USAID) who provided input. This publication is made possible by the generous support of the American people through USAID under the terms of the IDEA Project (No. AID-OAA-A-10-00009). The contents are the responsibility of the Population Reference Bureau and do not necessarily reflect the views of USAID or the United States government.

The United Nations develops low, medium, high, and constant population projections for every country and region in the world, and the UN medium projection estimates that population in sub-Saharan Africa will more than double by 2050 to almost 2 billion. This medium projection assumes that fertility will decline from 5.1 children per woman today to 3.0 children by 2050. Even the less-optimistic high population projection—2.2 billion people in sub-Saharan Africa by 2050—assumes a decline to 3.5 children by 2050. Reducing fertility requires significant investments in women and girls such as education and improved access to family planning information and services.

The UN’s medium population projection assumes that fertility rates in developing countries will do what they did in developed countries—decline to approximately two children per woman on average or less by 2100. For example, medium projections assume that the average number of children a woman in the Democratic Republic of Congo (DRC) will have in her lifetime will decline from 6.3 today to 2.7 in 2050. For fertility to decline to 2.7, the use of modern contraceptive methods would need to grow from 6 percent of women in the DRC today to more than 70 percent of women by 2050. Even with this uptake of contraceptives, population in the DRC will increase 120 percent by 2050, growing from 66 million today to 148 million.

Fertility Assumptions and Population Projections in the Democratic Republic of Congo