The Path to Naturalization

Many immigrants become naturalized U.S. citizens and vote; some hold political office, including California Governor Arnold Schwarzenegger. The U.S. government encourages legal immigrants who are at least 18 years old, have been in the United States at least five years, and who pass a test of English and civics to become naturalized citizens.

However, more Mexicans and Latin Americans are naturalizing, in part because their governments have become more supportive of their citizens going abroad to become dual nationals. More people identify themselves as Latinos than as African Americans in the United States. However, during the 2008 elections, African Americans cast almost twice as many votes as Latinos, reflecting the fact that many Latinos are not U.S. citizens.1 Latinos are sometimes called the sleeping giant in the U.S. electorate that could tilt the political balance toward Democrats as their share of the vote increases—two-thirds of the Latinos who voted in 2008 elections supported President Obama.

Guest Workers in the United States 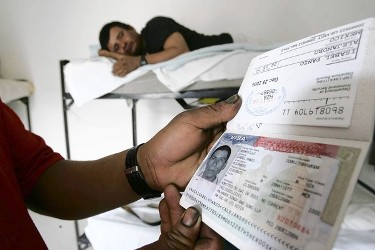 Beginning in the 1980s, Congress changed immigration laws more frequently. The Immigration Reform and Control Act (IRCA) of 1986 embodied a compromise to reduce illegal migration. For the first time, the federal government set fines on U.S. employers who knowingly hired unauthorized workers and legalized most of the estimated 3 million to 5 million unauthorized foreigners in the United States (see Figure 3). IRCA’s sanctions failed to reduce illegal migration, largely because unauthorized workers used false documents to get jobs, and legalization was tarnished by widespread fraud that allowed over 1 million rural Mexican men to become U.S. immigrants because they asserted they had performed qualifying U.S. farm work.2

Illegal migration and welfare spending rose in the 1990s, and Congress responded in 1996 with the Personal Responsibility and Work Opportunity Reconciliation Act (PRWORA) and the Illegal Immigration Reform and Immigrant Responsibility Act (IIRIRA). Welfare reform reduced federal cash payments to both U.S. citizens and immigrants, and erected stronger barriers between unauthorized foreigners and welfare benefits. IIRIRA required U.S. residents sponsoring their family members for immigrant visas to have incomes above the poverty line to reduce the chances that the newcomers would need welfare assistance.

The Sept. 11, 2001, terrorist attacks were committed by foreigners who had entered the United States legally; the attacks highlighted the failure of the U.S. government to track foreigners despite a mid-1990s law requiring foreigners to be checked as they enter and leave the country. In response, the U.S. government gained the power to detain foreigners deemed to be threats to national security, and most immigration-related agencies were consolidated in the new Department of Homeland Security. However, the number of unauthorized foreigners rose steadily, from 8 million in 2000 to 12 million in 2007, prompting Congress to debate measures to deal with illegal immigration.At the same time, employers complained of labor shortages and the unemployment rate dipped below 5 percent in 2006 and 2007.

The congressional debate mirrored divisions among Americans about how to deal with unauthorized foreigners. In 2005, the House of Representatives approved an enforcement-only bill that would have added more fences and agents on the Mexico-U.S. border and made “illegal presence” in the United States a felony, complicating future legalization.3 Hispanic leaders condemned the House bill and organized demonstrations that culminated in a “day without immigrants” on May 1, 2006.

Figure 3
Unauthorized Immigrants as Share of Foreign-Born by State, 2008

The Senate took a different approach, approving the Comprehensive Immigration Reform Act in 2006 to beef up border and interior enforcement, as in the House bill. However, the Senate bill would have provided an “earned path” to legalization by allowing unauthorized foreigners to pay fees and pass English tests to become legal immigrants and would have created new guest worker programs to satisfy employers complaining of labor shortages.

There was strong resistance to this amnesty for unauthorized foreigners, prompting the Senate to consider a tougher enforcement-and-legalization bill in 2007. For example, unauthorized foreigners would have had to pay fees and learn English and also return to their country of origin and re-enter the United States legally in order to become legal immigrants.

Immigration returned to the headlines in spring 2010 after Arizona enacted the Support Our Law Enforcement and Safe Neighborhoods Act, which made it a crime to be in the state illegally. Immigrants in Arizona now must carry proof of their legal status, and show IDs to police officers who suspect they may be illegally in the United States; violators can be fined or jailed. President Obama criticized the Arizona law and said that its enactment demonstrated the urgency of dealing with immigration reform. Hispanic groups predicted widespread racial profiling and mistaken arrests and sued to block implementation of the Arizona law. However, polls found broad support for the Arizona law. A May 2010 Wall Street Journal/NBC poll reported that almost two-thirds of U.S. adults supported the Arizona law, even though two-thirds of respondents agreed that it would likely lead to discrimination against legal Hispanic immigrants. In the same poll, 70 percent of Latinos opposed the Arizona law.4

The U.S. Senate has been trying to develop a bipartisan three-pronged bill like those debated in 2006 and 2007. Just after the Arizona law was enacted, Senate Democrats released a framework for comprehensive immigration reform without Republican support. The framework, which includes more enforcement, legalization, and new guest worker programs, is awaiting Republican supporters.

Under this framework, border enforcement benchmarks would have to be met before legalization can begin. There would be more Border Patrol agents, an entry-exit system for foreign visitors, and a new system under which all U.S. workers would have to present secure cards when hired to prove their identity and right to work. All employers would have to use scanners to check new hires. The Democrats’ proposal offers a relatively simple path to legal status for the estimated 11 million illegal migrants. Unauthorized foreigners in the United States on the date of enactment could register and pay fees to obtain a new Lawful Prospective Immigrant status that would allow them to live and work legally. After eight years, they could become immigrants by passing English and civics tests and paying more fees. The framework would also make it easier for foreigners who earn advanced degrees from U.S. universities in science and engineering to become immigrants, and would create a new guest worker program that would allow low-skilled foreigners to work in the United States for six years and become legal immigrants if they satisfied integration requirements such as learning English.

A Nation of Immigrants Unsure About Immigration

The United States is a nation of immigrants unsure about immigration in the 21st century. The UN estimates that 214 million people lived outside their country of citizenship in 2010—three percent of the world’s population are international migrants—and the United States has about 20 percent of the world’s migrants. There is widespread agreement that the U.S. immigration system is “broken”—nearly 30 percent of foreign-born residents are unauthorized and drug-related violence and death is widespread on the Mexico-U.S. border. But there is listtle agreement on how to fix the system. How should the U.S. government prevent illegal migration? What hurdles should unauthorized foreigners have to overcome before they can become legal U.S. immigrants? Should new guest worker programs make it easier for employers to hire migrant workers?

Interest groups from the U.S. Chamber of Commerce to the AFL-CIO, and from La Raza to the Catholic Church, favor comprehensive immigration reform but disagree on vital details that range from exactly how to keep unauthorized workers from getting jobs to how many additional guest workers should be admitted. States and cities are complicating matters by entering the fray; some enact sanctuary laws prohibiting police from asking about immigration status, while others require police to check immigration status.

Meanwhile, the status quo, though generally deplored, continues in part because the economic actors most directly affected—unauthorized workers and their employers—are generally getting what they want. Migrant workers earn more than they could at home, and their employers pay lower wages than if immigration were more effectively controlled.

Philip Martin is professor of agricultural economics at the University of California-Davis, chair of the University of California’s Comparative Immigration and Integration Program, and editor of Migration News. Elizabeth Midgley is a long-time observer and analyst of U.S. immigration trends and policy formation, starting with her coverage of immigration issues as a producer for CBS News and during her tenure as a trustee of the German Marshall Fund of the United States.