Population Growth and Deforestation: A Critical and Complex Relationship

During the last two decades, agricultural expansion, logging, development, and other human activities caused the deforestation of more than 120,000 square kilometers each year. In contrast, an area only one-tenth that size was regained due to reforestation efforts and natural re-growth.1 This is the continuation of an historical process that has left the world with less than half of its original forests. While population growth and density are unquestionably related to forest cover trends, there is no simple way to describe or predict that association. Not surprisingly, the relationship is as complex as the regional and cultural variations in human societies and the changes in those societies over time.

Nonetheless, important patterns are beginning to develop from the many studies that have been undertaken and the evolving debate around them. An overview of studies conducted in the 1980s and 1990s reveals a strong relationship between population growth and deforestation in Central America, East and West Africa, and South Asia, but a much less clear association in Amazonia (South America) and Central Africa.2 In a number of more developed countries, such as the United States, China and Russia, forest cover has been recovering for some time after extensive earlier deforestation.3

From the deforestation studies to date, a few generalizations can be made. At extremely low population densities (less than one to two persons per square kilometer), it is possible to maintain large amounts of forest intact in areas where the population can be sustained primarily through the harvesting of non-timber forest products rather than by agriculture.4 However, even in sparsely inhabited areas, external forces such as demand for timber or cattle in other parts of the country or world can lead to deforestation that is not closely related to local population growth. This has been the case in parts of the Brazilian Amazon.5

As agriculturally based population density increases in and near forested areas, the strongest relationship between population growth and deforestation occurs, as local people and young migrant families arrive at the forest frontier and clear land to provide more area for subsistence farming.6 The poorer the soil quality, the lower the agricultural production per hectare, and the more land per capita is likely to be cleared. In Central America, population density and loss of forest cover are closely related at many scales: at the regional and national level, and in local areas inside and near forest reserves, such as the Maya Biosphere Reserve in Guatemala.7 This relationship may overpower efforts to manage forests in protected areas, particularly where the local population is primarily dependent on subsistence agriculture (see figure). 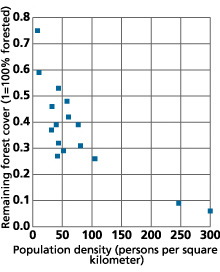 In the case of more-developed countries, the relationship becomes much more complex. The population begins to shift away from dependence on agriculture as a livelihood and agriculture uses more capital and technology and less labor. In addition, food, fuel, and timber needs may be met through imports from other areas of the country and world. Thus, the northeastern part of the United States, almost entirely deforested by the middle of the 19th century, is now largely reforested because people abandoned agricultural uses of the land and now import most of their food and fuel and some of their timber. Both population and per capita consumption may continue to increase but are no longer associated with local forests and land use. This pattern is also occurring in parts of Europe and some countries in the former Soviet Union.

In a few large Asian countries, aggressive forest policy in the recent past has more than offset losses of forest cover from agricultural expansion and development. In spite of significant human population increases during the 1990s, India added 381,000 hectares (net) through tree plantation programs.8 One recent study has suggested that this increase in forests is a function of India’s relatively closed economy and the resultant need to ensure domestic production of forest products, and therefore might not have occurred had India’s external markets been more open.9 Similar plantation efforts in China have produced an even larger net increase in forests. The general principle from the experience of countries as different as the United States, China, and India may be that after going through an initial deforestation phase, the combination of the scarcity of forest products and rising economic fortunes can lead societies to value, replant, and manage forests.

It is important to note that planted forests are very different from original forest cover in terms of species composition (planted forests are often monocultures), ecosystem functions, and their ability to support a wide range of plant and animal species and withstand stress such as drought and disease. Natural tropical forests contain a large percentage of the world’s remaining biodiversity. More than half of remaining forested land is found in less-developed countries, and many tropical forests are in areas with high population growth rates, high poverty, low access to reproductive health services, and rapid migration.

One conservation challenge is that average population density and growth rates are significantly greater in areas with high biodiversity than in the other habitable parts of Earth’s surface. For instance, in sub-Saharan Africa, human population density is greatest in area with the highest number of species of birds, mammals, snakes, and amphibians. Some of these species are threatened with extinction. Nearly 20 percent of the world’s population (1.2 billion people) lives in these “biodiversity hotspots.” This makes conflicts between biodiversity and forest conservation, population, and development almost impossible to avoid.

A critical wild card in the population-forests equation is global, regional, and local climate change, which can alter temperature and precipitation patterns sufficiently so that the existing forest cover type can no longer be supported. This is particularly true in areas with significant dry seasons, where even a slight decrease in rainfall can produce more frequent and more destructive forest fires, preventing the regrowth of certain species and favoring others, or even changing the ecosystem permanently from forest to grasslands. The demographic characteristics of an area may facilitate this change by producing a more flammable mixture of fields and forests or by providing fire sources. In the long run, climate change is also likely to change the nature of human demands on forests, particularly in agricultural communities.