Poverty in America: Beyond Welfare Reform 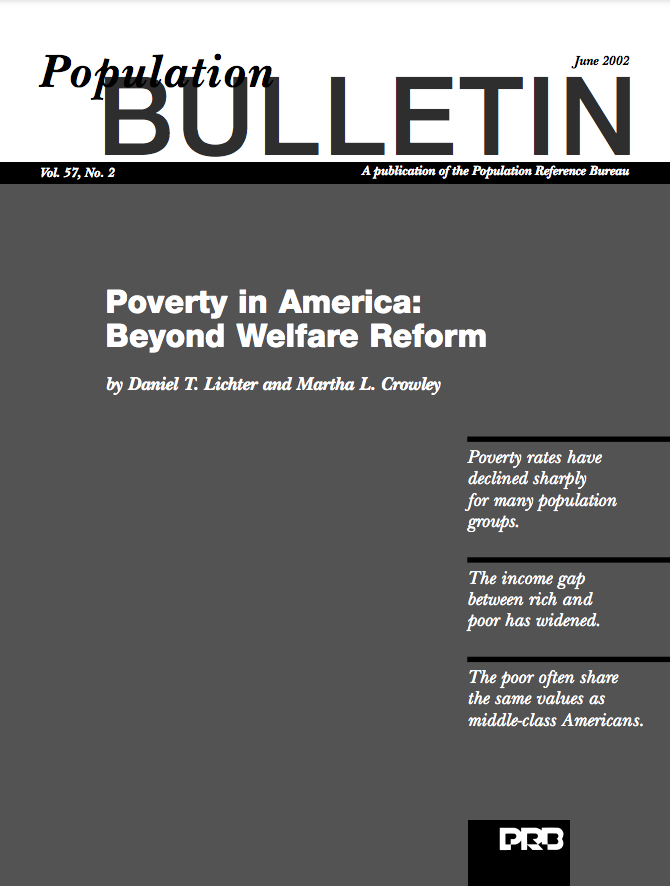 Population Bulletin, vol. 57, no. 2. Poverty in America: Beyond Welfare Reform

(June 2002) Throughout its history, the United States has struggled with the paradox of poverty amidst affluence. Why do so many people struggle economically in a nation blessed, by almost any international or historical standard, with abundant opportunities? Are the poor themselves to blame? Or are they victims of unequal educational opportunities, racism and sexism, or an economic system that favors the rich over the poor? As a rich society, how can we help poor families without fostering economic dependency, unwed childbearing, or other unintended consequences that may perpetuate rather than end poverty? How do we redress persistent racial or ethnic inequality without affecting the opportunities of others? How do we help poor children without rewarding decisions of parents that may have led to their children’s disadvantaged circumstances?

The paradoxes of American poverty are not new. What is new is the intensity of public policy attention directed at America’s poor population. More attention is being paid now than at any time since the War on Poverty of the 1960s. One major reason for the increased attention is America’s latest overhaul of the welfare system. The 1996 Personal Responsibility and Work Opportunity Reconciliation Act (PRWORA) ended “welfare as we know it.” One major target of reform was the Aid to Families with Dependent Children (AFDC) program, which provided cash payments to very low-income families with children. The legislation sought to end AFDC and other government assistance by promoting self-sufficiency and personal responsibility through “work first” programs. PRWORA set strict time limits on cash assistance, imposed work requirements, and encouraged marriage and two-parent families as a context for having and raising children. Welfare reform legislation has also challenged us to re-examine the circumstances of America’s least advantaged residents. The reforms did not set out to reduce poverty.

Welfare reform has been a big success, at least as measured by the reduction in welfare caseloads. The number of families receiving welfare declined by more than 50 percent between 1994 and 2000, and the percentage of families receiving cash assistance is lower than it has been since 1960. In 2000, only 2.1 percent of the U.S. population received cash assistance (through the Temporary Assistance for Needy Families [TANF] program). Such success, which was helped by a booming economy, silenced many early critics of welfare reform. Happily, welfare caseload declines have occurred alongside reductions in poverty, even among female-headed families with children. Most of the early predictions that poverty and hardship would increase among the most vulnerable segments of the population have not occurred, at least not yet. The welfare reform bill is up for reauthorization in late 2002, and many poverty and welfare rights advocates argue that PRWORA’s emphasis on reducing caseloads should be balanced by placing a higher priority on reducing poverty.

Indeed, welfare reform comes with an obligation to refocus our attention on those left behind, those remaining at the economic margins of American society. Who are they? Why are they still poor? Why does it matter? What can we do about it? This Population Bulletin evaluates whether America’s poor are different today: Are they better or worse off than in the past? And it examines whether persistent stereotypes and negative images of poor people match the current reality. Has welfare reform led America’s poor to adopt a new or different set of values and standards of behavior? Or does poverty, especially during childhood, transmit socioeconomic disadvantages that carry over from one generation to the next?