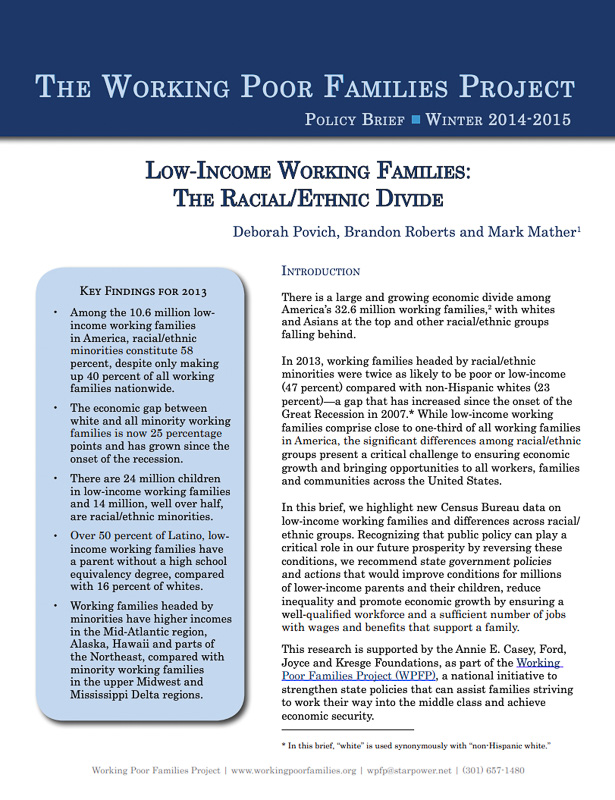 In 2013, U.S. working families headed by racial/ethnic minorities were twice as likely to be poor or low-income (47 percent) compared with non-Hispanic whites (23 percent) according to a new report from the Working Poor Families Project in collaboration with the Population Reference Bureau (PRB).

This gap has increased since the onset of the Great Recession in 2007, reflecting a “large and growing economic divide” with Hispanic and black families falling behind, the report concludes.

“Disparities cannot be erased overnight, but there are policies that can help reduce the economic gaps between groups,” notes Mark Mather, associate vice president for U.S. Programs at PRB and report co-author. Examples include increased access to education and training for people in low-income families, and initiatives that “make work pay” such as wage minimums, paid sick leave, tax credits, and access to retirement savings plans, he says.

A 2014 PRB Population Bulletin, “The Demography of Inequality,” showed that eliminating racial/ethnic economic differences would potentially reduce the number of U.S. children in poverty by 45 percent in 2050, compared with the projected number of poor children if current disparities persist.