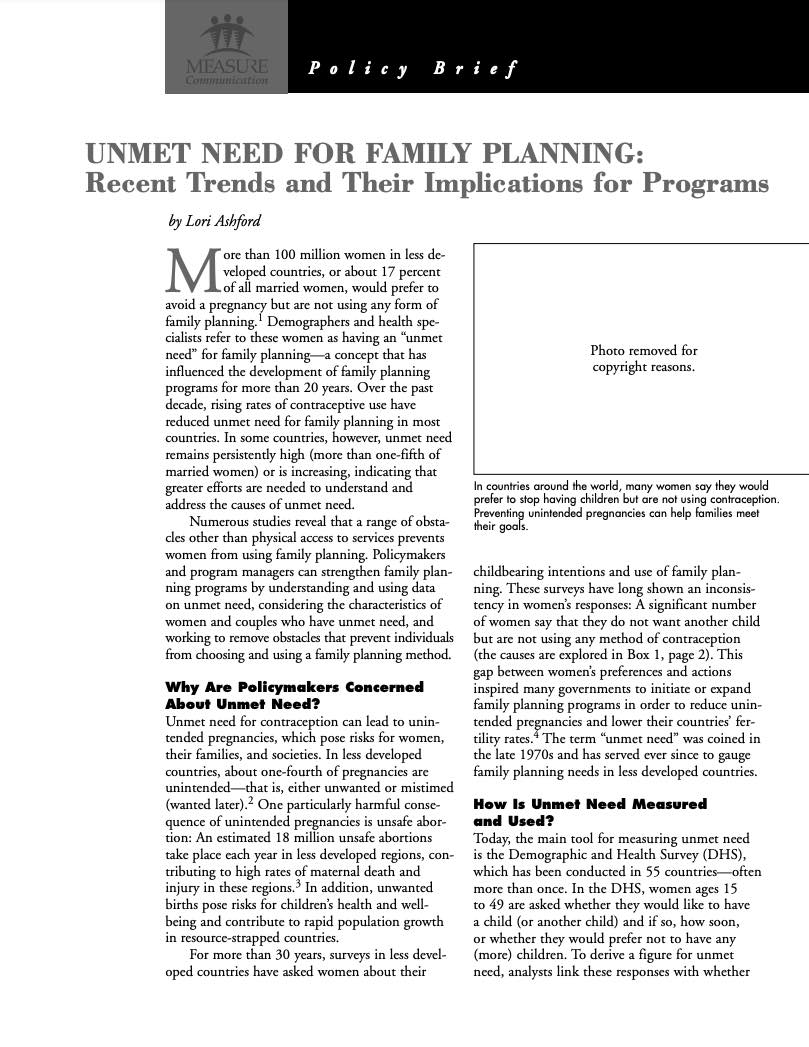 Unmet Need for Family Planning: Recent Trends and Their Implications for Programs

(May 2003) Use of family planning improves health by enabling couples to bear children during the healthiest times for themselves and their children. Family planning helps couples to space the births of their children and to prevent unwanted pregnancies. Some family planning methods also help people avoid sexually transmitted infections (STIs), including HIV. In Cambodia, contraceptive use has increased and fertility rates have declined over the past decade. Nevertheless, many women who say they would prefer to stop having children or to delay their next birth are not using contraception. Meeting the reproductive needs of men and women will require continued political and financial commitment from the Royal Government of Cambodia to increase access, improve quality of services, and minimize costs of family planning services.

The ability to space and limit childbearing can increase women’s autonomy. About 57 percent of couples in developing countries use family planning today, compared with only 10 percent in the 1960s.1 It is possible to observe upward trends in contraceptive use even over a short period in Cambodia. In 1995, only 13 percent of currently married women were practicing family planning, as compared to 24 percent in 2000. Despite this increase, Cambodia has the lowest contraceptive prevalence rate in Asia. Only Yemen, at 21 percent, is lower.2 Of those practicing family planning, 19 percent are using modern methods — such as daily and monthly (Chinese) pills, condoms, IUDs, injectables, and female sterilization — and 5 percent are using traditional methods.3

The proportion of women practicing family planning varies by age, region, and education. Married women ages 35 to 39 have the highest rate of modern contraceptive use (25 percent), while married women ages 15 to 19 have the lowest (6 percent), followed by women ages 45 to 49 (8 percent). Modern contraceptive use among currently married women is higher in urban areas (23 percent) than in rural areas (18 percent). Of women practicing family planning, those with secondary or higher education are more likely to use modern methods (23 percent) than those with no education (16 percent).4

Use of Modern Contraceptives by Currently Married Women, Cambodia 2000

Increase in family planning use has brought about a marked decline in fertility worldwide. Fertility has dropped from an average of about six children per woman in developing countries in the 1960s to about three today.5 Cambodia has experienced a period of fertility decline from 5.4 to 4.0 children per woman ages 15 to 49 in the last 10 years. This decline has taken place at approximately the same pace in urban and rural areas throughout almost all provinces. The greatest decline occurred in Phnom Penh — from 4.0 to 2.1 children per woman. Mondol Kiri and Rotanak Kiri did not follow this trend: There, fertility increased during this period by 0.6 children per woman.6

Despite overall declines in fertility, average family size in Cambodia remains large. According to the 2000 Cambodia Demographic and Health Survey (CDHS), the total fertility rate (TFR) — a measure of how many children a woman will have in her lifetime on average — is 4.0. This is a higher level than the world’s average TFR (2.6) and the second highest in Southeast Asia where countries average 2.5 children per woman. Only Laos, at 4.8, is higher.7

The TFR in Cambodia varies by residence (urban or rural) and level of education. The TFR in urban areas (3.1) is one child lower than that in rural areas (4.2). Women with no education have a higher TFR (4.5) than women with primary (4.0) or secondary and higher education (2.9). The TFR also varies widely by region: Phnom Penh has the lowest TFR (2.1) while Mondol Kiri/Rotanak Kiri (6.3) has the highest.8

Many individuals enter their childbearing years with reproductive goals — not only the number of children they would like to have, but when they would like to have them. Women’s ability to have the number of children they want, when they want them, is central to the quality of their lives and the well-being of their families. The ability to achieve this goal, in turn, has important consequences for the social and economic well-being of the communities and countries where they live.9

The CDHS measured women’s reproductive intentions by asking currently married women whether they want to have another child and, if so, how soon. Thirty-five percent of such women say they have had enough children (see Figure 2). Twenty-four percent say they want to have at least one more child. However, two-thirds of those women would prefer to wait at least two years before having another child or are unsure about the best timing for their next child. More than a quarter (28 percent) are not sure of whether they would like to have another child. Further studies should be conducted to learn more about these women and what kinds of information and services are appropriate to their needs.10

Moreover, these data do not represent the views of the women’s partners and are, at best, only a partial portrait of the couples’ reproductive goals. More information is also needed on men’s reproductive intentions, as men play an important role in both the formation and the achievement of family-size goals.

More than 100 million women in developing countries would like to prevent or delay a future pregnancy but are not using contraception. These women are considered to have an “unmet need” for family planning. Information on unmet need can assist service providers in identifying and targeting women who most need of family planning services, while recognizing women’s changing fertility goals.

In Cambodia, 33 percent of married women say they would prefer to space their births by at least two years or limit childbearing altogether but are not using family planning — making unmet need in Cambodia one of the highest in Southeast Asia. Seventeen percent say they would prefer to wait at least two more years before having another child, and 15 percent would like to limit childbearing altogether. If all married women who say that they want to space their next birth or stop childbearing were to use family planning methods, contraceptive use would rise from 24 percent to 56 percent.11

Women’s unmet need for family planning decreases with higher levels of education. Thirty-five percent of women with no education have an unmet need, as compared to 26 percent of women with secondary or higher education. Unmet need is higher among rural women (34 percent) than urban women (27 percent). Unmet need also varies across province — Kampong Chhnang has the highest unmet need (50 percent) while Phnom Penh has the lowest (19 percent). More research is needed to identify and overcome obstacles that keep women, especially those in rural areas, from using family planning services.12

Although women are having fewer children now than they have had in the past 10 to 15 years, there are still gaps between the number of children women would like to have and the number they are currently having. This is particularly true for women in rural areas, those with little education, and those living in remote provinces. While the expansion of family planning services is needed throughout the country, programs should strive to make services geographically and financially accessible to the entire population, including the poor and those living in distant areas. Clearly, women will need the continued support of governments and service providers as they try to achieve their reproductive goals. Easier access to family planning services, dependable supplies, and a greater choice of appropriate and suitable methods are all part of initiatives that the Royal Government of Cambodia must continue in order to provide good quality reproductive health care.

By the Staff of the Department of Planning and Health Information, Ministry of Health, the Reproductive Health Association of Cambodia, and PRB.