Recent Surveys Fill in Gaps in Our Knowledge of Fertility

(December 2014) Looking over data released in 2014, what new information did the Demographic and Health Surveys (DHS) and the Multiple Indicator Cluster Surveys (MICS) give us?

The DHS are nationally representative surveys taken in over 70 countries, funded by the United States Agency for International Development and other international agencies. The surveys collect information on demographic and health topics, such as the total fertility rate, contraceptive use, infant and child mortality, and the nutritional status of children. MICS are taken under the general guidance of UNICEF and collect similar information, with a special emphasis on child health.

Preliminary results from the surveys are released rather quickly, about six months after they are taken. That is why you often see them referenced to 2013.

Not all surveys produce perfect results. Some surveys produce questionable results and the difficulties encountered are described in the survey reports. These explanations are very important for a proper evaluation of the results. Even so, surveys fill a huge void in statistics and in our knowledge of developing countries.

Countries Where the TFR Rose or Remained Stationary

Egypt’s just-released DHS recorded one of the few increases in the total fertility rate (TFR) in a DHS. (In the DHS, TFRs are given for the three years preceding the survey date.) In 2014, the DHS placed Egypt’s TFR, the average number of children per woman, at 3.5, higher than the 3.0 TFR from the 2008 survey. The increase is in rough agreement with the number of births recorded in the Egypt vital registration in recent years. A further indication that the TFR rose is given in the contraceptive use table in the 2014 report: Use of the IUD dropped from 36 percent of women using in 2008 to 30 percent in 2014, although the overall contraceptive use remained the same. The rise in TFR is thought to be due to a society that has become more traditional and to a faltering national family planning program. 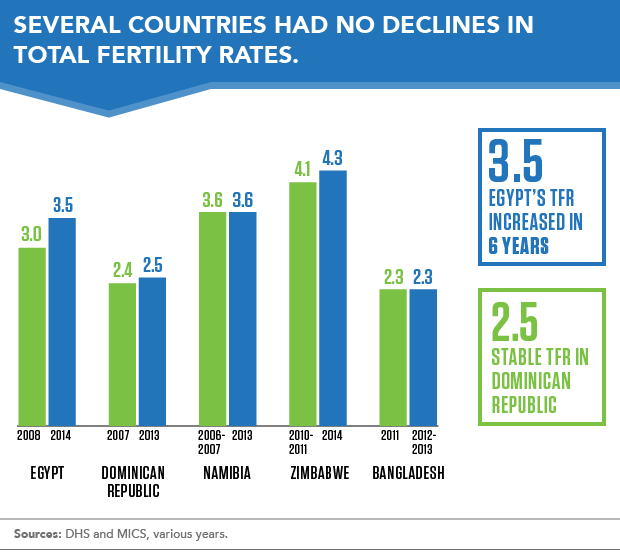 Zimbabwe is another example where the TFR may well have risen, or at least stopped its decline. The 2014 MICS paced the TFR at 4.3, up from 4.1 in the 2010-2011 DHS. In the MICS, modern contraceptive prevalence jumped to 66 percent of women using from 57 percent in the 2010-2011 DHS. While the use of contraception is quite high, the most commonly used method is the pill at 44 percent. It would appear that women use to pill in part to space births rather than limit their number.

In the Dominican Republic, the TFR is essentially stable: 2.4 in the 2007 DHS and 2.5 in 2013. At the same time, the percentage of women who said that they were sterilized dropped from 47 percent to 41 percent. Overall modern contraceptive use fell slightly from 70 percent in 2007 to 69 percent in 2013; other clinic and supply methods, such as the pill, rose to compensate for the decline in sterilizations, a permanent method. Nonetheless, does this indicate that the TFR has paused its decline for the longer term?

A similar situation was observed in Namibia where there was no change in the 3.6 TFR measured in 2013 from that of the 2006-2007 DHS. There was also little change in contraceptive use between the two surveys.

And results from Gambia’s first DHS, taken in 2013, show a TFR of 5.6 with a modern contraceptive prevalence rate of only 8 percent.

In Bangladesh, two recent surveys suggest that fertility decline has stopped. Both the 2011 DHS and the 2012-2013 MICS reported a TFR of 2.3. The contraceptive prevalence rate in the MICS was somewhat higher at 62 percent for all methods and 59 percent for modern methods, compared to 61 percent and 52 percent, respectively, from the DHS. A 2014 DHS has just completed fieldwork, so we will see if another “stall” in fertility decline has appeared.

Countries Where the TFR Dropped 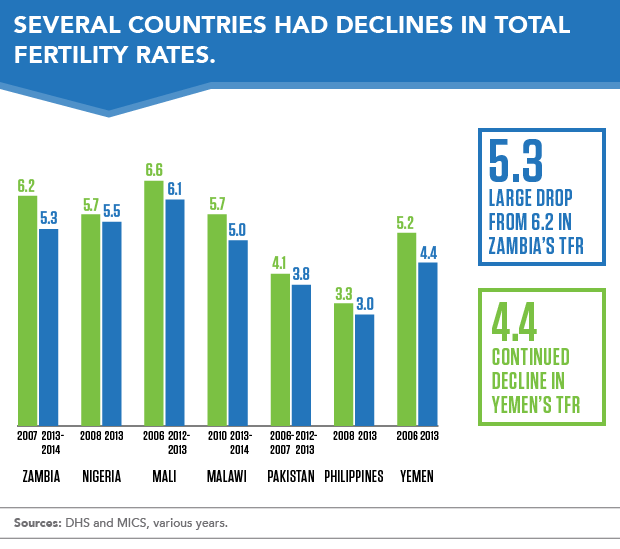 The 2012-2013 DHS of Mali recorded a TFR of 6.1, a decrease from 6.6 recorded in the 2006 DHS. And the 2013 DHS found an increase in modern contraception from 6 percent to 9 percent of currently married women. But the decline in the TFR may be larger, given that three northern regions could not be surveyed due to regional conflicts, and these regions had lower TFRs than the national average when they were last surveyed in 2006.

Another significant decline has been in Malawi, where the 2013-2014 MICS reported a TFR of 5.0, quite a decline from the 5.7 reported by the 2010 DHS. Modern contraceptive prevalence rose to 57 percent from 42 percent, raising the possibility that Malawi’s fertility has begun a rapid decline.

Additional declines in fertility have been reported in Pakistan, the Philippines, and Yemen. In Pakistan, the TFR decreased to 3.8 in the 2012-2013 DHS from 4.1 in the 2006-2007 DHS. The use of family planning rose from 30 percent using all methods and 22 percent using modern methods, to 35 percent and 25 percent, respectively, in the most recent survey. One unusual finding in the recent survey is that the withdrawal method of contraception more than doubled, to 9 percent, from 2007 to 2013. This result suggests that there a pent-up need for contraception.

In Yemen, the decline in fertility continues. In the 2013 DHS, the TFR was 4.4, down from 5.2 in the 2006 MICS. The 2013 DHS noted that fertility fell by 2 children in just 16 years. The use of contraception rose from 28 percent for all methods and 19 percent for modern methods to 34 percent and 25 percent, respectively.

The DHS and MICS surveys continue to fills large gaps in our knowledge of what is happening in those developing countries where systems for annual registration of births are simply not available.