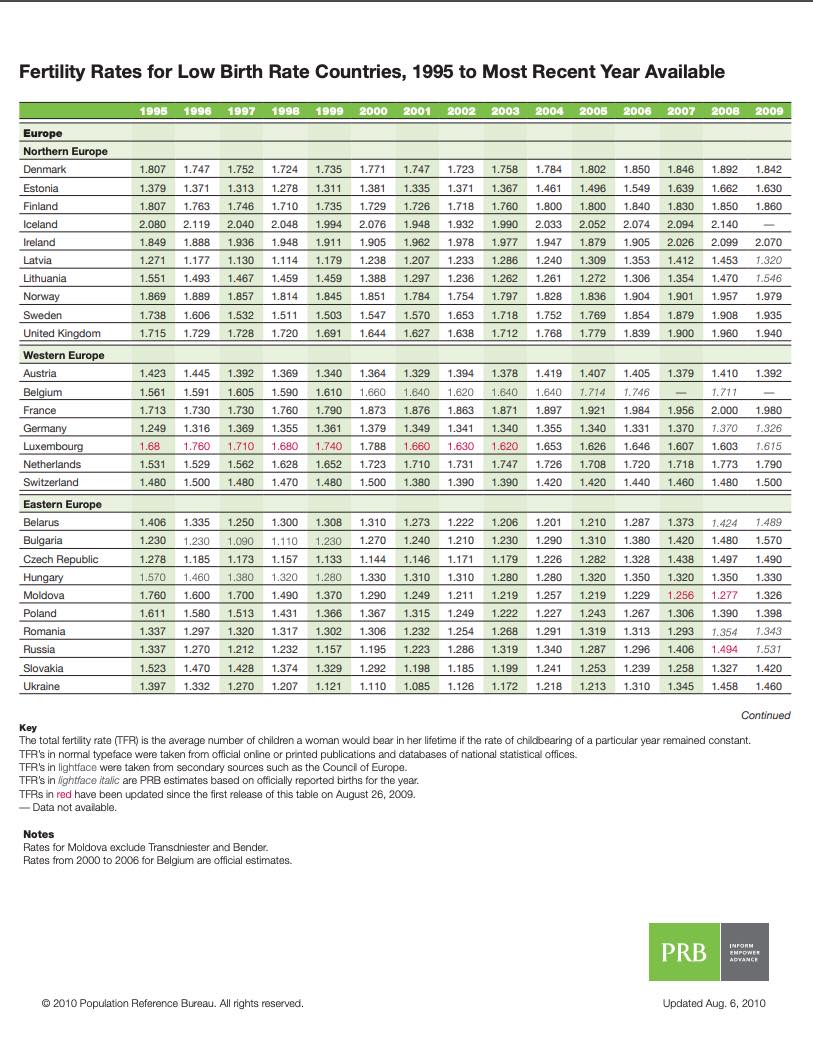 With the release of the 2010 World Population Data Sheet, PRB continues its tracking of birth rates in low fertility countries, begun in 2007.

PRB has updated its table on trends in the total fertility rate (TFR) in countries that have experienced unusually low birth rates for years.1 The countries in the table are primarily developed countries and have complete birth and death registrations, allowing one to follow year-to-year changes. The revised table now includes either official figures or close estimates for 2009.

In the TFR table published in 2009, there were 10 developed countries with low or very low fertility whose populations were considered “rising.” In order to apply objective criteria to what is often a variable pattern of birth rate change, a low-fertility “riser” was defined as a country whose TFR had declined to 1.6 children per woman or less and had increased by at least 0.3 since its low point, whatever year that might have been.2 The rest, 25 countries in all, were classified as “not rising.” The 10 countries where fertility was on the rise in 2008 dropped to only two in 2009.

Was this caused by the worldwide recession? While changes in birth rates can have many causes, for the purposes of this article, we will assume that negative economic factors did play a significant role. This year’s classification in the listing below breaks down the 10 countries listed as birth rate risers last year into two categories: those that continued to rise and those that either rose more slowly or saw their TFR decline from 2008. Of the countries with little or no previous pattern of increase, the TFR declined from 2008 to 2009 in Canada, Singapore, South Korea, and Taiwan.

The effect of low birth rates poses three challenges for governments: a greatly increased proportion of elderly and retirees, too few workers to pay taxes to support them, and declining home consumer market leading to declining corporate taxes. Although a smaller population is often looked on as a positive development, the skewed age structure—the imbalance between workers and retirees—also creates economic challenges.

Governments are concerned about the situation but measures to encourage childbearing have come late and have had little effect. Russia, one of the few countries to have had some success in encouraging childbearing, is using monetary incentives. Beginning in 2007, couples received about US$9,000, a large sum, for a second, third, or higher order birth.3 In 2006, the TFR had been 1.296 (up from 1.157 in 1999) and rose to 1.406 in 2007, and to 1.494 in 2008. In 2009, it rose to an estimated 1.53, an increase that could be related to the recession. However, births were only about 2 percent higher in January to June 2010 than the same period in 2009. In Russia, as in other low-fertility countries, even when fertility shows signs of some increase, it remains very low.

Many other governments are considering or beginning to implement plans to raise the birth rate, such as improved maternity and paternity leave, direct payments, improved availability of day care, and even contests. The government of Taiwan, the country with the world’s lowest TFR at 1.0, announced a contest for the best creative slogan that would motivate couples to procreate, with a prize of about US$32,000.4 However, 2010 is a Year of the Tiger, an inauspicious year for childbearing in the Chinese zodiac. In the first six months of 2010, the number of births was down quite a bit from 2009. In 2010, Taiwan could record an unprecedented TFR below 1.0. In Spain, every birth from 2007 has earned a payment of about US$3,300.5 Spain’s TFR did rise briefly but then declined during 2009. The government will suspend the child payment plan in 2011 as part of general budget austerity measures.6 Finding room in the budget for expensive family support programs has been problematic in many countries.

Carl Haub is a senior demographer and Conrad Taeuber Chair of Public Information at the Population Reference Bureau.