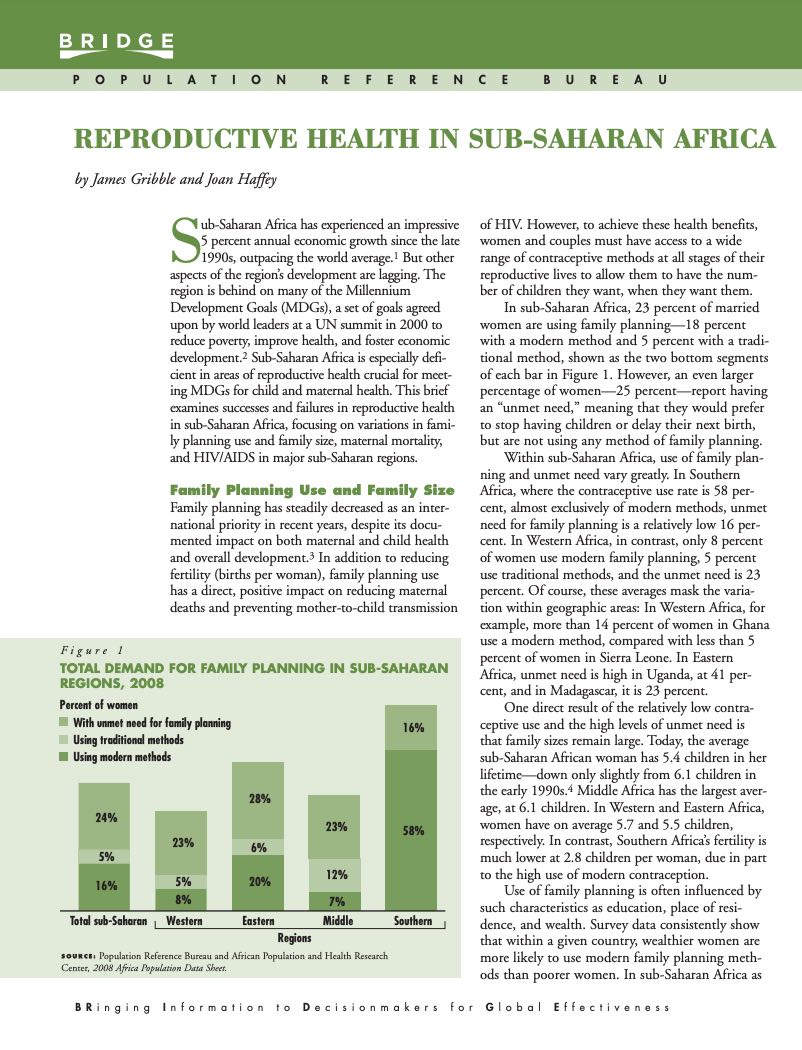 Other Languages and Materials

(October 2008) Sub-Saharan Africa has experienced an impressive 5 percent annual economic growth since the late 1990s, outpacing the world average.1 But other aspects of the region’s development are lagging. The region is behind on many of the Millennium Development Goals (MDGs), a set of goals agreed upon by world leaders at a UN summit in 2000 to reduce poverty, improve health, and foster economic development.2 Sub-Saharan Africa is especially deficient in areas of reproductive health crucial for meeting MDGs for child and maternal health. Improving access to family planning, reducing maternal deaths, and preventing HIV infections are important for achieving better reproductive health.

Family Planning Use and Family Size

Family planning has steadily decreased as an international priority in recent years, despite its documented impact on both maternal and child health and overall development.3 In addition to reducing fertility (births per woman), family planning use has a direct, positive impact on reducing maternal deaths and preventing mother-to-child transmission of HIV. However, to achieve these health benefits, women and couples must have access to a wide range of contraceptive methods at all stages of their reproductive lives to allow them to have the number of children they want, when they want them.

In sub-Saharan Africa, 23 percent of married women are using family planning—18 percent with a modern method and 5 percent with a traditional method. However, an even larger percentage of women—25 percent—report having an “unmet need,” meaning that they would prefer to stop having children or delay their next birth, but are not using any method of family planning.  Meeting this unmet need is an important step toward improving reproductive health in sub-Saharan Africa. But other factors affecting women’s health also need to be addressed, including the availability of skilled care during childbirth and extreme poverty.

As 2015 approaches—the target date for achieving the MDGs—much work remains to be done in all areas of reproductive health, especially in increasing family planning, reducing maternal mortality and slowing the spread of HIV/AIDS. Many countries are making advances in reaching the targets; yet throughout sub-Saharan Africa, there are still great needs and opportunities to do more.

James Gribble is director of the BRIDGE Project at the Population Reference Bureau. Joan Haffey is a PRB consultant.