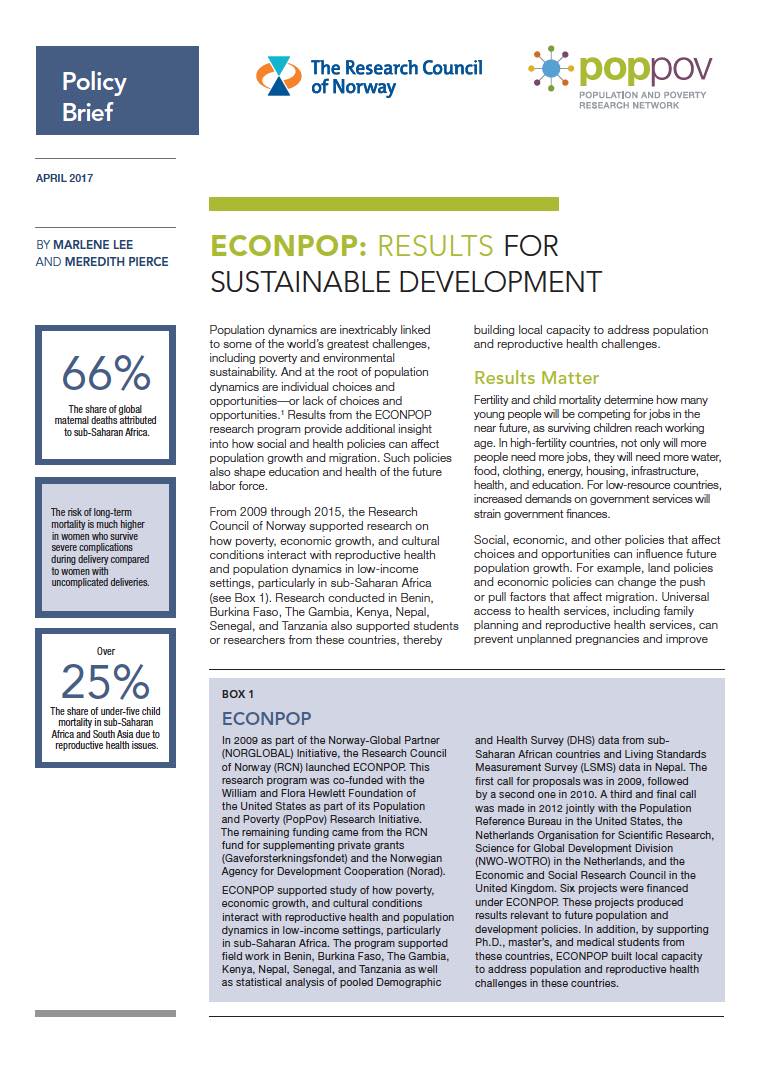 The Research Council of Norway, a funding partner in the Population and Poverty Research Network (PopPov) for which PRB is the Secretariat, recently hosted a knowledge-sharing event at the Norwegian Agency for Development Cooperation (Norad) in Oslo, Norway. To accommodate policymakers’ busy schedules, the Research Council challenged each presenter to discuss their research results, policy implications, and recommendations in six minutes or less.

The Research Council staff knew that researchers pay great attention to detail and to research nuances that could not be included in the short presentations, but they wanted to encourage policymakers to attend the presentations and to ask questions. At the conference, “A Gender Perspective on Demography and Conflict,” researchers explained the complexity of local circumstances in which women act strategically to access reproductive health care, to generate income, to care for their children, and to access legal rights. There was also a session on women and gender equality focusing on woman and conflict.

The researchers accepted the “speed presentation” challenge with varying degrees of enthusiasm. In the end, their commitment was clear: They all presented complex research studies and implications in less than seven minutes. PRB coordinated coaching and a rehearsal in the days leading up to the conference, helping research teams focus their messages and streamline their PowerPoint slides. PRB staff also wrote a brief summarizing results from ECONPOP (Economic Growth, Poverty Reduction, Reproductive Health, and Population Dynamics), a research program that has contributed to understanding interactions among poverty, cultural conditions, and reproductive health in sub-Saharan regions of Africa and in Nepal.

Communication with stakeholders is a common mandate of the Research Council of Norway and PRB. The two organizations also have a mutual interest in results presented by researchers from ECONPOP.

The ECONPOP projects contributed new knowledge relevant to achieving universal primary education (MDG 2); promoting gender equality and women’s economic empowerment (MDG 3); reducing child mortality (MDG 4); and improving reproductive and maternal health (MDG 5). The program targets all these goals in order to address the multiple dimensions of income and poverty in low-income countries. Laila Bokhari, Norway’s State Secretary at the Ministry of Foreign Affairs, who opened the conference, emphasized her country’s role as a leader in women’s reproductive rights and empowerment and their continued commitment to research.

ECONPOP is the result of a collaboration between the Research Council of Norway, Norad, and The William and Flora Hewlett Foundation. ECONPOP is also part of a larger initiative that has been supported by the Hewlett Foundation from 2005 to 2015: The Population and Poverty (PopPov) Research Initiative.