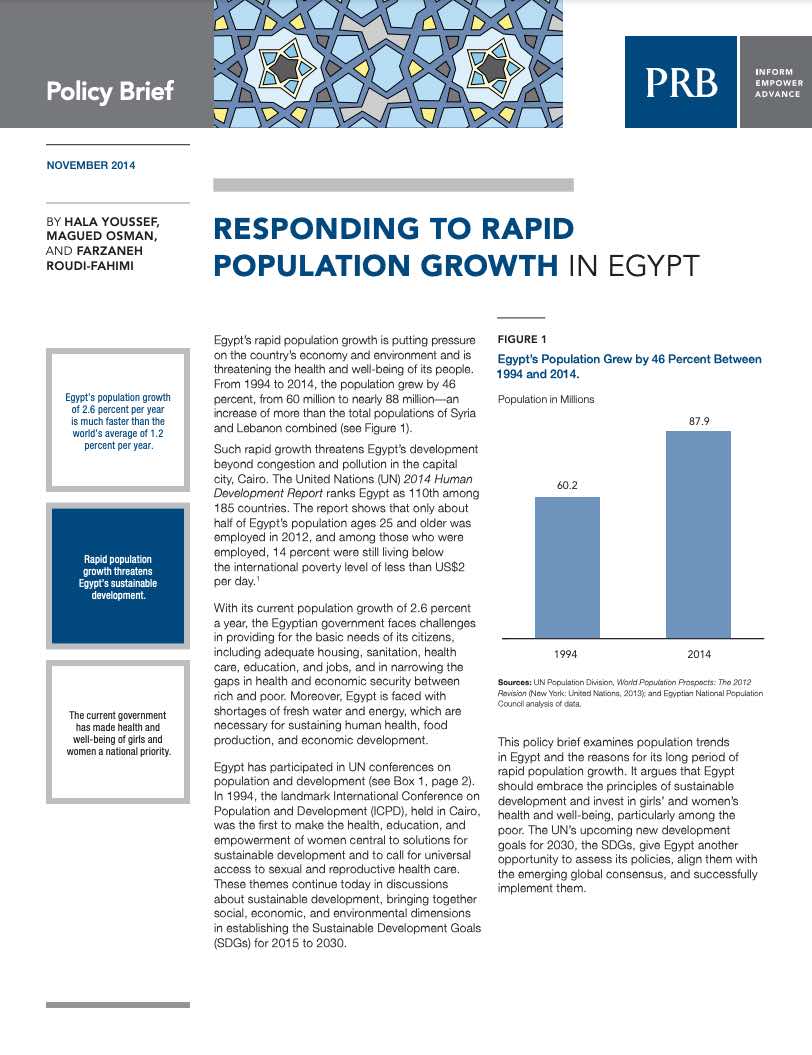 (November 2014) Egypt’s rapid population growth is putting pressure on the country’s economy and environment and is threatening the health and well-being of its people.
From 1994 to 2014, the population grew by 46 percent, from 60 million to nearly 88 million—an increase of more than the total populations of Syria and Lebanon combined.

Such rapid growth threatens Egypt’s development beyond congestion and pollution in the capital city, Cairo. The United Nations (UN) 2014 Human Development Report ranks Egypt as 110th among 185 countries. The report shows that only about half of Egypt’s population ages 25 and older was employed in 2012, and among those who were employed, 14 percent were still living below the international poverty level of less than US$2 per day.

With its current population growth of 2.6 percent a year, the Egyptian government faces challenges in providing for the basic needs of its citizens,
including adequate housing, sanitation, health care, education, and jobs, and in narrowing the gaps in health and economic security between rich and poor. Moreover, Egypt is faced with shortages of fresh water and energy, which are necessary for sustaining human health, food production, and economic development.

Egypt has participated in UN conferences on population and development. In 1994, the landmark International Conference on Population and Development (ICPD), held in Cairo, was the first to make the health, education, and empowerment of women central to solutions for sustainable development and to call for universal access to sexual and reproductive health care. These themes continue today in discussions about sustainable development, bringing together social, economic, and environmental dimensions in establishing the Sustainable Development Goals (SDGs) for 2015 to 2030.

This policy brief examines population trends in Egypt and the reasons for its long period of rapid population growth. It argues that Egypt should embrace the principles of sustainable development and invest in girls’ and women’s health and well-being, particularly among the poor. The UN’s upcoming new development goals for 2030, the SDGs, give Egypt another opportunity to assess its policies, align them with the emerging global consensus, and successfully implement them.

Hala Youssef is secretary general of the Egyptian National Population Council. Magued Osman is managing director of the Egyptian Center for Public Opinion Research, Baseera. Farzaneh Roudi-Fahimi is program director for the Middle East and North Africa at PRB. This work is funded by the Ford Foundation Office in Cairo.