Single Working Mothers in U.S. Worse Off Since the Recession 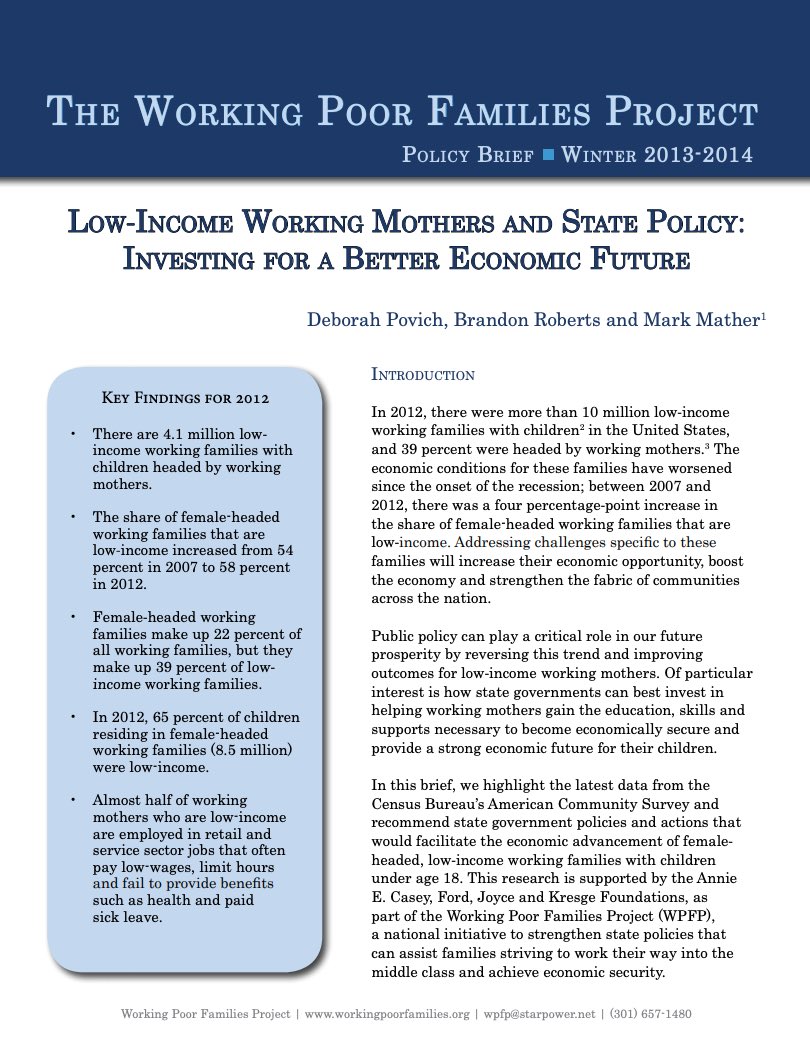 U.S. working mothers have had a hard time in recent years: Between 2007 and 2012, the share of female-headed working families that are low-income increased from 54 percent to 58 percent, according to a Population Reference Bureau (PRB) analysis of data from the U.S. Census Bureau’s American Community Survey.

Out of almost 11 million low-income working families in 2012, more than 4 million were headed by working mothers, reports State Policy and Low-Income Working Mothers: Investing for a Better Economic Future, issued by the Working Poor Families Project, with support from the Annie E. Casey, Ford, Joyce, and Kresge foundations (see figure).

“The majority of female-headed households with children work for pay, but they are disproportionately burdened by poverty, compared with two-parent families,” said Mark Mather, a report co-author and PRB associate vice president of U.S. Programs. “Female-headed households make up 22 percent of all working families, but they represent 39 percent of low-income working families.”

Most of these working mothers were concentrated in low-wage jobs in the service and retail sectors (such as health aide, cashier, or maid) that tend to lack benefits such as health insurance or paid sick leave.

Home health aide was the most common occupation (7 percent) among this group. As a result of federal policy changes, these workers will be covered by minimum wage and overtime rules for the first time beginning in 2015. Hourly wages averaged about $10 in 2012, or about $21,000 per year.

“More needs to be done to ensure these jobs offer benefits and family-supporting wages,” says Mather.

The Affordable Care Act will give more low-income working mothers access to private health insurance or Medicaid benefits, but nearly half of these families reside in states that have declined to expand their Medicaid programs, the report found.

Other results from the report: