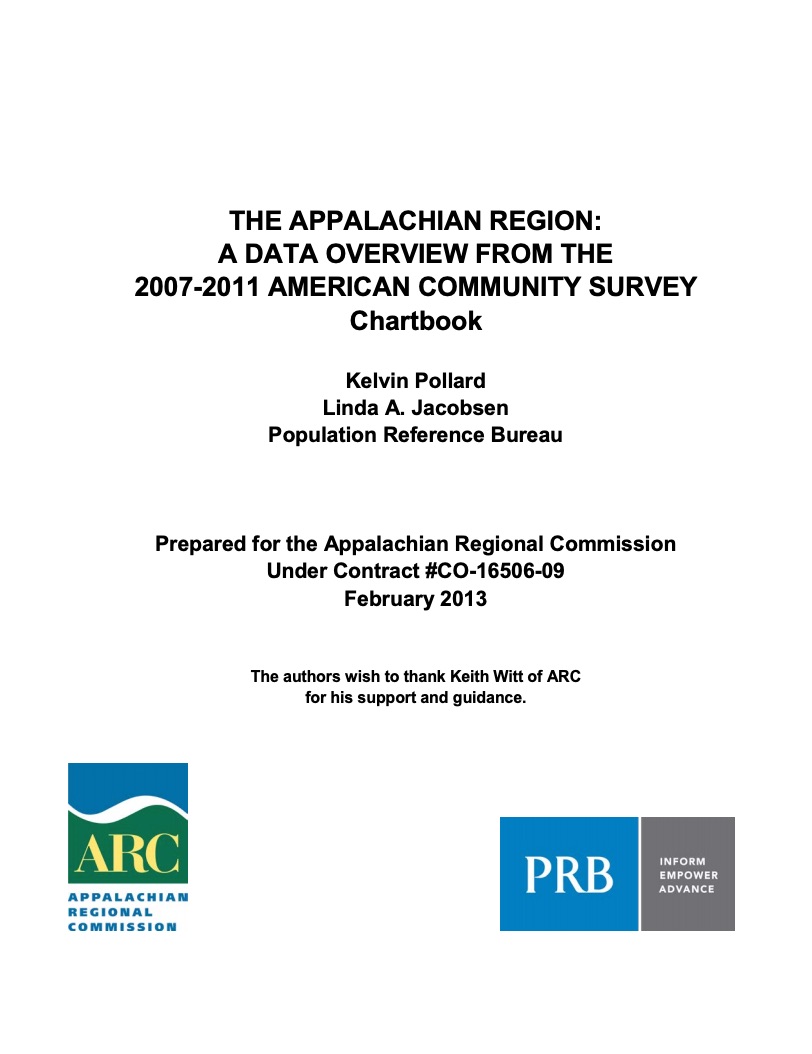 Chartbook. The Appalachian Region: A Data Overview from the 2007-2011 American Community Survey

Appalachia’s residents remain older, less educated, and less racially diverse than the United States as a whole, but those demographic and socioeconomic patterns vary widely within the region, according to The Appalachian Region: A Data Overview From the 2007-2011 American Community Survey, prepared by the Population Reference Bureau for the Appalachian Regional Commission.

The Appalachian region encompasses 205,000 square miles along the spine of the Appalachian Mountains from southern New York to northern Mississippi, including portions of 12 states and all of West Virginia. This report—co-authored by Kelvin Pollard, PRB senior demographer, and Linda A. Jacobsen, PRB vice president of Domestic Programs—finds that this region’s population has continued to grow: The latest population estimates indicate the region had 25.3 million residents in 2011 (out of 312 million Americans nationwide), compared to 25.2 million in the 2010 Census.

During the 2007-2011 period (a period of both economic growth and decline), nearly 74 percent of Appalachia’s civilians in the prime working ages (ages 25 to 64) were in the civilian labor force, slightly below the U.S. average of 78 percent. In 36 Appalachian counties (scattered throughout the region), the share was at or above the national average; two-thirds of those counties were in metropolitan areas.

The report also identifies 51 counties where less than 60 percent of 25-to-64-year-olds were in the civilian labor force. Nearly all of these counties were outside of metropolitan areas, and 40 were in central Appalachia. Indeed, just 60 percent of working-age residents in central Appalachia and 65 percent of those in rural areas were in the labor force. The authors suggest a possible connection between educational attainment and labor force participation. For example, in most of the counties with labor force participation rates matching or exceeding that of the nation, the share of working-age adults with at least a high school diploma was also at or above the U.S. average.