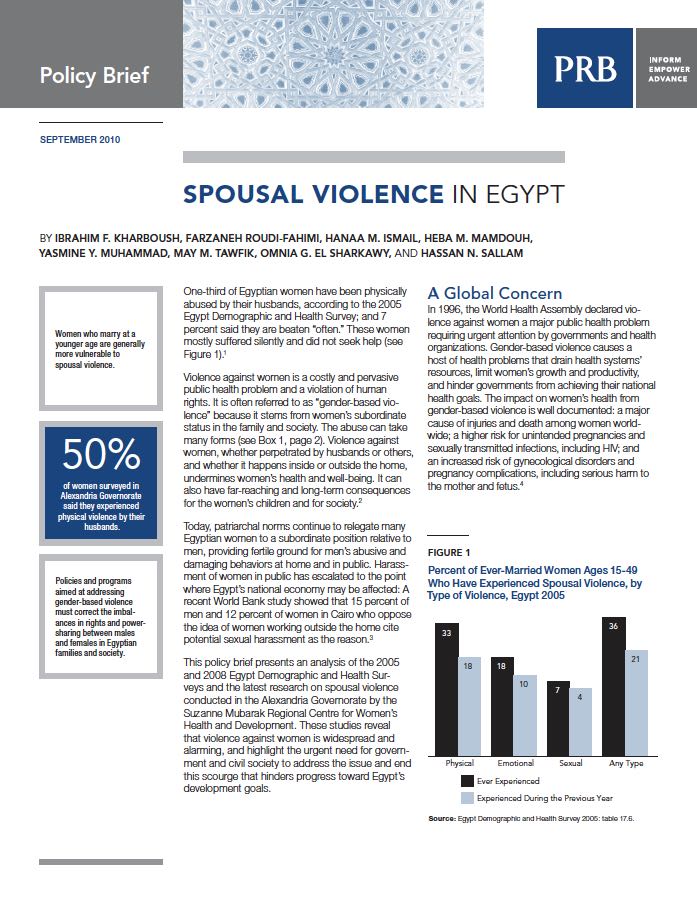 (September 2010) One-third of Egyptian women have been physically abused by their husbands, according to the 2005 Egypt Demographic and Health Survey; and 7 percent said they are beaten “often.” These women mostly suffered silently and did not seek help.1

Violence against women is a costly and pervasive public health problem and a violation of human rights. It is often referred to as “gender-based violence” because it stems from women’s subordinate status in the family and society. The abuse can take many forms. Violence against women, whether perpetrated by husbands or others, and whether it happens inside or outside the home, undermines women’s health and well-being. It can also have far-reaching and long-term consequences for the women’s children and for society.2

Today, patriarchal norms continue to relegate many Egyptian women to a subordinate position relative to men, providing fertile ground for men’s abusive and damaging behaviors at home and in public. Harassment of women in public has escalated to the point where Egypt’s national economy may be affected: A recent World Bank study showed that 15 percent of men and 12 percent of women in Cairo who oppose the idea of women working outside the home cite potential sexual harassment as the reason.3

This policy brief presents an analysis of the 2005 and 2008 Egypt Demographic and Health Surveys and the latest research on spousal violence conducted in the Alexandria Governorate by the Suzanne Mubarak Regional Centre for Women’s Health and Development. These studies reveal that violence against women is widespread and alarming, and highlight the urgent need for government and civil society to address the issue and end this scourge that hinders progress toward Egypt’s development goals.

This brief was prepared by Farzaneh Roudi-Fahimi, program director of the Middle East and North Africa Program at PRB, in collaboration with the Research Department of the Suzanne Mubarak Regional Centre for Women’s Health and Development (SMC) in Alexandria, Egypt. The research team at the Suzanne Mubarak Center that contributed to this report included Ibrahim F. Kharboush, Heba M. Mamdouh, and Yasmine Y. Muhammad, consultants at SMC and, respectively, professor, lecturer, and instructor of maternal and child health at the High Institute of Public Health, University of Alexandria; Hanaa M. Ismail, director of the research department at SMC and professor at the High Institute of Public Health, University of Alexandria; Omnia G. El Sharkawy and May M. Tawfik, research specialists at SMC; and Hassan N. Sallam, director of SMC and professor of obstetrics and gynecology at the University of Alexandria.