Suicide Replaces Homicide as Second-Leading Cause of Death Among U.S. Teenagers

Despite the rise in suicide, the overall mortality rate among teenagers has fallen from 68.6 deaths per 100,000 in 1999 to 45.5 deaths per 100,000 in 2014, as a result of declining homicide and traffic accident death rates during the past 15 years. Data are based on Population Reference Bureau (PRB)’s analysis of mortality statistics from the U.S. Centers for Disease Control and Prevention (CDC). 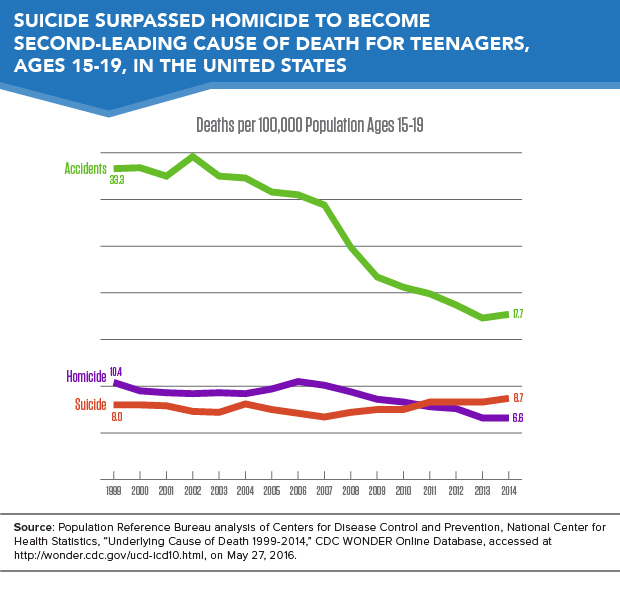 A higher rate of suicide attempts does not appear to be driving the increasing teenage suicide rate. Data from the Youth Risk Behavior Surveillance System show that among high school students, the prevalence of attempting suicide remained flat from 1999 to 2013.1 Rather, suicide attempts today appear more likely to result in death because teenagers have shifted to more lethal methods of self-harm—a trend that has alarming implications.2

The frequency of suffocation (a particularly lethal form of self-harm, which includes hanging) as the reported cause of suicide-related death among teenagers nearly doubled over the past 15 years. The share of teenage suicides due to suffocation rose from more than one-quarter (27 percent) in 1999 to nearly one-half (45 percent) in 2014. 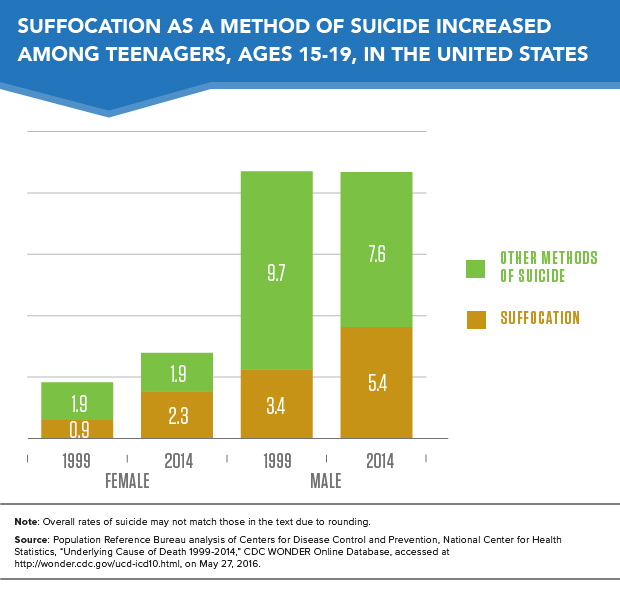 Among teenage boys, the suicide rate by suffocation increased by almost 60 percent across this period, but their overall suicide rate remained stable at 13 deaths per 100,000 due to a drop in the rate of suicide by other methods including firearms.

Increasing use of highly lethal methods of self-harm presents a significant public health challenge. The reasons teenagers are using more lethal methods to attempt suicide remain unclear. Some researchers hypothesize that social contagion—more exposure to suicide could induce at-risk individuals to attempt suicide—may be to blame, but there are no definitive answers. More research is needed to understand the underlying factors behind this trend. In the meantime, suicide prevention programs should continue working to address root causes, while also recognizing that the risk of death from a suicide attempt is rising.

Suicide rates rose for girls in every racial/ethnic category between 1999-2001 and 2012-2014.3 Rates rose fastest for American Indian and Alaska Native girls (60 percent increase), and rates rose by more than 50 percent for both non-Hispanic Black/African American and non-Hispanic white teenage girls.

Among boys, only non-Hispanic Black/African American teenagers had lower suicide rates in 2012-2014 than in 1999-2001. As with girls, rates rose fastest for American Indian and Alaska Native teenage boys, and rates also increased for non-Hispanic white boys. Rates remained stable for Asian/Pacific Islander and Hispanic teenage boys.

Overall, the highest teenage suicide rates are among American Indian and Alaska Native teenagers. This may be partially explained by their greater concentrations in rural areas, where the risk of suicide is much greater (see map). Yet, even in rural areas, American Indian and Alaska Native teenagers have extraordinarily high rates of suicide, especially as compared with other racial/ethnic groups living in those areas.

Suicide rates are higher in rural areas for a variety of reasons including social isolation, prevalence of firearms, economic hardship, and limited access to mental health and emergency health care services.

The recent decline in the overall teenage death rate shows that the United States is making progress in keeping children safe from harm. Yet the rise in suicide rates represents a significant and growing public health threat, and requires action. Suicide prevention strategies include depression/suicide awareness programs, expanded access to mental health services, and programs that support vulnerable populations (such as Native American teenagers, teenagers struggling with gender and sexual identity, and those with mental health or substance abuse problems).

These troubling trends should serve as a reminder to health practitioners, hotline workers, and the public that teenage suicide risk should be taken seriously. Expanding mental health and other social and strengthening social connections with at-risk teenagers can help prevent these deaths.5