The 2010 Census Questionnaire: Seven Questions for Everyone

The 2010 Census questionnaire will be sent to every housing unit in the country. The person in who fills out the form (Person 1) will provide the household information, including whether the home is rented or owned, and will answer just seven questions about every household member, including himself or herself:

Each question—how it is worded, how many and which categories are included—is carefully considered and pretested. The information is either required by law to provide constitutionally mandated information for apportioning congressional seats, or for drawing new legislative district boundaries, distributing federal funds, administering federal programs, or it is collected to help ensure the accuracy and completeness of the census. Although the name of each household member is also collected, it remains confidential for 72 years.

Three of the above questions included in the 2010 Census are highlighted below.

Relationships Within the Household

Everyone living in a household is listed according to his or her relation to “Person 1,” in one of 14 categories, including husband or wife, stepson or stepdaughter, roomer or boarder, or unmarried partner. These responses tell us, for example, how many people live alone or with nonrelatives; how many children live with one parent or grandparent; and how many households include extended family members such as in-laws or adult siblings. Together these responses provide a snapshot of the American family. The information about relationships within U.S. households is used for federally funded nutrition and education programs, housing funding, and other social services.

Since the 1970 Census, the questionnaire has asked U.S. residents whether they are of Hispanic origin, and if so, which broad Hispanic group they identify with. Hispanic origin is considered separately from race in the Census—and Hispanics may identify with any race. As the largest and fastest-growing ethnic minority in the United States, the information about Hispanic origin is of growing importance. It is used in numerous programs and for monitoring equal employment opportunities.

The 2010 questionnaire lists 15 racial categories, as well as places to write in  specific races not listed on the form. The 2010 Census continues the option first introduced in the 2000 Census for respondents to choose more than one race. Only about 2 percent of Americans identified with more than one race in the 2000 Census, but the percentage was much higher for children and young adults and will likely increase in 2010. 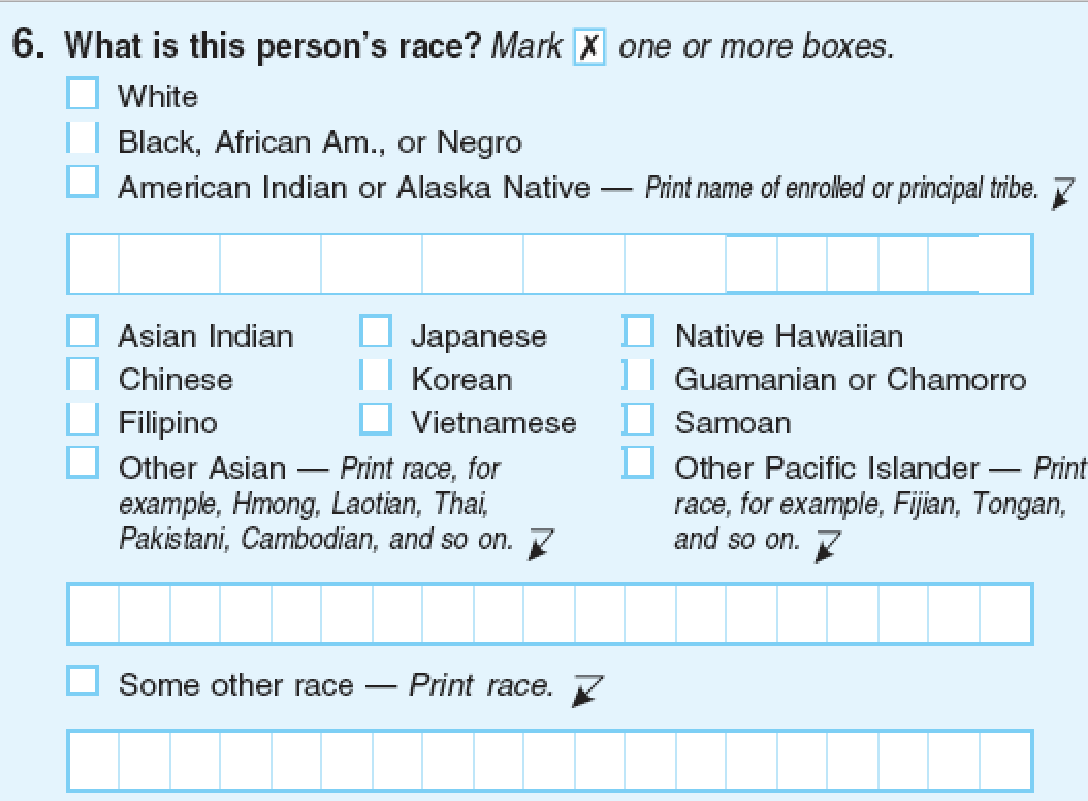