The Challenge of Attaining the Demographic Dividend 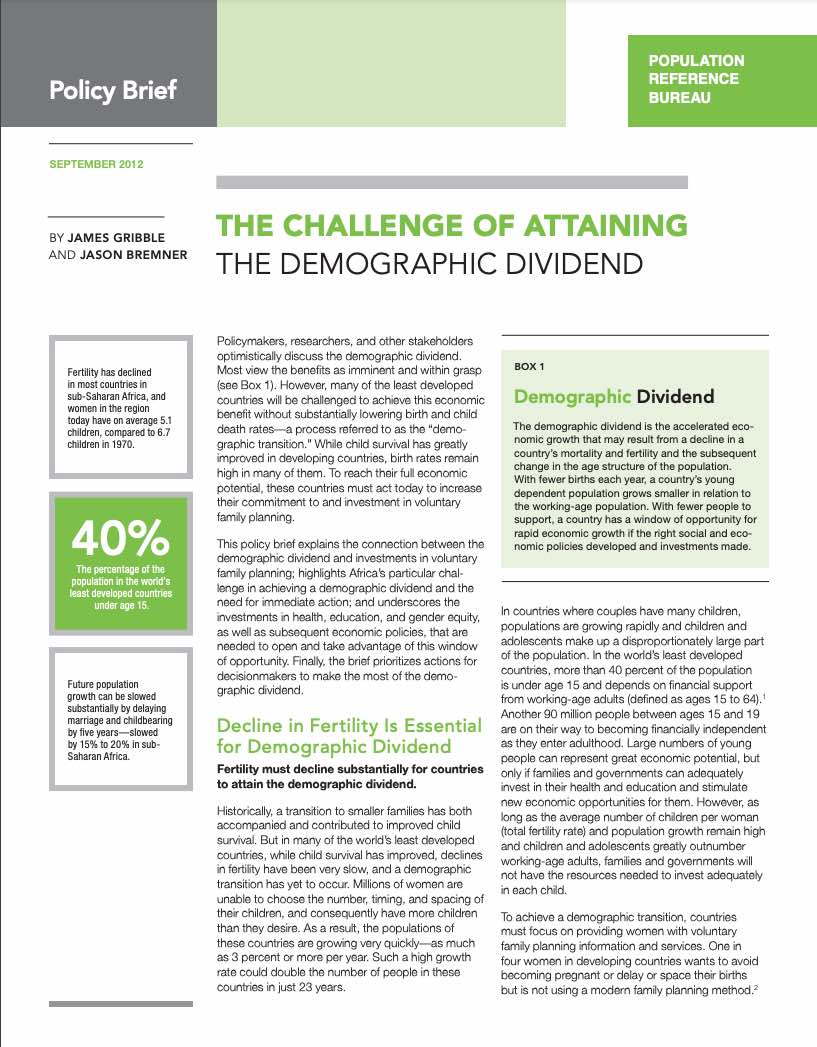 Policy Brief. The Challenge of Attaining the Demographic Dividend

Policymakers, researchers, and other stakeholders optimistically discuss the demographic dividend. Most view the benefits as imminent and within grasp. However, many of the least developed countries will be challenged to achieve this economic benefit without substantially lowering birth and child death rates—a process referred to as the “demographic transition.” While child survival has greatly improved in developing countries, birth rates remain high in many of them. To reach their full economic potential, these countries must act today to increase their commitment to and investment in voluntary family planning.

Decline in Fertility Is Essential for Demographic Dividend

Fertility must decline substantially for countries to attain the demographic dividend.

Historically, a transition to smaller families has both accompanied and contributed to improved child survival. But in many of the world’s least developed countries, while child survival has improved, declines in fertility have been very slow, and a demographic transition has yet to occur. Millions of women are unable to choose the number, timing, and spacing of their children, and consequently have more children than they desire. As a result, the populations of these countries are growing very quickly—as much as 3 percent or more per year. Such a high growth rate could double the number of people in these countries in just 23 years.

In countries where couples have many children, populations are growing rapidly and children and adolescents make up a disproportionately large part of the population. In the world’s least developed countries, more than 40 percent of the population is under age 15 and depends on financial support from working-age adults (defined as ages 15 to 64).1 Another 90 million people between ages 15 and 19 are on their way to becoming financially independent as they enter adulthood. Large numbers of young people can represent great economic potential, but only if families and governments can adequately invest in their health and education and stimulate new economic opportunities for them. However, as long as the average number of children per woman (total fertility rate) and population growth remain high and children and adolescents greatly outnumber working-age adults, families and governments will not have the resources needed to invest adequately in each child.

To achieve a demographic transition, countries must focus on providing women with voluntary family planning information and services. One in four women in developing countries wants to avoid becoming pregnant or delay or space their births but is not using a modern family planning method.2 These women account for almost 80 percent of unintended pregnancies.3 When women can choose when and how often to become pregnant, they are more likely to have fewer children and are better able to achieve their desired family size.

In addition, by delaying the age at first birth, population growth could also slow substantially. In countries with the highest fertility rates and lowest average age at marriage (mainly in sub-Saharan Africa and South Asia), future population growth can be slowed substantially by delaying marriage and childbearing by five years—slowed by 15 percent to 20 percent in sub-Saharan Africa.4

Although several countries with high fertility and low development indicators—many in sub-Saharan Africa—also exhibit relatively high levels of economic growth, the growth has not improved the living standards of most people. As a result of great inequality in many of these countries, economic gains have benefited only a small number of people while most continue to live in poverty with limited access to education and poor health. Consequently, fertility remains high, populations continue to grow, and the demographic transition is slowed. Only in the past decade have countries with high fertility and low development indicators begun to show any declines in fertility. Until these countries have more substantial reductions in fertility and complete a demographic transition, the opportunity for a demographic dividend will be delayed for decades.