The Health and Well-Being of Grandparents Caring for Grandchildren 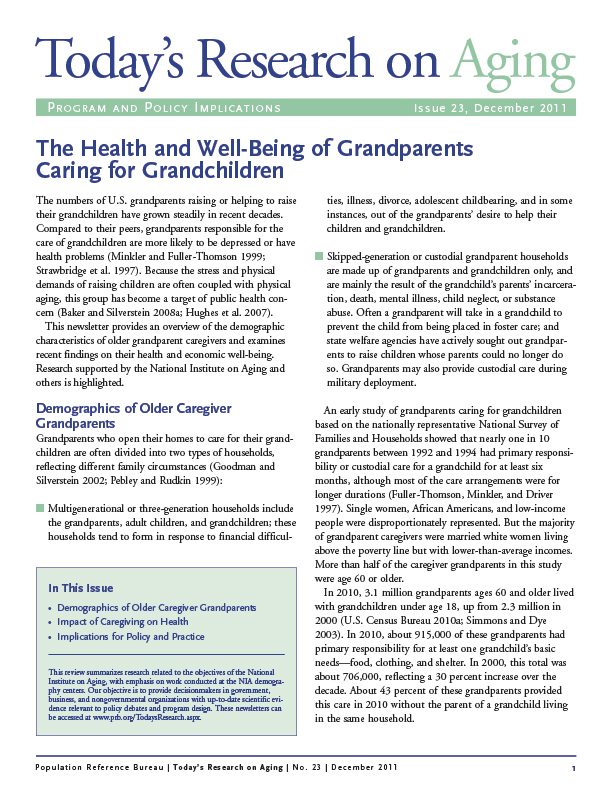 Today’s Research on Aging, Issue 23. The Health and Well-Being of Grandparents Caring for Grandchildren

The numbers of U.S. grandparents responsible for raising a grandchild increased 30 percent between 2000 and 2010. Compared to their peers, grandparents caring for grandchildren are more likely to be depressed or have health problems. Because the stress and physical demands of raising children are often coupled with physical aging, this group has become a target of public health concern.

This newsletter provides an overview of the demographic characteristics of older grandparent caregivers and examines recent research supported by the National Institute on Aging and others on their health and well-being.

In 2010, 3.1 million grandparents ages 60 and older lived with grandchildren under age 18, up from 2.3 million in 2000. In 2010, about 915,000 of these grandparents had primary responsibility for at least one grandchild’s basic needs—food, clothing, and shelter. In 2000, this total was about 706,000, reflecting a 30 percent increase over the decade. About 43 percent of these grandparents provided this care in 2010 without the parent of a grandchild living in the same household.

Caregiver grandparents are more likely to have low income and education levels and to be members of minority groups, characteristics linked to poorer health and depression apart from caregiving. Grandparents in poorer health before they begin caregiving are predisposed to further decline. When previous health and other characteristics are taken into account, researchers find no evidence that caring for grandchildren has widespread negative effects on grandparents’ health; but they do find some evidence that grandmothers raising grandchildren alone experience declines in health. Public policy has not kept pace with the proliferation of multigenerational and grandparent-headed families. A variety of services and policies—such as respite care, support groups, economic assistance, and employer policies—can provide missing resources and reduce the caregiving burden on grandparents, contributing to better health.