The Need for Reproductive Health Education in Schools in Egypt 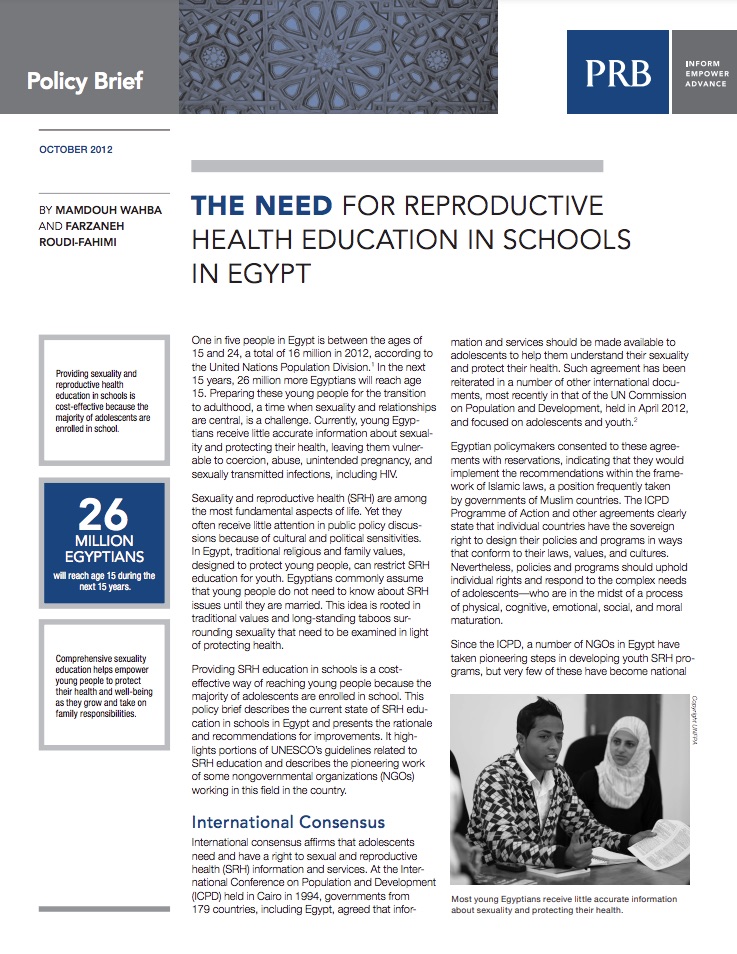 Policy Brief: The Need for Reproductive Health Education in Schools in Egypt

(October 2012) One in five people in Egypt is between the ages of 15 and 24, a total of 16 million in 2012, according to the United Nations Population Division. In the next 15 years, 26 million more Egyptians will reach age 15. Preparing these young people for the transition to adulthood, a time when sexuality and relationships are central, is a challenge. Currently, young Egyptians receive little accurate information about sexuality and protecting their health, leaving them vulnerable to coercion, abuse, unintended pregnancy, and sexually transmitted infections, including HIV.

Sexuality and reproductive health (SRH) are among the most fundamental aspects of life. Yet they often receive little attention in public policy discussions because of cultural and political sensitivities. In Egypt, traditional religious and family values, designed to protect young people, can restrict SRH education for youth. Egyptians commonly assume that young people do not need to know about SRH issues until they are married. This idea is rooted in traditional values and long-standing taboos surrounding sexuality that need to be examined in light of protecting health.

Providing SRH education in schools is a cost-effective way of reaching young people because the majority of adolescents are enrolled in school. This policy brief describes the current state of SRH education in schools in Egypt and presents the rationale and recommendations for improvements. It highlights portions of UNESCO’s guidelines related to SRH education and describes the pioneering work of some nongovernmental organizations (NGOs) working in this field in the country.

International consensus affirms that adolescents need and have a right to sexual and reproductive health information and services. At the International Conference on Population and Development (ICPD) held in Cairo in 1994, governments from 179 countries, including Egypt, agreed that information and services should be made available to adolescents to help them understand their sexuality and protect their health. Such agreement has been reiterated in a number of other international documents, most recently in that of the UN Commission on Population and Development, held in April 2012, and focused on adolescents and youth.

Egyptian policymakers consented to these agreements with reservations, indicating that they would implement the recommendations within the framework of Islamic laws, a position frequently taken by governments of Muslim countries. The ICPD Programme of Action and other agreements clearly state that individual countries have the sovereign right to design their policies and programs in ways that conform to their laws, values, and cultures. Nevertheless, policies and programs should uphold individual rights and respond to the complex needs of adolescents—who are in the midst of a process of physical, cognitive, emotional, social, and moral maturation.

Since the ICPD, a number of NGOs in Egypt have taken pioneering steps in developing youth SRH programs, but very few of these have become national programs. The new Egyptian government has the opportunity to develop SRH education for schools based on evidence of successful programs, building on local experiences and learning from other Muslim countries.

This brief was written by Mamdouh Wahba, Secretary General of the Egyptian Family Health Society; and Farzaneh Roudi-Fahimi, director of the Middle East and North Africa Program at the Population Reference Bureau.