The Role of Policymakers in Ending Female Genital Mutilation: An African Perspective 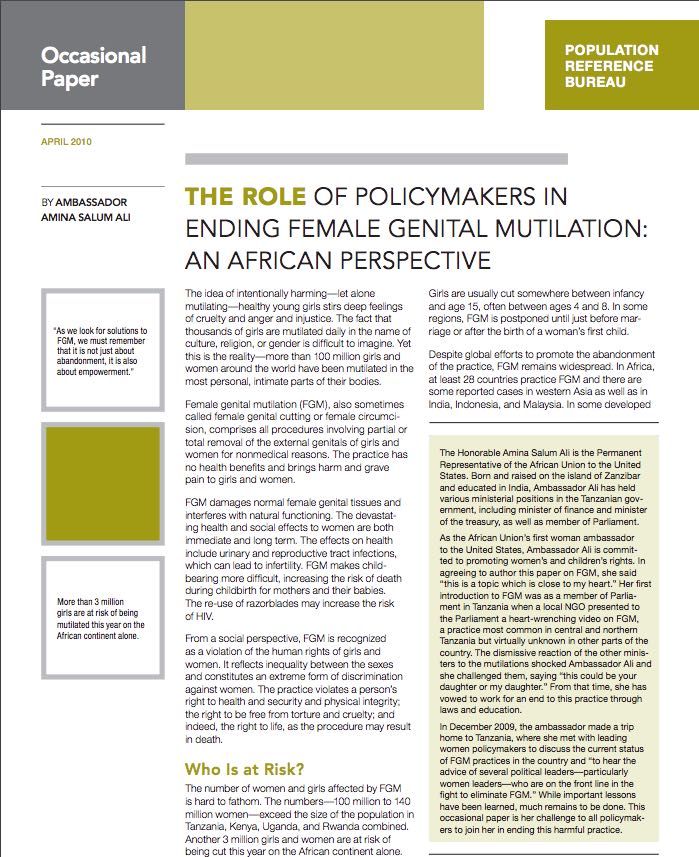 Report. The Role of Policymakers in Ending Female Genital Mutilation: An African Perspective

The Honorable Amina Salum Ali is the Permanent Representative of the African Union to the United States. Born and raised on the island of Zanzibar and educated in India, Ambassador Ali has held various ministerial positions in the Tanzanian government, including minister of finance and minister of the treasury, as well as member of Parliament.

As the African Union’s first woman ambassador to the United States, Ambassador Ali is committed to promoting women’s and children’s rights. In agreeing to author this paper on female genital mutilation (FGM), she said “this is a topic which is close to my heart.” Her first introduction to FGM was as a member of Parliament in Tanzania when a local nongovernmental organization presented to the Parliament a heart-wrenching video on FGM, a practice most common in central and northern Tanzania but virtually unknown in other parts of the country. The dismissive reaction of the other ministers to the mutilations shocked Ambassador Ali and she challenged them, saying “this could be your daughter or my daughter.” From that time, she has vowed to work for an end to this practice through laws and education.

In December 2009, the ambassador made a trip home to Tanzania, where she met with leading women policymakers to discuss the current status of FGM practices in the country and “to hear the advice of several political leaders—particularly women leaders—who are on the front line in the fight to eliminate FGM.” While important lessons have been learned, much remains to be done. This occasional paper is her challenge to all policymakers to join her in ending this harmful practice.