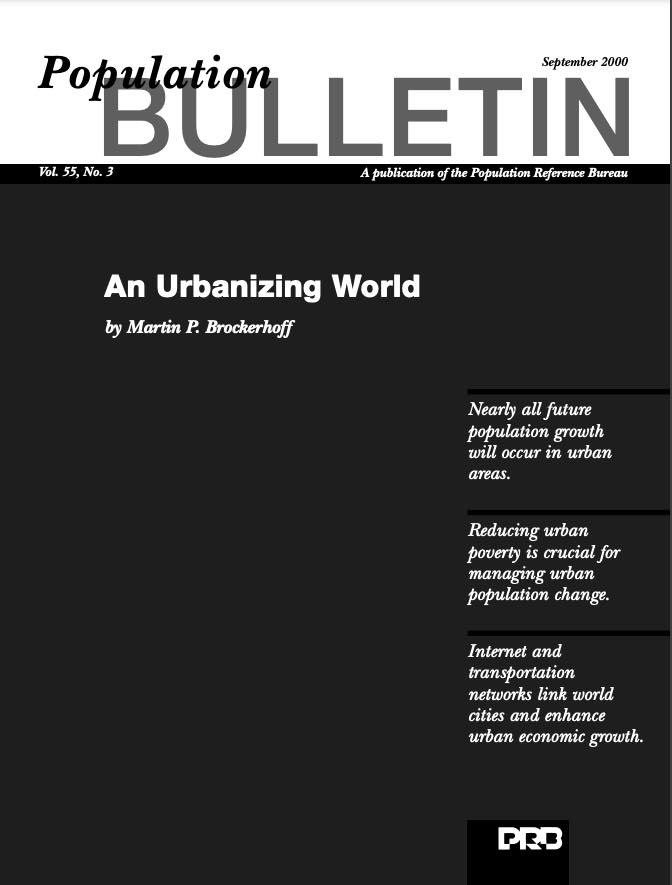 (September 2000) A report commissioned by the German government and released July 4 at the Global Conference on the Urban Future presents an upbeat view of the growth of cities in the 21st century. One reason the report gives for optimism is the “real prospect that population growth, the source of so many problems, will soon slow down … producing a much more steady state.”

Steady there, optimists. Growth rates of megacities — urban agglomerations of 10 million or more residents — have declined sharply, but this is misleading because these cities still have to absorb enormous population increments in the next 20 years; they face daunting challenges of management and governance to sustain health, well-being, and the environment.

The most credible estimates and projections of city size and growth come from the United Nations. These are still based on limited data and are subject to imprecision; projections in particular must be interpreted with caution. Even with a cautious interpretation, however, the picture that emerges from UN data is one of megacity growth, not decline.

Since 1980, the number of megacities in less developed regions has increased from three to 15. More significant demographically, these cities have generally been growing steadily in absolute terms, even as their rates of population growth have dropped in response to national reductions in fertility and to economic downturns that have deterred migration from rural areas.

There is debate about whether some of the world’s poorest megacities, such as Dhaka and Lagos, can effectively absorb the millions of additional residents anticipated in the near future (according to the UN, 9 million more for Dhaka and 10 million more for Lagos by 2015). Alarmists point to the plight of poor residents of Chicago, London, Manchester, New York, and other cities of now-industrialized countries during the era of these cities’ most rapid growth, 1875 to 1900. Although such cities experienced economic progress, they also tended to have higher mortality than rural areas, because of occupational hazards and infectious diseases associated with high population density and poor water and sanitation infrastructure.

The Dickensian conditions of that earlier time — child labor, dilapidated housing, crime, and class tension — are also observed in megacities of poor countries today but on a much larger scale. And they are often accompanied by high levels of pollution and fatalities from motor vehicles, illicit drug use, and widespread sexually transmitted infections such as HIV/AIDS. The greater magnitude of problems in megacities today is suggested by their rapid growth to enormous sizes.

On the other side of the debate are those who point to the benefits that megacities in developing regions could enjoy in the future. Many economists argue that cities have always been the engines of national economic growth, and that they achieve megacity size only because they are economically efficient for their countries. As international capital becomes more mobile with globalization, large pools of relatively low-skilled labor can attract foreign investment that leads to job opportunities in manufacturing and industry. The growth of Internet technology enables city governments to inexpensively share information regarding effective approaches to poverty alleviation, waste management, affordable housing, and other critical issues of giant cities.

Anthropologists have shown that the urban poor living in slums, shantytowns, and urban fringe areas of megacities are not marginal residents suffering social malaise, but industrious and resourceful people attempting to better their lives. Community mobilization and grass-roots initiatives organized and led by poor constituents have made hundreds of city neighborhoods more livable and could increase the productivity of labor in megacities if applied widely.

Regardless of how megacities are perceived, urban scholars, demographers, and decisionmakers have reached consensus on two issues regarding their treatment in the future. First, effective urban governance is needed to ensure the well-being of all residents. Second, there remains a need to improve the estimation and projection of megacity populations. Expanded data collection through conventional censuses and surveys, as well as through the use of new satellite imagery technology, will be necessary to provide better data for research and policymaking in the world’s largest cities.

For more on the demographics of urbanization, in particular on megacities in less developed countries, consult the following publications:

Martin Brockerhoff and Ellen Brennan, “The Poverty of Cities in Developing Regions,” Population and Development Review 24, no. 1 (March 1998): 75-114.