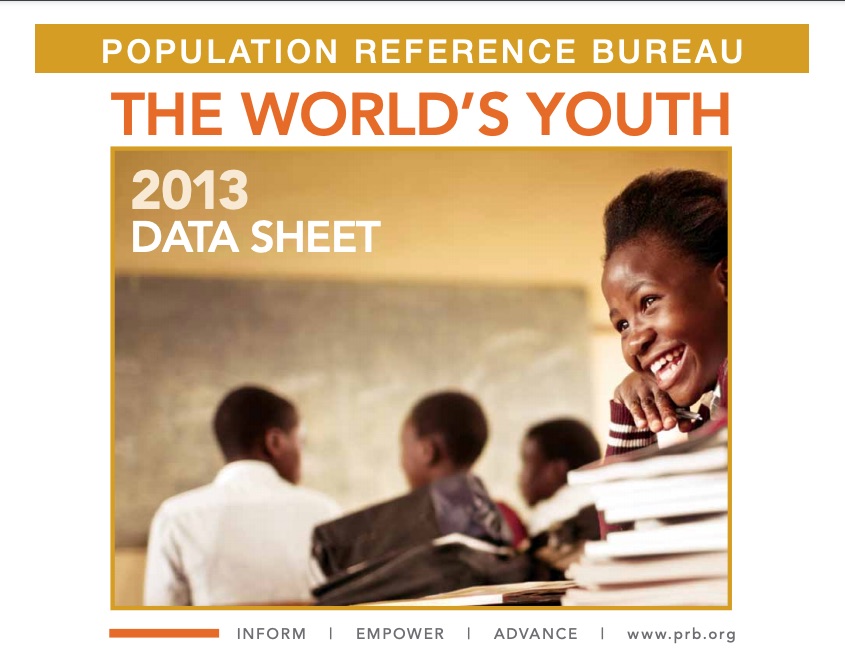 Girls and boys in developing countries are enrolling in secondary school in greater numbers than ever before, giving them knowledge and skills for healthy, productive lives. While this is good news, many young people still face challenges to employment, and they must also navigate serious risks to their health, such as smoking, early marriage and childbearing, or having unprotected sex.

The World’s Youth 2013 Data Sheet provides a comprehensive portrait of the well-being of youth ages 10 to 24 across the globe, including such indicators as the current and projected size of youth populations, educational enrollments, labor force participation, marriage and fertility, and health risks and behaviors.

Around the world, many women ages 15 to 19 are currently pregnant or have already given birth. This scenario is especially true in rural areas, where girls are married young and pressured to start having children immediately. In Zimbabwe, Senegal, and Colombia, more than one in five teenagers from rural areas have begun childbearing. And teenagers from the poorest households are more likely to become pregnant or give birth than those from the wealthiest households. In Zimbabwe, Senegal, Colombia, and Peru, more than one-quarter of teens ages 15 to 19 from the poorest 20 percent of households have begun childbearing. In Peru, the rate of early childbearing is nearly six times greater among those from the poorest households compared to the wealthiest.

Child marriage, defined as marriage before age 18, is practiced in all regions of the world. This harmful traditional practice not only violates the human rights of girls and young women, but also threatens their health and well-being. Nearly half of all women ages 20 to 24 in South Central Asia and Western Africa were married by age 18, putting them at a higher risk for early pregnancy and maternal disability and death, and limiting their access to education and employment. Although the prevalence of child marriage is lower in other regions, such as Southeast Asia and Western Asia, nearly one in five girls in those two regions was married by age 18. And in the poorest regions of the world—particularly Eastern Africa, Western Africa, and South Central Asia—more than one in 10 girls were married by age 15.

The adolescent fertility rate measures the number of births per 1,000 women ages 15 to 19. Although the number of births among adolescent girls is declining around the world, adolescent childbearing remains common in many countries, particularly in sub-Saharan Africa. Early childbearing poses serious consequences to the health and development of young girls. The risk of maternal death and disability is higher for adolescents than for women in their 20s. At the same time, early childbearing often limits girls’ opportunities for education, training, and livelihood development. Adolescent childbearing is more common in developing countries, where nearly 10 percent of adolescent girls give birth each year, compared to less than 2 percent in developed countries.

While many countries around the world have seen rapid progress toward universal primary education, ensuring that adolescents start and complete secondary education is crucial to their acquiring the knowledge and skills needed for healthy, productive lives. Progression to secondary school measures the likelihood that children who finish primary school will start their first year of secondary school. In the Philippines, nearly all children progress from primary school to secondary school. In Senegal and Lesotho, fewer than three-quarters of all students start secondary school, with girls less likely to progress compared to boys. While this transition may be more challenging for females than males, young men are also at-risk of leaving school too early. In the Dominican Republic and Mozambique, boys are less likely than girls to start secondary school.

Many countries around the world are concerned about young people who are not in education, employment, or training (NEET). While unemployed youth who are in school or receiving training are investing in their future employment prospects and earning potential, NEETs are unemployed and not engaged in education opportunities. When young people are not in contact with the education system or the labor market, they cannot develop key skills for meaningful employment. Across countries with available data, more young women than young men are classified as NEETs. This situation is particularly pronounced in countries like Niger and Pakistan, where more than two of every three young women are NEETs.