“How Can We Feed a Growing World and Still Sustain the Planet?” 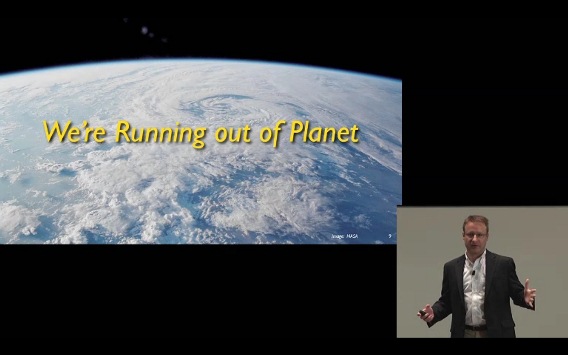 Increasing population and wealth, along with changing patterns of diet and consumption, are placing unprecedented demands on the world’s agriculture and natural resources. Today, approximately 1 billion people are chronically malnourished, even as our agricultural systems are degrading land, water, biodiversity, and climate on a global scale. Are there practical approaches that could support agricultural demand from a growing world population?

To meet the world’s future food security and sustainability needs, global food production must grow substantially while, at the same time, agriculture’s environmental footprint must shrink dramatically. In the Third Annual Malthus Lecture, Dr. Jonathan Foley presented possible solutions to this dilemma, showing that tremendous progress could be made by halting agricultural expansion, closing “yield gaps” on underperforming lands, increasing cropping efficiency, shifting diets, and reducing waste. Together, these strategies could double the world’s food production while greatly reducing the environmental impacts of agriculture.

Dr. Jonathan Foley is the director of the Institute on the Environment (IonE) at the University of Minnesota, where he is a professor and McKnight Presidential Chair in the Department of Ecology, Evolution and Behavior. He also leads the IonE’s Global Landscapes Initiative. He and his students have contributed to our understanding of global-scale ecological processes, global patterns of land use, the behavior of the planet’s climate and water cycles, and the sustainability of our biosphere. This work has led him to be a regular adviser to large corporations, NGOs, and governments around the world. He and his colleagues have published over 100 articles in the scientific literature, including highly cited work in Science, Nature, and the Proceedings of the National Academy of Sciences. He has also written many popular articles and essays, including pieces in the New York Times, Scientific American, SEED, E360, and the Guardian. In 1997, President Bill Clinton awarded him the Presidential Early Career Award for Scientists and Engineers.

The Malthus Lectureship, a partnership between the Population Reference Bureau (PRB) and the International Food Policy Research Institute (IFPRI), promotes the study of the connections among nutrition, food, agriculture, and population, and invites an outstanding scholar or policymaker to give a presentation each year.