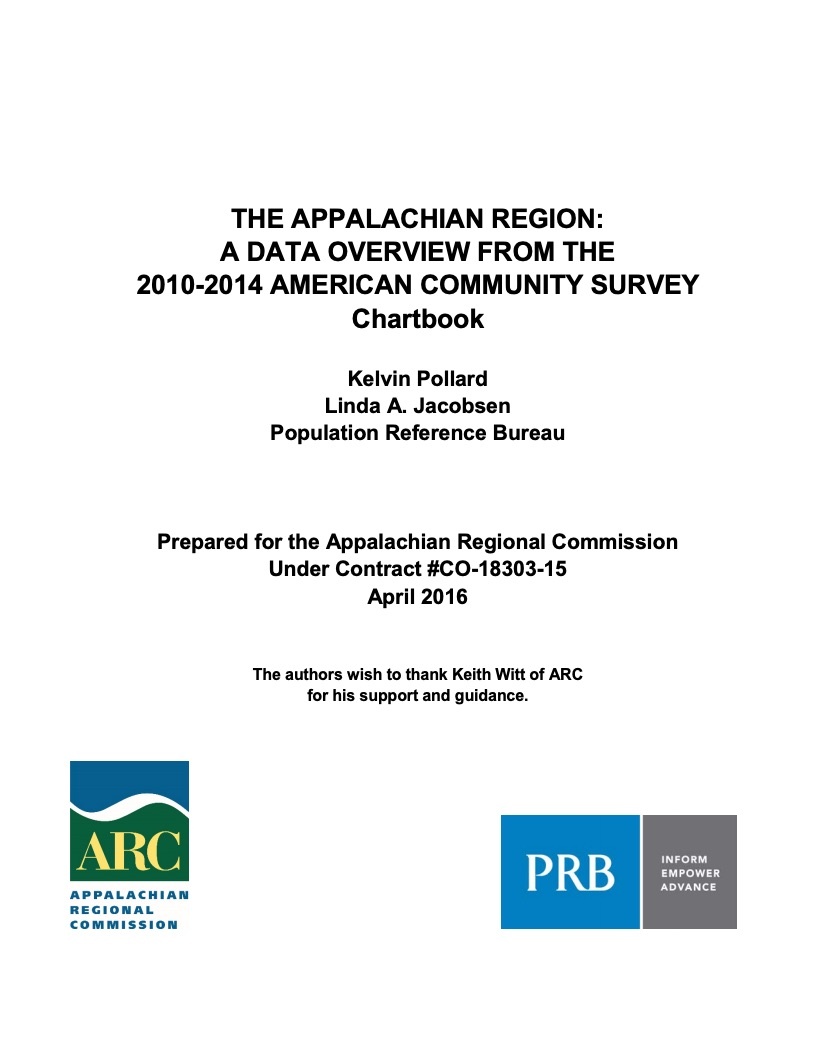 Chartbook. The Appalachian Region: A Data Overview from the 2010-2014 American Community Survey

Appalachia’s unemployment and poverty rates are still above levels seen before the economic downturn of 2007-2009, according to The Appalachian Region: A Data Overview From the 2010-2014 American Community Survey, prepared by the Population Reference Bureau (PRB) for the Appalachian Regional Commission.

This report—co-authored by Kelvin Pollard, PRB senior demographer, and Linda A. Jacobsen, PRB vice president of U.S. Programs—compares newly released American Community Survey data for 2010-2014 to 2005-2009 to show trends in income, employment, and other indicators at the regional, subregional, and county levels. The region encompasses 205,000 square miles along the Appalachian Mountains from southern New York to northern Mississippi, including portions of 12 states and all of West Virginia.

Between 2005-2009 and 2010-2014, Appalachia’s unemployment rate rose nearly two percentage points to 7.6 percent, just below the national average of 7.7 percent. Within Appalachia, the report shows that the jobless rate was at least 10 percent in 89 counties—71 of which were outside metropolitan areas and 75 of which were concentrated in the central and southern parts of Appalachia.

Since 2005-2009, the share of Appalachian residents in poverty (incomes below $24,008 for a family of two adults and two children in 2014) has risen nearly two percentage points to 17.2 percent in 2010-2014. Poverty increased in all subregions and among all county types. The rise in poverty rates was especially high in the Appalachian portions of Georgia and North Carolina, increasing more than three percentage points.

The report also shows that the region has continued to see its population grow. The latest estimates show the region had 25.5 million residents in 2014 (out of 318.9 million Americans nationwide), an increase of 234,000 people since the 2010 Census.

Overall, Appalachia’s residents are less likely to hold college degrees or be in the labor force than the U.S. population as a whole, but these and other demographic, health, and socioeconomic patterns vary widely within the region, according to the authors. They point to signs of a connection between unemployment and educational attainment: In 84 of the 89 Appalachian counties with double-digit unemployment, the share of 25-to-64-year-olds with at least a high school diploma was below the national average; in 35 of these counties, the share was less than four-fifths. During the 2010-2014 period, just 22 percent of adults in Appalachia had a bachelor’s degree, which was seven percentage points lower than in the nation as a whole. Indeed, the rate was lower than the national average in 399 of the region’s 420 counties. Yet there has been improvement—the regional share was almost two percentage points higher than it was in 2005-2009.