(May 2013) The high rates of adolescent fertility have been a particular concern in many countries. Reducing these levels in developing countries is one of the UN’s Millennium Development Goals. But even in some developed countries, high rates persist, particularly in the United States, where the teen birth rate is much higher than the rate in the majority of developed countries.

The adolescent fertility rate is defined as the number of births per 1,000 women ages 15 to 19. Having children this early in life exposes adolescent women to unnecessary risks. Their chance of dying is twice as high as that of a woman who waited until her 20s to begin childbearing. In addition, early childbearing greatly reduces the likelihood of a girl advancing her education and limits her opportunities for training and employment. Globally, the trend has certainly been downward, but there are very sharp differences in levels and trends across regions (see figure). 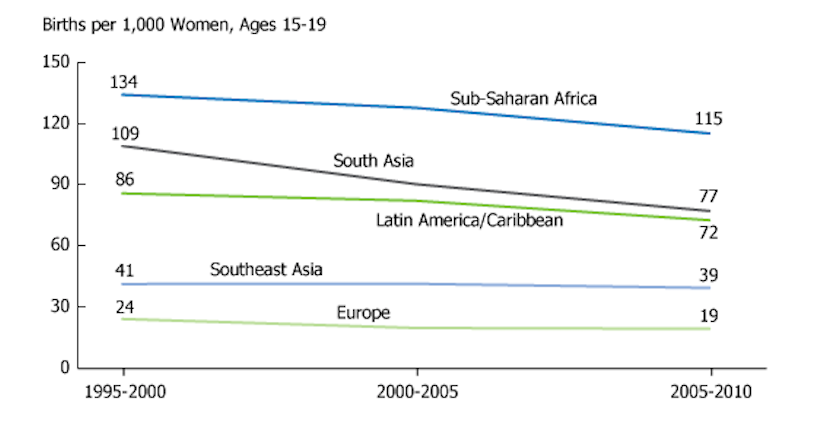 Note: The estimates for sub-Saharan Africa are largely based on Demographic and Health Surveys, Multiple Indicator Cluster Surveys, and censuses. Those are primary sources of data for the region given the lack of complete birth registrations.
Source: United Nations Population Division, World Population Prospects: The 2010 Revision (New York: UN, 2011).

Sub-Saharan Africa has the world’s highest level of adolescent childbearing. Its decline is a key factor in lowering both fertility and high population growth in that impoverished region. Estimates from the UN Population Division indicate that adolescent fertility declined from 134 live births per 1,000 women ages 15 to 19 in 1995-2000 to 115 in 2005-2010.1 Put another way, that means that 13 percent of 15-to-19-year-olds gave birth every year in 1995-2000 and that proportion declined only slightly to 12 percent in 2010. At that rate of decrease, it would take sub-Saharan Africa nearly a half-century to reach Europe’s current level of teenage childbearing of 19.

As measured in surveys, there are countries in sub-Saharan Africa where teenage childbearing has declined faster than the average pace: Benin, Cameroon, Eritrea, Ethiopia, Gabon, Ghana, Kenya, Namibia, Nigeria, Rwanda, Senegal, Tanzania, and Uganda. Still, even in those countries, rates are quite high by world standards, with half above 100.2 In five sub-Saharan African countries, the teenage rate has actually risen: Burundi, with a recent rate of 65, Chad (203), Congo (Brazzaville) (147), Lesotho (96), and Zimbabwe (115).

South Asia has had quite a steep decline in its adolescent fertility rate: from 109 in 1995-2000 to 77 in 2005-2010. The region is statistically dominated by India, where the rate was 57 in the most recent 2005-2006 Demographic and Health Survey. Such declines are often the result of maternal and child health programs being taken seriously by both couples and governments. From the early 1990s to recent times, both Bangladesh and Pakistan have also seen declines, but more so in Pakistan where the rate declined by 31 percent by 2007—to 51 from 74 in the early 1990s. Over the same period, Bangladesh’s rate fell by 16 percent but still stood at 118 in 2011. In Bangladesh, however, the total fertility rate (TFR, or the average number of children per woman) is lower than in Pakistan, 2.3 compared to about 4.0. Childbearing begins earlier but ends sooner in Bangladesh than in Pakistan. In Southeast Asia, decline has also lagged, but this region has a much lower level of adolescent fertility—41 births in 1995-2000, and 39 in 2005-2010.

Latin America and the Caribbean

In Latin America/Caribbean, adolescent fertility is 72 births per 1,000 women ages 15 to 19. From the mid-1990s to surveys taken recently, the Dominican Republic and Guatemala have shown some of the largest percent declines. Guatemala’s rate fell from 126 to 98 while that of the Dominican Republic declined from 112 to 92, but both are well above the region’s average. Both Haiti and Peru had a similar pattern and size of decline, from 76 to 66 and from 75 to 64, respectively. Based on surveys, it seems that declines in adolescent fertility may be rather gradual in Latin America/Caribbean.

The developed countries, as would be expected, have far lower rates than the developing countries. But there has been a slowing of the decline in these countries, which is expected as they may be approaching some type of long-term low rate. Among the industrialized countries, the United States stands out as having one of the highest rates: 31 births per 1,000 women ages 15 to 19, nearly twice that of Europe.

Reasons for the Decline in Adolescent Fertility

The causes of decline (or lack of decline) in adolescent fertility varies widely among countries. In countries where births outside of marriage are socially unacceptable, delayed marriage plays a significant role in the decline. But social norms, and expectations that girls will marry young, can also encourage early marriage and childbearing.

Keeping girls in school also delays marriage and childbearing. And data show that levels of education play a role as well: As women receive more education, their desired number of children declines. Effective family planning programs can help women choose the timing and number of children they have. But many countries struggle to extend family planning and reproductive health services to large rural populations and to the urban poor.