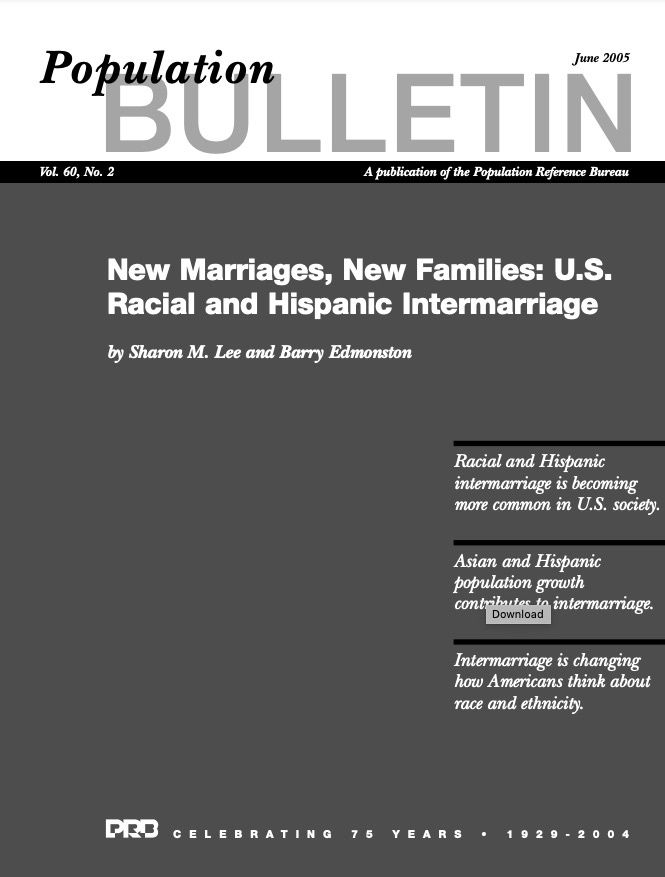 (June 2005) As the United States population becomes ever more diverse, are more people dating across race lines? The question isn’t simply a matter of whom you’ll be going out with on Saturday night. Since interracial dating (or “interdating”) and interracial marriage were outlawed or ostracized for so long in U.S. history, many sociologists see the incidence of these relationships as a key indicator of the state of U.S. race relations.

Indeed, despite its increasing depiction in the media, interracial romance is still America’s “last taboo,” according to Tom Smith, director of the General Social Survey at the National Opinion Research Center at the University of Chicago. “Many people who are honestly accepting of equal treatment across a wide range of social interaction would finally draw the line when it came to [a romantic relationship] between the race groups,” says Smith.

But that taboo might be slowly fading. The percentage of all U.S. married couples that are interracial nearly doubled from 2.9 percent to 5.4 percent between 1990 and 2000, to a total of more than 3 million.1 And recent surveys reveal that American attitudes toward intermarriage have also steadily improved: While 70 percent of adults in 1986 said they approved of interracial marriage, that figure had climbed to 83 percent by 2003, according to a Roper Reports study.2 “We are seeing declining levels of objection to interracial marriage,” says Smith.

More Than One-Half of Americans Have Interdated

Neither the Roper Report nor the General Social Survey specifically queried respondents on their attitudes or practices concerning interracial dating. But a study by George Yancey, a sociologist at the University of North Texas, found that interdating today is far from unusual and certainly more common than intermarriage.3

Yancey collected a sample of 2,561 adults age 18 and older from the Lilly Survey of Attitudes and Friendships, a telephone survey of English- and Spanish-speaking adults conducted from October 1999 to April 2000. He found that 35.7 percent of white Americans had interdated, along with 56.5 percent of African Americans, 55.4 percent of Hispanic Americans, and 57.1 percent of Asian Americans. Men and those who attended racially or ethnically integrated schools were significantly more likely to interdate.

Yancey says that whites might interdate less because they are a numerical majority within American society. And he adds that whites are also more likely to be racially isolated than people of color—a notion sociologists lump under the term “propinquity,” which describes the tendency for people to work better or bond with those geographically near them.

“If you think about communities in the Midwest, in places such as [rural] Wisconsin and Montana, if you’re white and even if you’re open to interracially dating, there are not that many people of color around,” Yancey says. “Chances are, if you’re a person of color, you’re more likely to be exposed to European Americans than vice versa.” However, his analysis also found that neither living in an integrated neighborhood nor attending an integrated place of worship boosted people’s interdating rates as much as attending an integrated school.

While Yancey studied interdating habits among adults, the future of interdating can perhaps best be understood by studying the activities and attitudes of teenagers. Younger people have historically been more open to racial integration and more positive about race relations than older people, according to Jack Ludwig, senior research director at the Gallup Poll in Princeton, N.J. According to a 2002 Gallup survey of 1,360 U.S. adults, 86 percent of people ages 18 to 29 approved of marriage between blacks and whites, but just 30 percent of those ages 65 and older approved of such marriages.

A 1997 Gallup national survey of people ages 13 to 19—found that nearly two-thirds (64 percent) of black, Hispanic, or Asian teens who had ever dated and who attended schools with students of more than one race said they had dated someone who was white. (This poll is the latest comprehensive survey of U.S. teens on the topic of interracial dating.)

Teens surveyed also had an overwhelmingly positive view of interracial dating. For instance, 72 percent of teens surveyed thought people dated people of other races because they cared about the other person, while less than 20 percent thought their peers interdated as a rebellion against parents or as an attempt to “be cool.” Nearly two-thirds (63 percent) of white students who had not dated interracially said they would consider dating someone who was not white, while 58 percent of black students would consider dating a nonblack.

But the Gallup survey also found that teens thought some interracial couples—always involving a black partner—faced potentially greater friction from their respective racial and ethnic groups about their relationships. For example, while no more than 11 percent of the teens surveyed thought a white-and-Hispanic or white-and-Asian couple would be ostracized by their respective racial or ethnic groups, about one-quarter of those surveyed said that a white and a black student dating each other would face problems from other white or black students in school.

Given these figures, it’s not surprising that Gallup reported that black students faced the highest rates of resistance from their parents over interracial dating of any group surveyed. Among students who had dated interracially, at least 90 percent each of white, Hispanic, or Asian students said their parents acquiesced to their relationship. But only 59 percent of black students who had interdated said their parents were comfortable with their dating. Ludwig says such parental wariness is not unusual, given blacks’ dimmer view of the state of U.S. race relations.

“People’s view of how things are going in terms of race relations in this country is really distinctively colored by their race,” he says. “The experience of living as a black person and as a white person in this country is quite different, despite substantial progress since the 1960s.”

Ludwig and Yancey both agree that interdating is unlikely to increase significantly over the coming decade. “It’s not increasing as fast as some people might be thinking,” says Yancey, who says that U.S. trends overall are trailing media depictions of the phenomenon.

Indeed, teens seem rather blasé about the significance of interdating: Only about one-quarter (24 percent) of the teens surveyed by Gallup thought the United States would be better off if more people interdated, while 9 percent thought the country would be worse off. However, the largest share—67 percent—thought an increase in rates of interdating would make no social difference at all. In a country that eliminated its antimiscegenation laws less than 50 years ago, perhaps this indifference is the most positive sign yet of progress in U.S. race relations.

Alison Stein Wellner is a writer based in New York City.