(February 2000) Hispanics, African Americans, and American Indians are more likely than non-Hispanic whites or Asians to work in lower-paying, semi-skilled jobs or as service workers. They are less likely to hold white-collar jobs, which range from managerial and professional to clerical positions. Blacks, Hispanics, and American Indians who do hold white-collar jobs are more likely than whites or Asians to work as typists, clerks, or salespeople rather than as higher-earning managers or professionals. And, while the share of U.S. workers in farming, fishing, or forestry is quite small, it is greatest among Hispanics, reflecting the large number of Hispanics who work in agriculture. 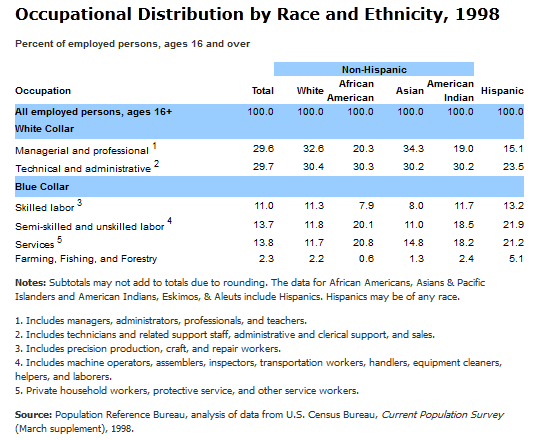 Data on occupational segregation are based on tabulations from the Census Bureau’s March Current Population Survey (CPS).

Statistics on minorities in professional sports are available from the Center for the Study of Sports in Society. “1998 Racial and Gender Report Card,” accessed online at www.nuway.neu.edu/sport/ in September 1999.