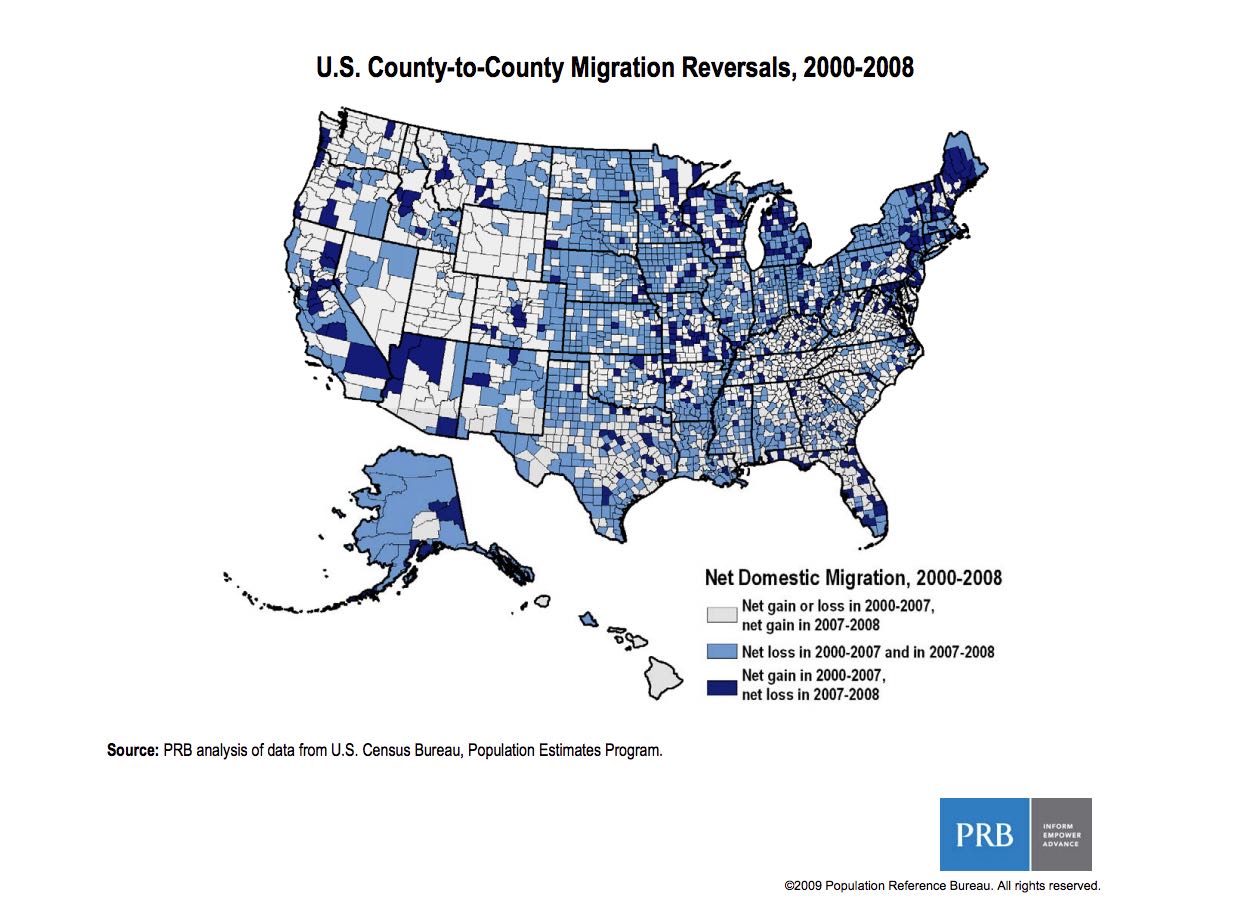 (March 2009) High unemployment rates are not just creating a drag on the U.S. economy, but are also linked to lagging population growth in economically distressed areas, according to a PRB analysis of data from the U.S. Census Bureau. Between 2007 and 2008, the population in distressed counties—areas with unemployment rates of 6 percent or more in 2007—grew 0.3 percent, compared with a 1.2 percent growth rate in areas with relatively low unemployment (less than 4 percent). Nationwide, the population grew 0.9 percent during 2007-2008.

Most states and counties are still gaining population, but trends vary widely in different parts of the country. While populations increased in every state except Michigan and Rhode Island between 2007 and 2008, more than a third of U.S. counties experienced population losses during this period. The population decline was most pronounced in Michigan, where 60 of the state’s 83 counties lost population during the year. Michigan’s unemployment rate currently stands at 11.6 percent, higher than any other state.

What is driving these population losses? For counties in Michigan and many other states, the main factor is out-migration: people moving from one county to another, often in search of better job opportunities. Between 2007 and 2008, counties with high or moderate unemployment experienced negative net domestic migration, meaning that the number of people moving out of those counties exceeded the number moving in (see figure). Only those counties with the lowest unemployment rates experienced a net gain of domestic migrants.

In contrast, there was a net gain of international migrants across a large majority of counties, regardless of unemployment levels. Many counties with high unemployment rates, such as the Bronx in New York, are important gateways for international migrants. Some immigrants move there for work but others use these areas as a launching pad to find jobs in other parts of the country.

Net Population Change From 2007 to 2008, by County Unemployment Rate

About one in eight U.S. counties (the ones shaded dark blue in the map) experienced a recent reversal in domestic (county-to-county) migration, from a net gain in 2000-2007 to a net loss during the more recent period from 2007 to 2008. The drop in domestic migration is evident not only in Michigan but also in parts of Florida, interior California, northern New England, and the outer suburbs of metropolitan New York and Washington, D.C. For Florida, the latest census figures represent a major reversal, from a net gain of more than a million domestic migrants from 2000 through 2007 to a net loss of nearly 10,000 migrants between 2007 and 2008. Parts of Florida, California, and many suburbs of large metropolitan areas were hit particularly hard by the mortgage meltdown, which likely contributed to these recent population losses.

Even with the recession that began in December 2007, there were pockets of rapid population growth. Nearly 300 counties nationwide, mostly in the South and West, grew at least 2 percent between 2007 and 2008—more than twice the national rate. In Texas, 47 of the state’s 254 counties grew at least 2 percent during this most recent period, and Georgia had 34 such counties (out of 159). One-fifth of the counties in North Carolina and over two-thirds of those in Utah also grew by 2 percent or more (20 counties in each state). In fact, Utah recently replaced Nevada as the fastest-growing state in the country. Population growth may have slowed in some of these areas given the economic events of recent months, but we won’t know the full impact until next year, when the 2009 county population estimates are released.