(March 2014) Ukraine, a former republic of the Soviet Union, has undergone a series of dramatic demographic changes since its independence in 1991. Most significant, its birth rate declined sharply following independence, mirroring similar developments in other former Soviet republics. Ukraine’s demographic outlook has changed from a country with a modestly high birth rate to one with more rapid aging and a smaller number of young people. These developments are shared with many industrialized countries in Asia, Europe, and North America.

For much of the 1980s, Ukraine’s total fertility rate (TFR) was two children or more per woman.1 But by 2001, the TFR had declined to an extremely low 1.1 (see figure). At that point, deaths in the country outnumbered births, resulting in a natural population decrease of 373,000 combined with a net out-migration of over 130,000. Population decreased by about a half-million per year, and the country’s population, which had been 52 million at the start of the 1990s, has fallen to 45 million by the beginning of 2014. 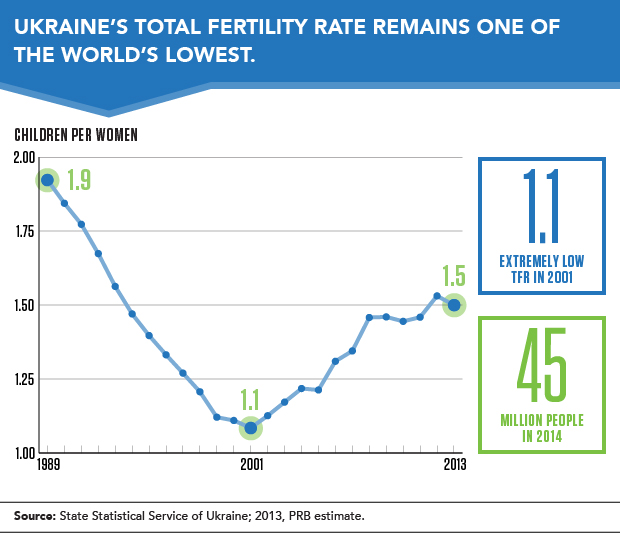 The decline in the birth rate can be attributed to a number of factors. Economic uncertainty following the breakup of the Soviet Union had the same depressing effect on fertility as it had elsewhere. Many day-care centers closed after independence due to a lack of funds or low birth rates in their areas. Some state-run centers became private and, thereby, much more expensive.

Subsidies given to women for children in the early 1990s were quite low and often not paid in full because of budget constraints. In addition, applying for benefits was too complicated to make the small payment amounts worth the effort. In 2005, the government increased payments for the birth of a child and support to the mother for the first year, in addition to the increased maternity leave introduced earlier. While the introduction of these benefits was not completely smooth, Ukraine’s TFR has experienced a slow increase since then, rising to 1.5 by 2011, although pausing in 2013. Still, Ukraine’s TFR remains one of the world’s lowest.

The youngest age groups have obviously been diminished by the sharp decrease in the TFR. Despite the recent partial recovery in the TFR, these young cohorts will gradually move up the age ladder into their childbearing years, but will experience a sharp drop in the number of births over time, even if the TFR rises somewhat. At the same time, those moving into the older age groups will grow steadily in number. Between now and 2050, the number of deaths will likely be nearly twice the number of births: Natural population decrease appears to be permanent in Ukraine’s future. Accordingly, the United Nations projects that the proportion of Ukraine’s population ages 65 and over will rise to 22 percent in 2050, up from 15 percent today. That jump will be greater if life expectancy increases.

Ukraine has a geographically uneven mix of ethnic groups. About two-thirds of the country’s population speaks Ukrainian while one-third speaks Russian.2 Crimea, which was part of Ukraine until the vote in March 2014 to become part of Russia, is 77 percent Russian-speaking. Among cities, 72 percent of people in the national capital of Kiev speak Ukrainian. In Sevastopol, a city in Crimea, 91 percent of residents speak Russian.

Today, in addition to the annexation of part of Crimea by Russia, Ukraine must deal with these unprecedented demographic challenges.