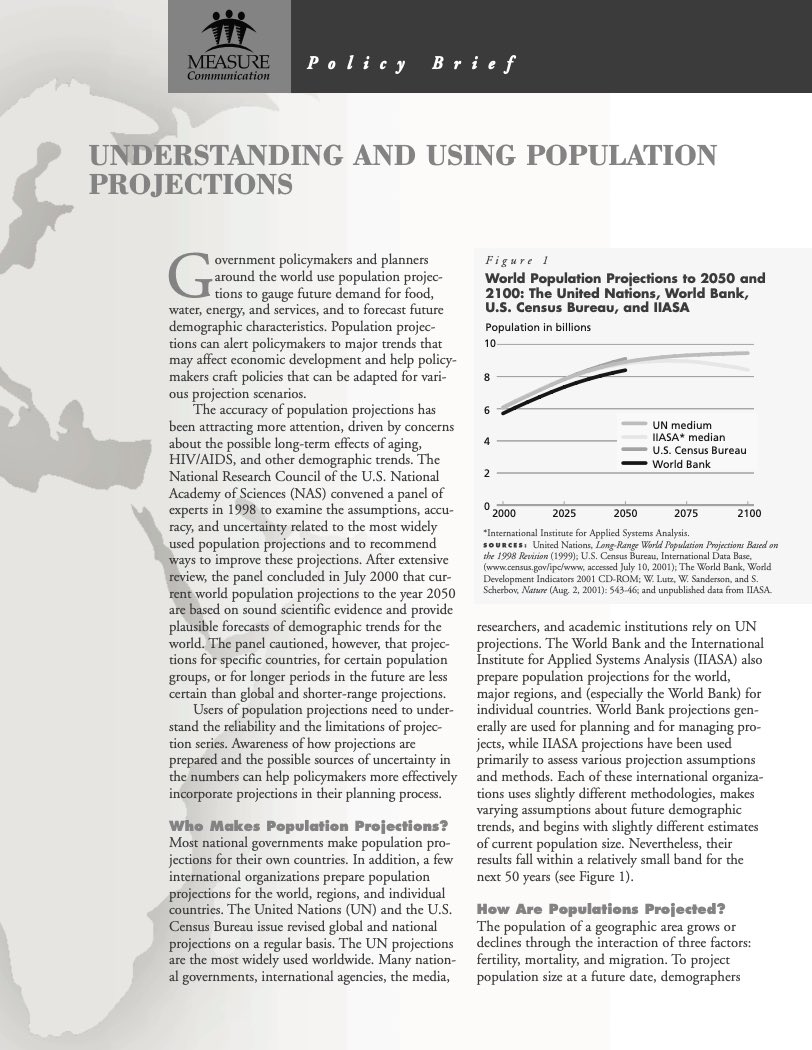 The accuracy of population projections has been attracting more attention, driven by concerns about the possible long-term effects of aging, HIV/AIDS, and other demographic trends. The National Research Council of the U.S. National Academy of Sciences (NAS) convened a panel of experts in 1998 to examine the assumptions, accuracy, and uncertainty related to the most widely used population projections and to recommend ways to improve these projections. After extensive review, the panel concluded in July 2000 that current world population projections to the year 2050 are based on sound scientific evidence and provide plausible forecasts of demographic trends for the world. The panel cautioned, however, that projections for specific countries, for certain population groups, or for longer periods in the future are less certain than global and shorter-range projections.

Users of population projections need to understand the reliability and the limitations of projection series. Awareness of how projections are prepared and the possible sources of uncertainty in the numbers can help policymakers more effectively incorporate projections in their planning process.

How Are Populations Projected?

The population of a geographic area grows or declines through the interaction of three factors: fertility, mortality, and migration. To project population size at a future date, demographers make assumptions about levels of fertility and mortality and about how many people will move into or out of an area before that date. The net population increase or decrease over the period is added to the “baseline” (beginning) population to project future population.

All of the major international agencies that project populations base their projections on current population estimates and assumptions about how fertility, mortality, and migration will change over time. Recent projection methodologies have focused on identifying uncertainty in projections — that is, on developing estimates of the probability that the future population size will fall within a certain range. Demographers try to measure the uncertainty of population projections by consulting other experts; analyzing errors in previous projections; and examining trends in fertility, mortality, and migration.

How Accurate Are Projections?

The accuracy of current population projections cannot be directly evaluated, but the success of previous global and country-level projections can be examined. Twelve times since the 1950s, the UN has projected the world population size for the year 2000. All but one of these projections has been off by less than 4 percent.

Projections for specific countries and age groups have not been as accurate, however. In general, projections of future population size tend to be more uncertain, or less accurate:

What Will Determine Future Population Trends?

Population change reflects the interplay of fertility, mortality, and migration, but in less developed regions, where fertility levels are high, fertility has the greatest effect on future population size. Years of high fertility produce a young population age structure, which generates momentum for future growth as these youth begin having their own families. Today, average fertility in less developed countries is 3.2 children per woman, or one child more than “replacement-level fertility,” in which couples have about two children each and replace themselves in the population.

In the latter half of the 20th century, fertility fell nearly everywhere in the world, although not at the same pace (see Figure 2). Based on evidence from the last half century, demographers and other researchers have formulated several theories about the likely path of fertility decline in more developed and less developed countries.

Most countries, however, have above replacement-level fertility, and the UN has assumed that their fertility rates will decline to replacement level and remain constant thereafter. Although the 1980s and 1990s saw rapid fertility decline in a number of countries, most projection series show the pace of decline slowing as countries reach lower fertility levels. Demographers are less certain about the timing and extent of the decline. The various projection scenarios published by the UN and other agencies reflect different assumptions about future fertility decline (see Figure 3).

World Population Projections to 2050 Under Three Assumptions of Fertility

Note: The TFR (total fertility rate) is the average total number of children a woman would have given current birth rates.
Source: United Nations, World Population Prospects: The 2000 Revision (2001).

The HIV/AIDS epidemic represents an unexpected demographic crisis: It has lowered the projected life expectancy for sub-Saharan Africa, in particular, where infection rates are above 2 percent of the population in 45 countries. In the nine most affected countries (mostly in eastern and southern Africa), current UN estimates show that AIDS mortality lowers the projected 2015 population by nearly 18 percent compared to what it would have been without AIDS. If exceptionally high rates of infection are contained within a small number of countries, HIV/AIDS will have a moderate effect on population growth in Africa. But if HIV/AIDS prevalence reaches similarly high levels in other sub-Saharan regions, as well as in Asia, Latin America, and Eastern Europe, HIV/AIDS could lower life expectancy in these regions and affect world population growth.

Future international migration is more difficult to project than fertility or mortality because migration flows often result from short-term changes in economic, social, or political factors that are hard to predict or quantify. Migration can have a significant effect, however, on population change in specific countries and regions: International migration accounted for nearly half of the population growth rate in more developed countries in the 1990s, for example. Flows of refugees following political or civil unrest have also altered the demographic landscape in some less developed countries.

No methods exist to predict sudden mass migrations generated by political, economic, or environmental crises. The best demographers can do is to revise their estimates as soon as new information is available.

What Do Projected Trends Imply?

Social, economic, and environmental changes, along with government policies, can influence future demographic trends — especially fertility levels — which ensure some uncertainty in population projections. Because of the compounding effects of past fertility levels on a population’s age structure, and the inherent uncertainty in projecting future trends, the long-range scenarios from various institutions span a wide range. Nevertheless, there are some similarities between the central or “most likely” projections and between the plausible ranges of population size projected by different institutions.

The U.S. Census Bureau pegs world population at 9.1 billion in 2050, compared with 9.3 billion for the latest medium projection by the UN, 8.7 billion from the World Bank, and 8.8 billion from IIASA. By 2100, the differences in the central estimates of these institutions widen to a billion or more, and differences between the low and high scenarios span more than 10 billion — from 4 billion to 16 billion.

The NAS panel recommended, among other things, that demographers develop new ways to characterize the uncertainty that is associated with any population forecast: Demographers should state the probability that future world population will be, for example, between 10 billion and 12 billion. These methodological refinements, along with continued improvements in the assumptions used to create projections, will make the projections more valuable for a wider range of users. When users are aware of the assumptions behind the estimates, they can make informed judgments about the most likely scenario for a particular population.

How Can Policymakers and Program Planners Best Use Projections?

This brief summarizes the major findings of the Panel on Population Projections of the National Research Council of the U.S. National Academy of Sciences and includes portions of a Population Reference Bureau Population Bulletin by Brian O’Neill and Deborah Balk (see references at below). PRB gratefully acknowledges contributions and comments from Michal Avni, John Bongaarts, Rodolfo Bulatao, Barney Cohen, Bessie Lee, and Ellen Starbird. This work has been funded by the U.S. Agency for International Development (USAID) under the MEASURE Communication project (HRN-A-00-98-000001-00).