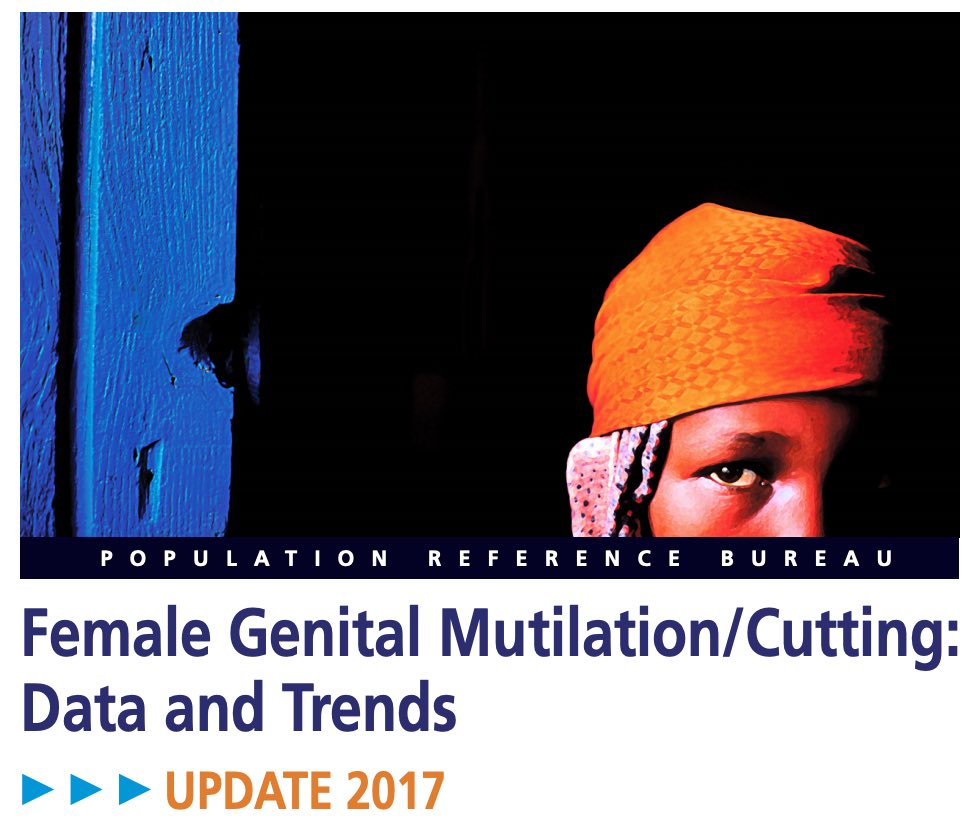 New evidence suggests that the share of women and girls who have undergone female genital mutilation/cutting (FGM/C) is declining in many countries, with girls less likely to be cut than previous generations of women.

The latest edition of PRB’s wallchart includes updated estimates for 16 countries based on surveys since 2014. In 12 of those countries, the percentage of women ages 15 to 49 who have been forced to undergo FGM/C declined compared to the results from surveys conducted between 2003 and 2011.

The wallchart also shows that in one-third of countries with data, FGM/C is half as common among young women (ages 15 to 19) than among middle-age women (ages 45 to 49).

The steep decline in prevalence among young women in some countries suggests that efforts to end FGM/C are yielding results, says Elizabeth Leahy Madsen, PRB program director and wallchart author.

“The drop among young women reflects positive winds of change. Fewer families appear to be choosing to have their daughters cut.”

For example, in Burkina Faso, where nearly 90 percent of women in their 40s have been forced to undergo FGM/C and it typically occurs before age 5, the low prevalence rate among young girls (14 percent for ages 5 to 9; 5 percent for those under age 5) provides evidence that a growing share of families are abandoning the practice.

Education appears to be a key factor in reducing the prevalence of FGM/C. In many countries, daughters of women who have some schooling are much less likely to undergo FGM/C than daughters of women with no education, the wallchart estimates show (see figure). 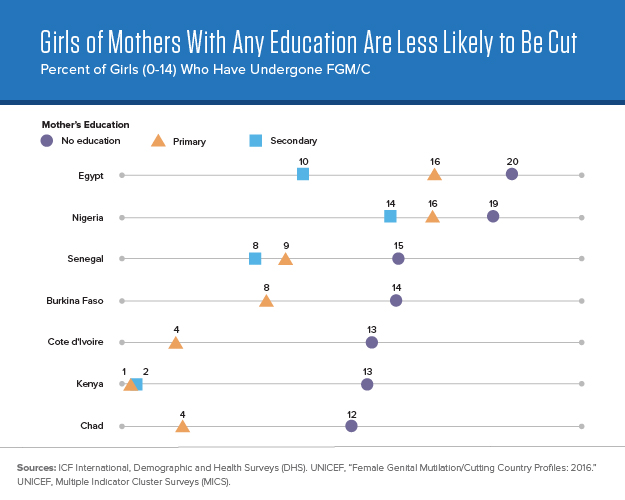 Even a small amount of schooling of mothers is associated with factors that appear to protect their daughters from FGM/C, Madsen notes.

“Educated women may be more likely to go against cultural norms,” she suggests. “Expanding education for girls could contribute to further declines in the practice.”

Research shows that FGM/C poses serious physical and mental health risks for women and girls, including increased complications in childbirth and maternal deaths.1 FGM/C is generally performed on girls between ages 4 and 12, although it is practiced in some cultures as early as a few days after birth or as late as just prior to marriage.

The practice is strongly associated with ethnicity and occurs in many religious groups (including among Muslim, Christian, animist), although no religion mandates it. Social networks and community norms may play an important role in individual and family decisions about whether to continue the practice.

While the share of women forced to undergo FGM/C appears to be declining in many countries, population growth means that the absolute numbers of women and girls worldwide who have undergone this harmful practice will continue to increase. Recent global estimates suggest that at least 200 million women have undergone this procedure.2