Why the Chimpanzees of Gombe National Park Are in Jeopardy

Gombe National Park, a 35-square kilometer park in Kigoma Region in northwestern Tanzania, is most popularly known as the place where Jane Goodall conducted her pioneering research on chimpanzees beginning in the 1960s (see map). But over the past four decades, the chimpanzee population of Gombe has dropped from about 150 at the time Goodall arrived to approximately 90 today, while human population growth in the region and specifically around the park has soared.1

The reasons for the drastic decline in Gombe’s resident chimp population are well-known to scientists and park personnel: too little habitat and too much disease. Either habitat loss or regularly occurring disease outbreaks can precipitate a significant population decline for any particular species—but when both come into play, the results can be especially devastating.

It is now largely in the hands of humans—park staff, researchers, rural development professionals, tourists, and local communities—to conserve Kigoma’s remaining forests and to create and maintain a healthy environment so that the chimpanzees of Gombe might survive the 21st century.Population Growth and Human Activity Put Pressure on the Park

Kigoma Region, which is just over 37,000 square kilometers in size, has a human population of 1.7 million. A large immigrant population—mainly refugees from Burundi and Democratic Republic of Congo—has combined with Kigoma Region’s very high fertility rate to produce a regional population growth rate of 4.8 percent per year—the highest regional growth rate in Tanzania, which has an overall growth rate of 2.4 percent.2

This high population growth has led to a significant reduction in the amount of forested land around Gombe National Park, as people clear the land to make way for houses and farms. The practice of slash-and-burn agriculture (known locally as “shifting cultivation”) and cutting trees for making charcoal and firewood has also contributed to the deforestation of Kigoma.

“Shifting cultivation is the biggest environmental threat to the region,” says Aristide Kashula, a forester with the Jane Goodall Institute in Kigoma. “We have been working with farmers in 24 villages around Gombe to encourage the adoption of agroforestry approaches to farming, as well as teaching them to contour their fields and plant native grasses to combat soil erosion. But we are still struggling with deforestation.”

In fact, the park—always considered tiny compared to the other protected areas of Tanzania —is now described by Gombe-based researchers as an “island” of biodiversity, bordered by Lake Tanganyika on the west and by human settlements on its northern, eastern, and southern boundaries. Because of its small size, the bordering forests outside the park were once critical in providing “spill-over” habitat space for chimpanzee and other large mammal species. Without these forests to support them, large mammals such as lions and buffalo have already disappeared from the area completely, and the shrinking habitat is now causing problems for the remaining chimpanzees.

While other primates (such as baboons and red colobus, red tail, and blue monkeys) have managed to thrive in Gombe, chimpanzees have not. Their larger body size puts them at a disadvantage in a restricted habitat, because they must consume more calories (and thus more food) to grow and maintain their weight. Furthermore, chimpanzees’ more specialized physiology means that they cannot eat grass, stems, or unripe fruit—things that baboons and other monkeys are able to eat.

As food availability decreases and competition for it increases, chimpanzees and other animals have become more likely to venture outside park boundaries. Often, this exploration has led to raids on nearby farms for maize and grains as well as vegetables and fruits. Local people have responded by aggressively trying to protect their livelihoods, setting traps, hunting, or erecting barriers to their land. These residents have also come to mistrust protected-area staff, researchers, and tourists—endangering the cooperation of local communities in the park’s efforts to protect its wildlife.

Such “people-park conflicts” are not unique to Gombe National Park. In fact, conflicts between people and wildlife have increased substantially around protected areas during the past decade because of increasing human populations and their activities, including expanding settlements, agriculture, livestock husbandry, deforestation, charcoal burning, tourism, and research.3

For wildlife, the “edge effect” of human encroachment on habitat results in increased mortality and morbidity. The Gombe chimps have exhibited inter-community conflict—violence between two communities of chimpanzees that otherwise would not have come into contact with each other, but are now competing over the same area of forest. Stress has also become an issue, making the chimpanzees even more susceptible to conflict and disease.

To better understand how current conditions in Gombe will affect the chimpanzee population in the future, Mike Wilson, director of field research at the Gombe Stream Research Center, has overseen the Population and Habitat Viability Analysis, a computer-simulation exercise based on certain assumptions about chimpanzees’ fertility, mortality, and other variables. Results of the simulation show that, should present trends continue, Gombe’s chimpanzee population will continue to decline over the next 50 years, perhaps to about one-half of its current size.4

“Without adequate habitat, it will be impossible for the chimpanzee population of Gombe to increase or even to be maintained,” says Wilson.

While habitat loss is the biggest constraint to maintaining a viable population of chimpanzees in Gombe National Park, the biggest killer of the primates is disease, accounting for approximately one-half of chimpanzee mortality. Scientists believe that humans are likely the transmitters of many of the diseases—such as polio (with an outbreak in 1966); respiratory tract infections (outbreaks in 1968, 1978, 1987, 1996, 2000, and 2001-02), and scabies (in 1997)—that have manifested in the chimpanzee population over the past four decades.5

In Gombe, the most common ailment of chimpanzees is respiratory disease, including pneumonia. In 1996, at least 11 chimpanzees died from a flu-like epidemic, and in 2001 at least 30 fell ill after a similar outbreak.6 In both cases, researchers and park staff strongly suspect humans as the source of the virus.

The fact that humans share 97 percent or more of their genetic makeup with chimpanzees and other great apes means that the risk of disease transmission between humans and chimpanzees is potentially high. A study conducted in Kibale National Park, Uganda in 1999 suggests that chimpanzees there are indeed exposed to human diseases through their regular contact with both tourists and local residents.

Self-reported medical surveys were administered to tourists and to local community members to determine the potential for human-to-animal disease transmission. The returned tourist surveys indicated a high prevalence of disease symptoms, particularly diarrhea, as well as ongoing infectious diseases and a lack of current vaccinations. The local surveys also indicated a high prevalence of disease symptoms—in particular, respiratory disease.7

As in Kibale National Park, the close proximity of chimpanzees and humans in Gombe National Park increases the likelihood of disease transmission. Local residents, fishermen, tourists, researchers, and park staff regularly come into contact with the chimps, either intentionally or unintentionally.

“People and chimps often cross paths on the public-access beach that borders the park,” says Matatu Mushi, chief park warden in charge at Gombe National Park. “And chimps love to pick up litter that people leave behind there—they chew on clothing, cardboard, and any other human-made product. Unfortunately, this only increases the risk of disease transmission from humans to chimpanzees.”

While the risk to chimpanzees in Gombe is rising from human population growth and human activity around the park, protected areas do have tools at their disposal to guard animal populations—particularly great apes—from further deterioration. A PRB web article next month will detail some of these solutions and discuss how they could be applied to the chimpanzees of Gombe. 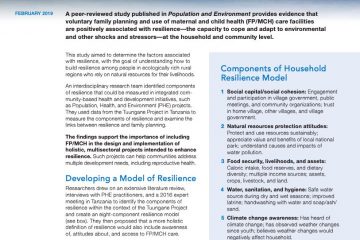