(August 2013) Twelve women journalists from Africa, Latin America, Asia, and Eastern Europe talked with one another about the status of women in their cultures. The Africans said women in their countries have many babies, often too many to care for adequately. Reporters from India, the Philippines, and Peru said families were somewhat smaller in their countries. Then the Romanian journalist surprised them all: “You know, in my country the government pays women to have children,” she said, explaining Romania’s strategy to reverse its population decline.

This conversation took place at PRB’s Women’s Edition, a program that brings together groups of veteran women journalists from influential media houses across the developing world to examine and report on a range of issues related to women’s health and development. They gain a global perspective on these issues by learning how countries both similar and different from theirs handle the same issues. As a Nepali reporter put it after several years in the program, “Now I think globally and write locally.” 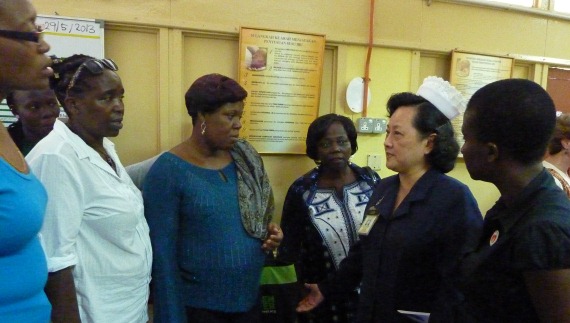 Women’s Edition journalists toured the Maternity Hospital, part of Hospital Kuala Lumpur, where staff described the country’s universal health care system. The journalists were in Malaysia in May 2013 and covered the Women Deliver conference as part of their seminar.
© Population Reference Bureau.

Women’s Edition, funded by the U.S. Agency for International Development, takes a long-term view of working with journalists. Since 1994 when the program began, 84 journalists have participated. There was little turnover in the early years, but later a two-year participation limit was set. During their tenure in the program, the journalists attend week-long seminars twice a year in locations around the world. Seminars focus on health and development issues. Each journalist takes away new data and research on specific topics, the insights of experts and memorable experiences from field visits that illuminate the issues. Following each seminar, each journalist prepares a special supplement, a series of articles or a broadcast program for her media house on the seminar topic in the context of her country.

PRB solicits applications from women editors, reporters, and producers every two years. Journalists hear about this from national and international journalism associations, schools, and websites. Nearly 300 candidates applied in the latest round and 15 were selected to participate. PRB looks for seasoned journalists who demonstrate a strong interest in women’s health and development issues and who have editorial influence in their newsrooms. To maintain geographic diversity, usually just one journalist is selected from a country.

Women’s Edition grew from an earlier PRB project, Global Edition, which brought together senior editors from the developing world to focus and write on population and the environment. Similarly, Women’s Edition’s mission is to strengthen and increase reporting on women’s health and development and, in doing so, stimulate discussion on these issues among the public and policymakers in developing countries. 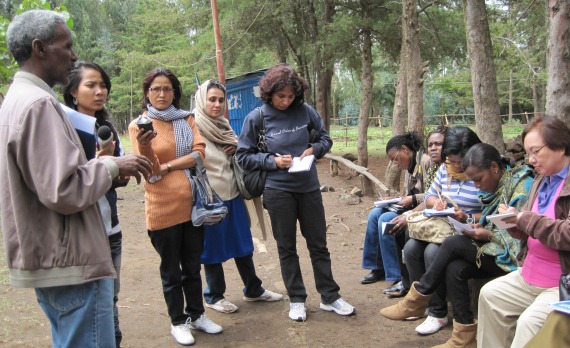 The 2011 Women’s Edition journalists interviewed the headmaster of a school in Fiche in rural Ethiopia, where the journalists visited a project that was integrating family planning and environmental conservation to promote health and sustainable development.
© Population Reference Bureau.

In organizing the seminars, PRB seeks input from the journalists in selecting a topic and then links the topic with a relevant venue. For example, for a seminar on violence against women, Women’s Edition met in South Africa, which has one of the world’s highest rates of rape but also some of the most innovative programs to deal with the problem. In Ethiopia, the journalists could see how projects were linking population, health, and environment; and in Indonesia they examined factors that considerably increased contraceptive use and reduced fertility. Some seminars have been held in conjunction with international conferences and other events, such as international family planning  conferences and special UN sessions. Other seminar themes have included links between gender and the environment, women’s empowerment, and women’s reproductive health.

Sometimes a journalist’s report prompts action. After a magazine cover story on the health and social problems child brides face in India, the Tamil Nadu state government launched awareness campaigns in villages where child marriage is common. More often, the journalists receive calls from ministry officials, parliamentarians, and NGO leaders who want more information. A Malawian journalist wrote about an innovative rape crisis center her Women’s Edition group visited in Johannesburg. She received a call from the Malawian president’s daughter, who wanted to become involved in local efforts to replicate it. Sometimes journalists take action on their own: A seminar visit to a rape crisis center in New York so inspired an Indian journalist that she persuaded a physician friend to open such a center in Mumbai.

Women’s Edition has a lasting impact on the journalists themselves. They become the experts in their newsrooms on women’s issues. They gain confidence in their knowledge and abilities, which helps them to lobby for coverage of women’s issues. They receive job promotions and gain more influence over what issues are considered newsworthy. “Gone are the days when health and women’s issues were a once-a-week affair,” said Ropa Mapimhidze of Zimbabwe, who was assistant editor at the Herald when she participated in Women’s Edition.

Deborah Mesce is program director of International Media Training at the Population Reference Bureau, and coordinates the Women’s Edition. An earlier version of this article appeared in Women in the World Today: Global Women’s Issues, published in 2012 by the U.S. Department of State, Bureau of International Information Programs.