(January 2008) Mama Joyce and Josephine are unlikely heroines. Mama Joyce, who lives in Mwanza, Tanzania, gave birth to 10 children with her husband, who brought home a second wife and the HIV virus. Josephine lives in Kampala, Uganda, and was pulled out of school, married off at 18, and stuck in a violent marriage when her family could not repay the “bride price.”  Both women were brought low by abusive husbands who beat them, took away their dignity and choices, and left them with AIDS.

But both women have emerged as heroines, as captured in “SASA! A Film About Women, Violence and HIV/AIDS,” produced by the Uganda-based NGO Raising Voices (www.raisingvoices.org)  and The People’s Picture Company (www.theppcinc.com). This powerful film tells the story of how these courageous women triumphed over gender-based violence and HIV/AIDS and gained power that helped them organize, become activists in their communities, and build meaningful and rewarding lives.

The film’s director and co-producer, Chanda Chevannes, recently presented the film at an Interagency Gender Working Group meeting in Washington, D.C. The film has already garnered awards at human rights festivals around the world. 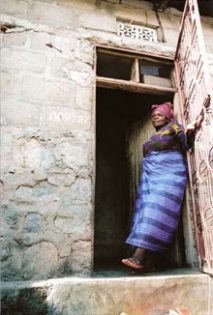 Once stuck in a violent marriage, Tanzanian Mama Joyce now speaks out against gender-based violence.

Violence Against Women Is Often the Norm

When conducting in-country interviews, Chevannes recalls that she was “surprised by the fact that violence against women, and especially domestic violence, is often seen as ‘normal’ in the region.”

When she asked women who had been infected with HIV by their partners to describe their relationships, they usually mentioned some form of violence. “Time and time again, almost every woman who came forward had a story of violence—physical, emotional, economic, or sexual—and many times all four,” says Chevannes.

“This initial experience really drove the realization home for me that, for many women in sub-Saharan Africa, violence is part of an intimate relationship. It is often not even seen as ‘violence’. ”

Violence and HIV/AIDS are well-documented realities in this part of the world, especially for women. More than two-thirds of all HIV-positive people live in sub-Saharan Africa and more than three-quarters of all AIDS deaths occurred there in 2007. And women and girls are unfortunately well-represented in this hellish fraternity—they make up almost 60 percent of adults living with HIV in this region.1

How HIV and Gender-Based Violence Are Connected

The link between HIV and gender-based violence has already been shown. Studies from Rwanda, Tanzania, and South Africa indicate that the risk for HIV among women who have experienced violence may be up to three times higher than among those who have not.2 Violence not only increases the vulnerability of women and girls, making them afraid to ask partners to use a condom or to stop extramarital relationships, it can also prevent them from getting counseling and treatment.

And there is much evidence of violence against women in Uganda and Tanzania. According to a groundbreaking WHO Multi-Country Study published in 2005, an average of one in two women in Tanzania has ever experienced physical or sexual violence at the hands of a partner (41 percent of women in Dar es Salaam and 56 percent in the Mbeya district in the south).3

Working to Change a Social Norm

This “normalization of violence” is one of the things Raising Voices hopes to change with this film (see box). The name of the film, Sasa, is Kiswahili for “now.” But it also is an acronym described in the screening guide that accompanies the film to promote cultural change:

How SASA Is Being Used to Promote Cultural Change

Lori Michau, co-producer of the film and co-director of Raising Voices, says that she hopes the film will help people see and understand the link between violence against women and HIV/AIDS. “This is still a very new idea to many people and we created the film to raise awareness about the connection.” For women living with violence, the film demonstrates that even HIV-positive women who have experienced violence can still do much to raise awareness, help others, and take action to prevent violence in other women’s lives.

Community support, in particular, offers hope that violence as a social norm can be changed. The film features many people who are working to change the role of women, the acceptance of violence, and the spread of AIDS. They include a female AIDS activist and a male teacher from Tanzania as well as a female member of Parliament and a religious leader from Uganda. All of them are working to change the social dynamic that accepts violence against women as “normal” and that leads the way to increased HIV infection levels.

Community support transformed Mama Joyce and Josephine’s stories from tragedy to triumph.  After losing her husband and his second wife to AIDS, Mama Joyce was initially afraid to go for HIV testing. After attending a seminar given by a local NGO, Kivulini Women’s Rights Organization, she decided to become a community educator and to learn her HIV status. Joyce now visits neighbors with AIDS and leads group discussions. She is raising her children in a nonviolent household, teaching them that violence does not solve problems. She says, “My life is good now. This work of mine makes me very happy. Now I know that I am valued in my community.”

Josephine, who spent months bedridden with an AIDS-related illness, has now remarried. Her new husband, Charles, speaks with regret in the film about how he was violent with his previous wife when he discovered that they were HIV positive. When Chevannes visited Josephine and Charles’ home, she was impressed that they are now living in an equitable, nonviolent relationship. “They discuss important issues like finances and sex, cook together,” she says, “and are active in community education work and in AIDS support services.”

Josephine now works as an “aromatherapy assistant” and gives massages to other HIV-positive members of the community when no one else—not even family members—will touch them. In fact, in one of the most poignant scenes, Josephine massages an HIV-positive woman who has skin lesions all over her back. “The way you touch that person, it strengthens her heart and gives her hope,” she says.

“I am strong in my heart,” Josephine says. “I feel I have power.”