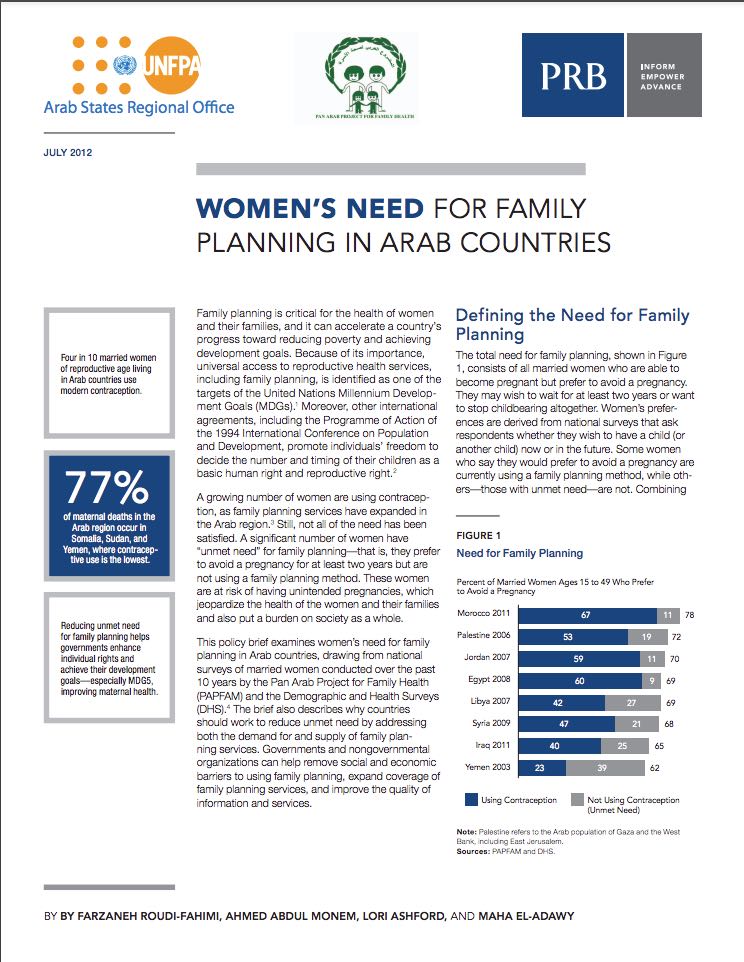 Family planning is critical for the health of women and their families, and it can accelerate a country’s progress toward reducing poverty and achieving development goals. Because of its importance, universal access to reproductive health services, including family planning, is identified as one of the targets of the United Nations Millennium Development Goals (MDGs).1 Moreover, other international agreements, including the Programme of Action of the 1994 International Conference on Population and Development, promote individuals’ freedom to decide the number and timing of their children as a basic human right and reproductive right.2

A growing number of women are using contraception, as family planning services have expanded in the Arab region.3 Still, not all of the need has been satisfied. A significant number of women have “unmet need” for family planning—that is, they prefer to avoid a pregnancy for at least two years but are not using a family planning method. These women are at risk of having unintended pregnancies, which jeopardize the health of the women and their families and also put a burden on society as a whole.

This policy brief examines women’s need for family planning in Arab countries, drawing from national surveys of married women conducted over the past 10 years by the Pan Arab Project for Family Health (PAPFAM) and the Demographic and Health Surveys (DHS).4 The brief also describes why countries should work to reduce unmet need by addressing both the demand for and supply of family planning services. Governments and nongovernmental organizations can help remove social and economic barriers to using family planning, expand coverage of family planning services, and improve the quality of information and services.

Defining the Need for Family Planning

The total need for family planning, shown in the figure, consists of all married women who are able to become pregnant but prefer to avoid a pregnancy. They may wish to wait for at least two years or want to stop childbearing altogether. Women’s preferences are derived from national surveys that ask respondents whether they wish to have a child (or another child) now or in the future. Some women who say they would prefer to avoid a pregnancy are currently using a family planning method, while others—those with unmet need—are not. Combining these groups of women is useful for program planners because it estimates the size of the “market” for family planning—that is, what the need for contraception would be if all married women acted on their stated preferences.5

Note: Palestine refers to the Arab population of Gaza and the West Bank, including East Jerusalem.
Source: PAPFAM and DHS.

Globally, women who want to avoid pregnancy but are not using an effective method of contraception account for 82 percent of unintended pregnancies.6 Unintended pregnancies are widespread in the Arab region, placing a burden on individuals, families, health systems, and socioeconomic development.7