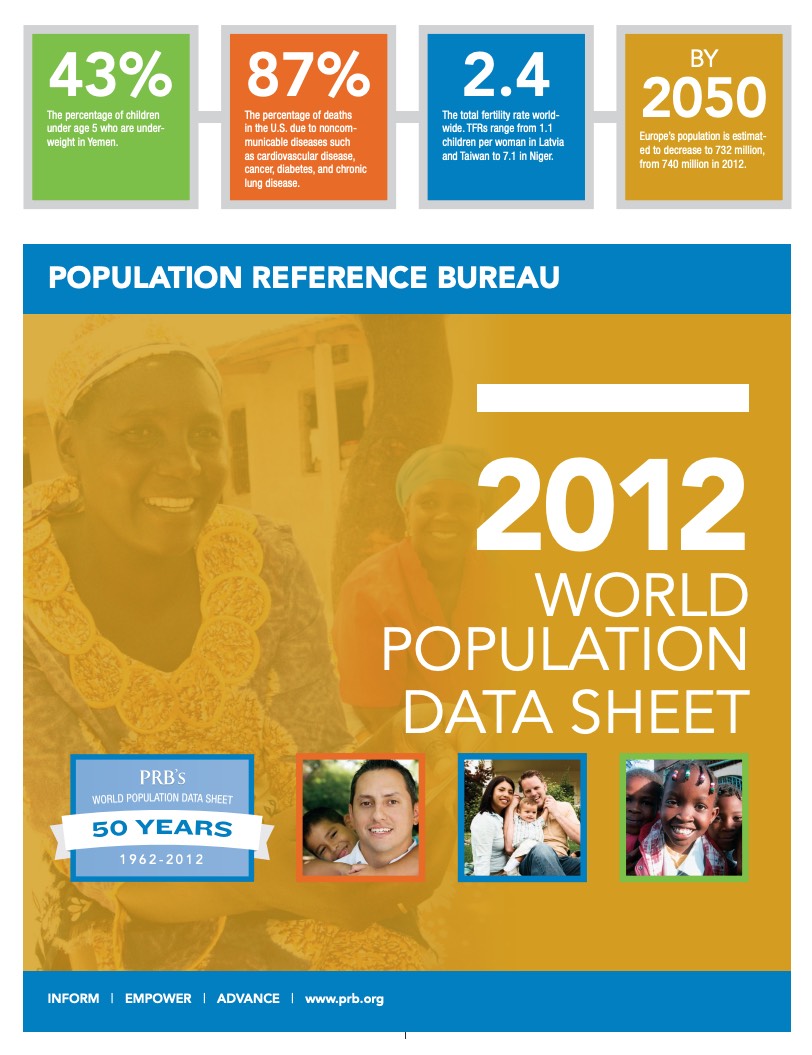 Nearly all future population growth will be in the world’s less developed countries, and the poorest of these countries will see the greatest percentage increase.

In contrast, developed countries as a whole will experience little or no population growth in this century, and much of that growth will be from immigration from less developed countries. Europe is likely to be the first region in history to see long-term population decline, largely as a result of low fertility in Eastern Europe and Russia. Europe’s population is projected to decrease from 740 million today to 732 million by 2050.

“World population reached 7 billion in 2011, and now totals almost 7.1 billion,” says Wendy Baldwin, president and CEO of PRB. “The developing countries in Africa, Asia, and Latin America account for 97 percent of this growth because of the dual effects of continued high birth rates and young populations.”

These new PRB publications offer detailed information on 19 population, health, and environment indicators for more than 200 countries. The data sheet clearly illustrates a continuing rapid expansion in world population. Even though declines in birth rates have been virtually universal across countries, some countries have shown little if any decline, such as Mali and Niger.

“Declines in birth rates continue to vary widely among regions, and within countries in a particular region,” says Carl Haub, PRB senior demographer and co-author of the data sheet. There are 25 countries in Africa where women have five or more children each. “In Malawi, for example, women average 5.7 children,” he explains. “But the poorest fifth of the population averages 7 children per woman, while the richest fifth averages fewer than 4 children per woman.” In contrast, women in South Africa average 2.4 children.

The 2012 World Population Data Sheet shows clear contrasts between less developed and more developed countries—”the demographic divide.” Tanzania and Spain have about the same population size today: Tanzania at 48 million and Spain at 46 million. Tanzania has a youthful population, with 45 percent of Tanzanians under age 15. In contrast, Spain has only 15 percent of its population under age 15. Projections to 2050 for population ages 65 and older show an even larger divide: Tanzania’s older population will change only slightly, from 3 percent now to 4 percent in 2050. But Spain’s population ages 65+ will nearly double, from 17 percent in 2012 to 33 percent in 2050.

OTHER HIGHLIGHTS FROM THE 2012 WORLD POPULATION DATA SHEET: