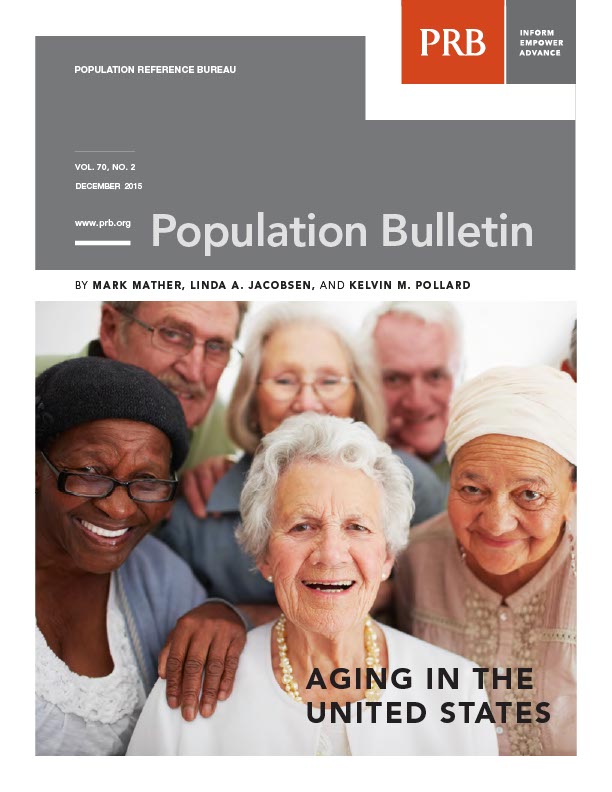 Population Bulletin, vol. 70, no. 2. Aging in the United States

The current growth of the population ages 65 and older is one of the most significant demographic trends in the history of the United States. Baby boomers—those born between 1946 and 1964—have brought both challenges and opportunities to the economy, infrastructure, and institutions as they have passed through each major stage of life. Although U.S. policymakers and others have had many decades to plan for the inevitable aging of the baby boom cohort, it is not clear that sufficient preparations have been made to meet baby boomers’ anticipated needs in old age.

The aging of the baby boom generation could fuel a 75 percent increase in the number of Americans ages 65 and older requiring nursing home care, to about 2.3 million in 2030 from 1.3 million in 2010, the Population Reference Bureau (PRB) projects in a new report.

The report, “Aging in the United States,” examines recent trends and disparities among adults ages 65 and older, and how baby boomers will reshape America’s older population. In 2016, baby boomers will be between ages 52 and 70.

The report notes that the number of Americans ages 65 and older is on course to more than double from 46 million today to over 98 million by 2060, while the 65-and-older age group’s share of the total population will rise to nearly 24 percent from 15 percent.

PRB observes that baby boomers are living longer than previous generations. They also have, on average, higher levels of education and more work experience, which bode well for their economic security in old age.

“The growth in the older population is fundamentally a success story from a public health perspective—new advances in medicine and living standards have led to longer life expectancies,” says Mark Mather, associate vice president for U.S. programs at PRB and principal author of the new report.

But potential problem areas are coming into focus:

Obesity rates among older adults have been increasing, standing at about 40 percent of 65-to-74-year-olds in 2009-2012, and putting more people at risk of chronic disease and disability (see image below). 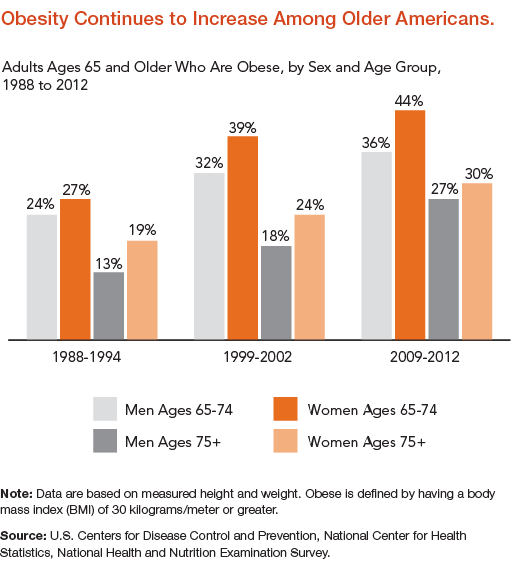 More older adults are divorced compared with previous generations. The share of divorced women ages 65 and older increased from 3 percent in 1980 to 13 percent in 2015, and for men from 4 percent to 11 percent during the same period. The rise in divorce, single-parent families, and “blended families” that include children from previous relationships may lead to weaker family ties and less caregiving support for aging spouses and parents.

There are also wide economic gaps between older adults in different racial/ethnic groups. While just 8 percent of non-Hispanic whites ages 65 and older lived in poverty in 2014, the comparable figure for Latinos was 18 percent, and for African Americans, it was 19 percent.

In addition to the rising need for nursing home slots, demand for elder care will also be fueled by a steep rise in the number of Americans living with Alzheimer’s disease, which could nearly triple by 2050 to 14 million, from 5 million in 2013.

The large share of elderly also means that Social Security and Medicare expenditures will increase from a combined 8 percent of gross domestic product today to 12 percent by 2050. “These challenges could be managed through structural changes to existing entitlement programs, an increase in retirement savings among workers, and by providing incentives to shift retirement to later ages,” Mather says.