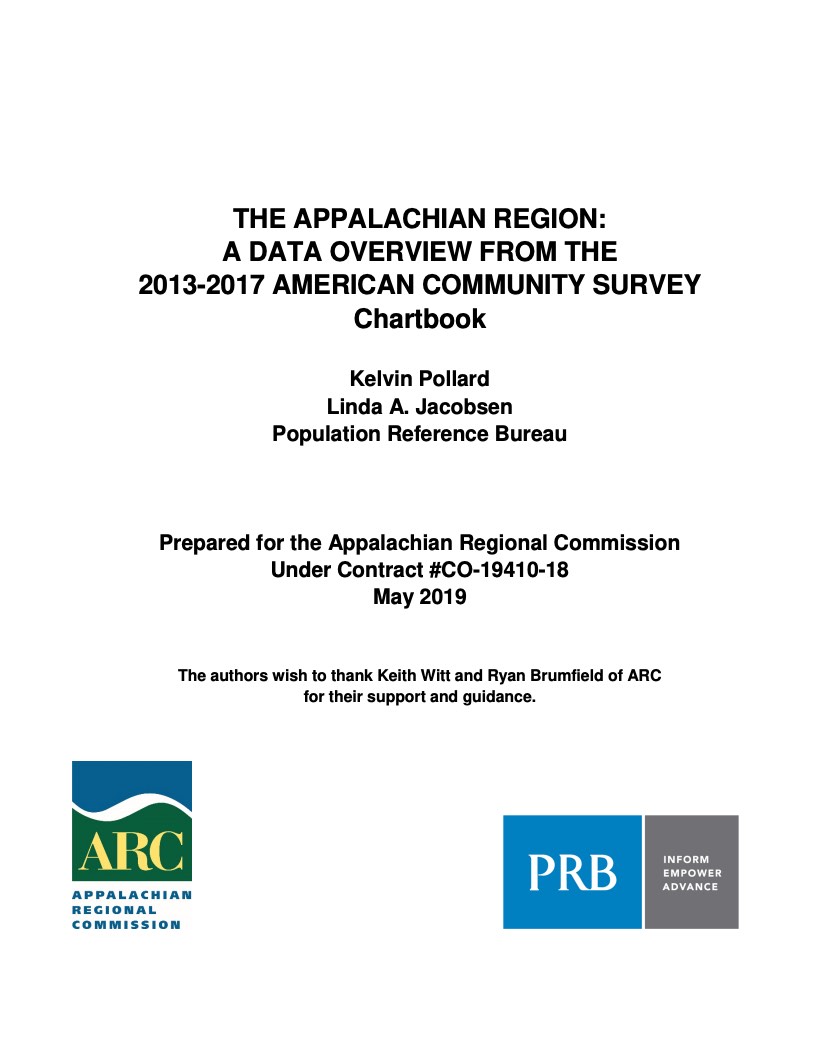 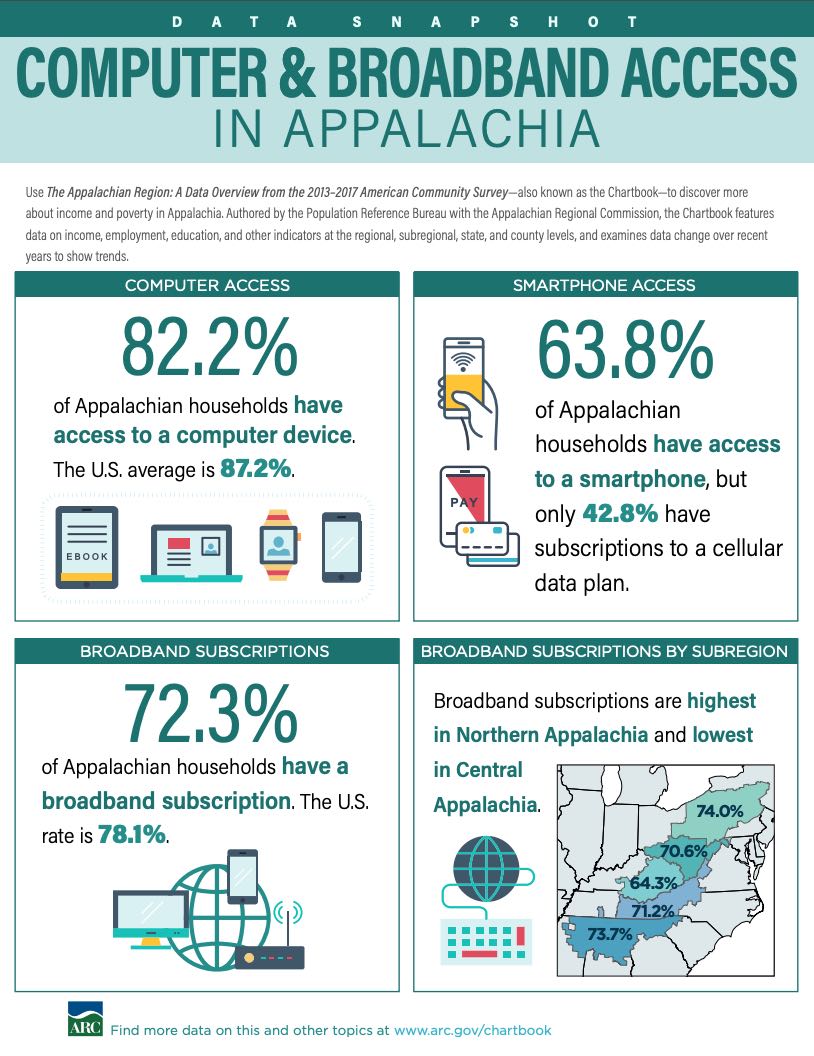 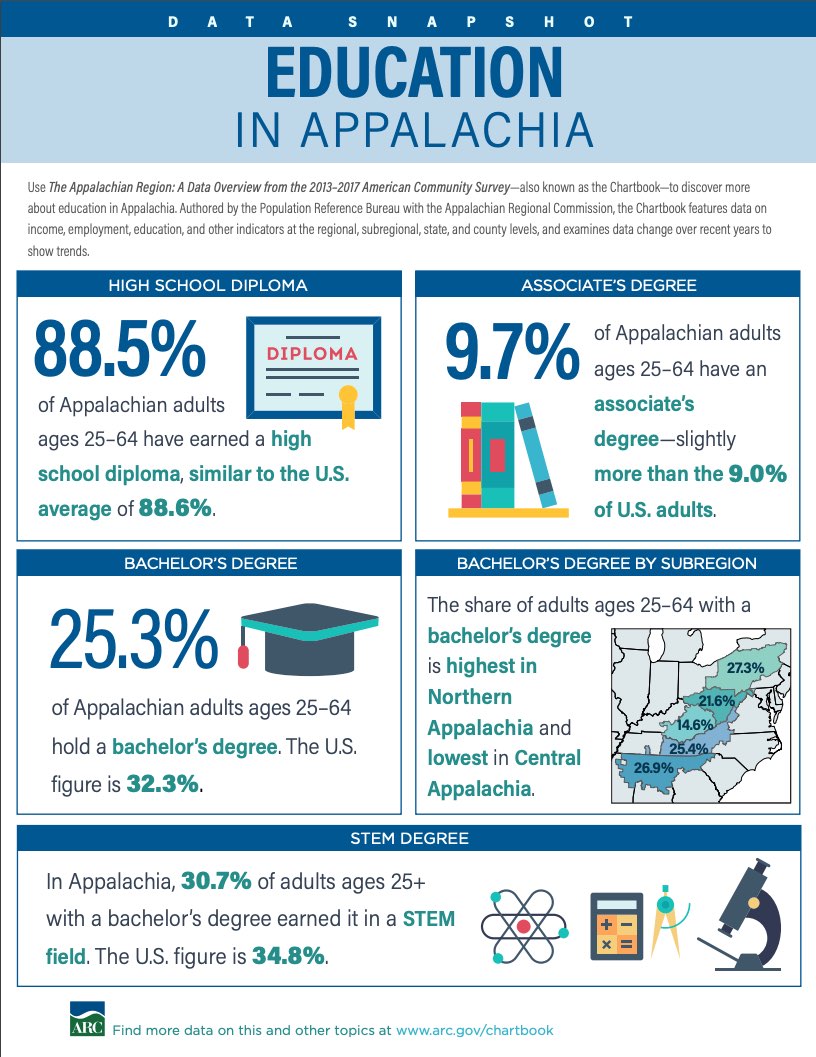 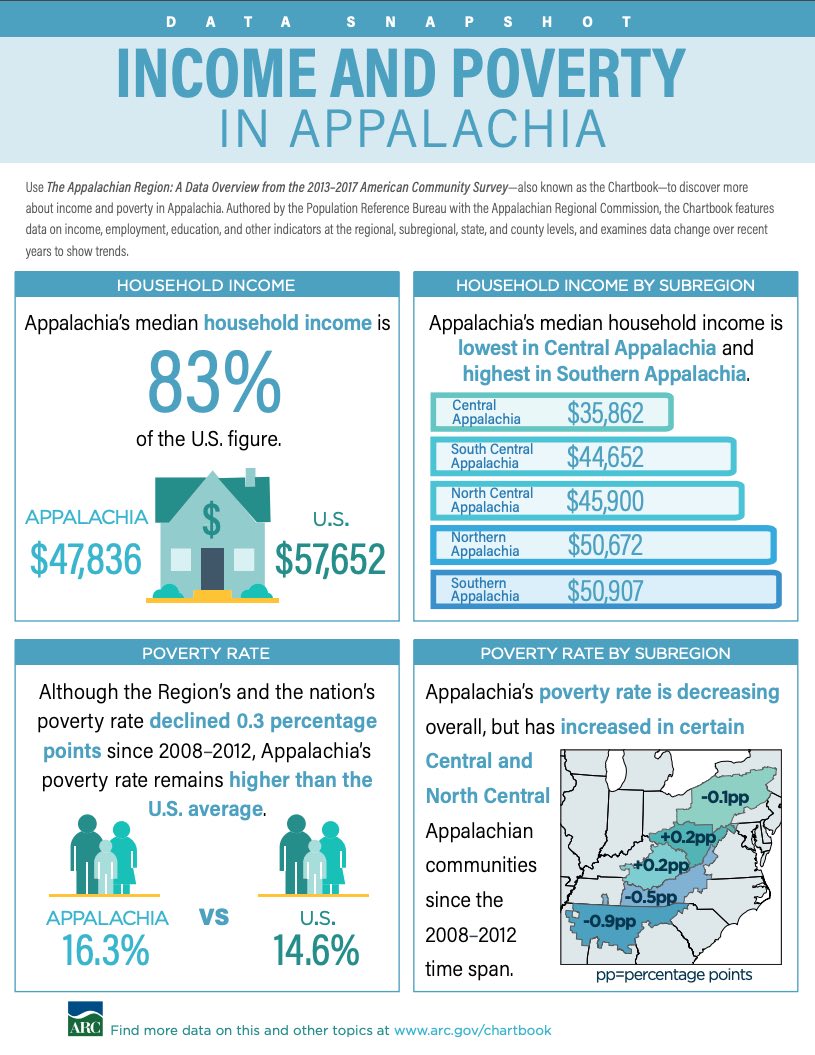 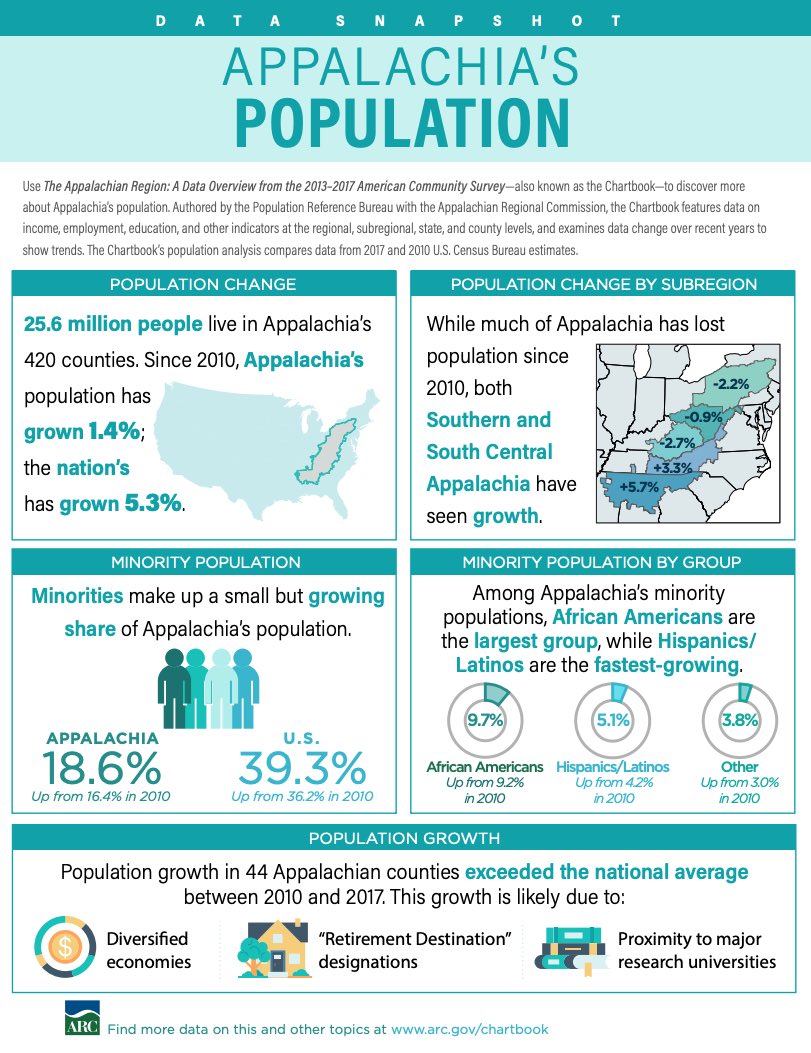 As Schools Close in Response to the Coronavirus, Children in Rural Appalachia May Have Less Access to Tools for Remote Learning.

“Now that computer devices are commonly used for school work, entertainment, online banking, health care access, and connecting with friends and family, our report suggests that many Appalachian residents are at a disadvantage,” says Kelvin Pollard, PRB senior demographer and co-author of The Appalachian Region: A Data Overview From the 2013-2017 American Community Survey.

The share of Appalachian households with a computer device (desktop, laptop, smartphone, tablet, or other device) in 2013-2017 was five percentage points below the national average (82 percent compared with 87 percent), the report shows. Device ownership in many of the Region’s urban counties was near or above the national average, but levels in many rural counties were far lower. In 127 of Appalachia’s 420 counties less than 75 percent of households had a computer device, with the vast majority concentrated outside metropolitan areas and a sizeable share in Central Appalachia (eastern Kentucky, plus adjacent counties in West Virginia, Virginia, and Tennessee).

The Appalachian Region encompasses 205,000 square miles along the Appalachian Mountains from southern New York to northern Mississippi, including portions of 12 states and all of West Virginia. The Region includes Pittsburgh, Birmingham, and parts of metropolitan Atlanta and Cincinnati.

During the 2013-2017 period, 72 percent of Appalachian households had a broadband internet subscription, roughly six percentage points below the national average. But in 80 of the Region’s counties, the share was less than 60 percent (see Figure).

“Given that high-speed internet access is credited with enhancing economic growth and development, these are signs that many communities in the Region may be at risk of being left behind,” Pollard warns. 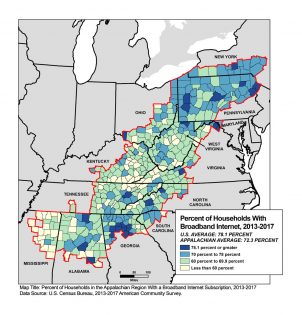 The report shows that while working-age adults in Appalachia are nearly as likely to have completed high school as Americans in general, they are significantly less likely to have completed at least four years of college. Just over 25 percent of Appalachia’s working-age population had a four-year degree or more in 2013-2017—seven percentage points lower than the U.S. average of 32 percent. And the rate was less than 20 percent in both Central Appalachia and the Region’s most rural counties.

Nearly three-fourths (73 percent) of Appalachia’s prime working-age adults were in the labor force in 2013-2017, which is almost five percentage points lower than in the United States as a whole. But this share was much lower in 53 counties (38 of which were in Central Appalachia) where less than 60 percent of adults ages 25 to 64 were in the labor force.

Although labor force participation rates were slightly lower in the Region, the unemployment rate matched the national average of 5.4 percent. Yet 17 counties—down from 37 in 2012-2016—had unemployment rates of 10 percent or higher. All of these counties were outside metropolitan areas, and roughly half were in Central Appalachia where the unemployment rate was 7.3 percent. “These unemployment levels also appear to be connected to educational attainment,” suggests Jacobsen.

“These uneven patterns suggest that the pace of economic recovery since the Great Recession has varied across the Region, but the counties that saw increases in median household income are also those with higher levels of education and labor force participation, and lower levels of unemployment,” Jacobsen reports.