A new publication from the National Academies of Sciences, Engineering, and Medicine identifies eight key demographic trends shaping the rapidly growing U.S. population ages 65 and older—projected to nearly double from 51 million in 2017 to 95 million by 2060.

The publication, Future Directions for the Demography of Aging, reflects the perspectives of nearly two dozen National Institute on Aging-supported researchers who examine recent demographic shifts along with “positive changes and disquieting trends.” They also explore research and policies that could improve health and well-being among older adults in the United States.

Average U.S. life expectancy at birth increased steadily from 1950 to 2014, in large part reflecting a reduction in mortality at older ages (see Figure 1). Slight declines in life expectancy since 2014 reflect increases in most major causes of death, with women experiencing more deterioration related to chronic diseases (such as heart disease, diabetes, Alzheimer’s disease) than men, reports Eileen Crimmins of the University of Southern California. Opioid deaths, which occur at relatively young ages, have also contributed to overall trends.

Research shows that the gender gap in U.S. life expectancy is narrowing, and the gap between blacks and whites has shrunk somewhat. But much of the gains in life expectancy are concentrated among the most educated Americans, and large regional differences persist, Crimmins points out. Optimizing the health of the U.S. older population may depend less on medical progress and more on policies that reduce socioeconomic, racial, and geographic differences in health care access, she argues.

Between 2017 and 2060, the share of the older population that is non-Hispanic white is projected to drop by 22 percentage points, from 77 percent to 55 percent (see Figure 2).

As the older population becomes increasingly more diverse, racial/ethnic health disparities will play a greater role in shaping the overall health of the U.S. older population, report Robert A. Hummer and Iliya Gutin of the University of North Carolina at Chapel Hill. Asian Americans tend to have the best health profiles, followed closely by non-Hispanic whites. A substantial health gap separates Asian Americans and non-Hispanic whites from blacks, Hispanics, and Native Americans, who tend to fare worse on a range of health indicators. Racial/ethnic disparities in health are typically more pronounced among women than men.

3. Socioeconomic-related disparities in health and mortality are sharp and widening.

People with a college degree or more have the best health and live the longest, while those with less than a high school diploma have the worst health and live shorter lives, Angela M. O’Rand and Scott M. Lynch of Duke University report. The differences increase by education level; the widest difference in life expectancy gains and losses are between college graduates and those without high school degrees (see Figure 3). Whites tend to have more pronounced differences by education level than blacks.

A large body of research finds that health and mortality differences in older adulthood are closely related to socioeconomic conditions and health in childhood, O’Rand and Lynch report. Evidence is building that the health and well-being of the older population reflects the cumulative effects of socioeconomic conditions over the entire life course. Understanding the ways that disadvantage in childhood “gets under the skin” and influences health and mortality in old age can help policymakers identify early investments (for example, in nutrition and education) and other interventions that can improve health in old age.

Rural areas have the highest concentration of older people and are aging faster than urban areas, report Kathleen Cagney of the University of Chicago and Erin York Cornwell of Cornell University. The median age in rural areas is 51 compared with 45 in urban areas. Older people living in rural locations may have access to fewer health care services and face longer travel times to obtain care.

In metropolitan areas, suburban counties are aging more rapidly than urban counties (see Figure 4). Suburbs tend to share characteristics that make aging in place challenging, such as limited public transportation, businesses clustered rather than dispersed, and single-family two-story homes, which can be difficult for aging adults to maintain and navigate. Many suburban areas are also experiencing declining infrastructure and rising poverty.

Analysis of data from the National Social Life, Health, and Aging Project shows that living in a disadvantaged area is related to poor health even when other factors are taken into account, Cagney and York Cornwell report. People in neighborhoods with a greater share of low-income residents or housing in disrepair; more crime, litter, odor, or noise; or limited social ties among residents tend to have more depressive symptoms. New forms of data can help policymakers and planners understand the impact of location on people’s health in old age. For example, data on crime, potholes, and even rat sightings can now be linked to measures of health and well-being.

5. The pool of traditional family caregivers for older Americans is shrinking.

Spouses and adult children provide most of the care that enables older people to live independently and avoid costly nursing homes. But declines in marriage, increases in divorce, and lower fertility mean that more baby boomers will reach age 65 without a spouse or adult child to rely on for care, reports Emily M. Agree of Johns Hopkins University (see Figure 5). Divorce and remarriage are associated with “less contact, less support, and poorer quality relationships” among parents and adult children than long-term intact marriages, studies show. Adult children feel less obliged to care for elderly stepparents or fathers with whom they did not reside during childhood. 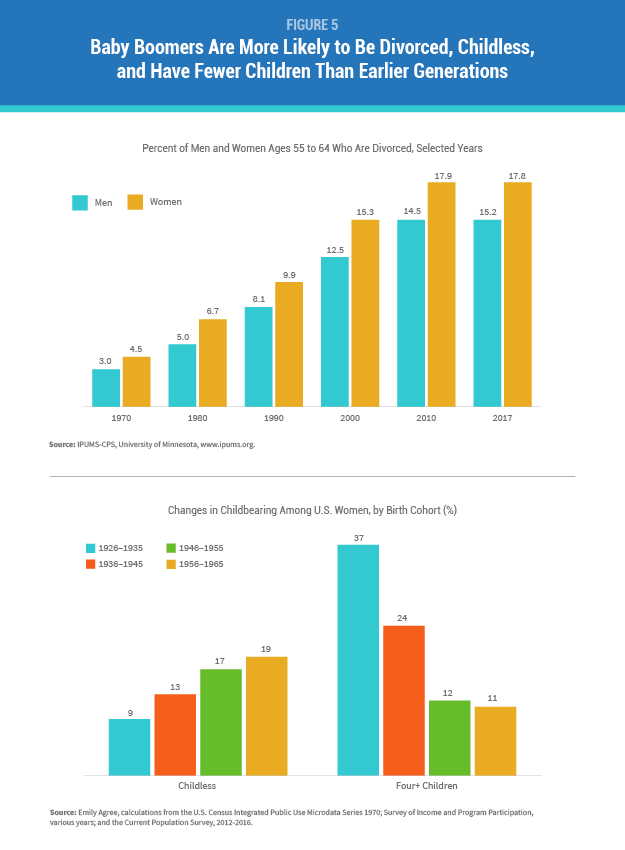 Agree recommends that research and policies related to family caregiving focus on the emerging roles of siblings, friends, cohabiting partners, and more distant relatives. Lower-income older adults are especially vulnerable, not only because they are more likely to have unstable and varied partnerships, but also because they often serve as primary caregivers for grandchildren, she argues.

Labor force participation rates have risen for both men and women over the past 20 years (see Figure 6). According to Courtney C. Coile of Wellesley College, primary drivers of this trend include:

At the same time, more U.S. workers are leaving the workforce early using Social Security disability insurance (DI). About 16 percent of U.S. workers received DI before they were eligible for Social Security benefits in 2016, up from 11 percent among working men and 8 percent among working women in 1980, Coile estimates based on Social Security Administration data. Changes in medical eligibility criteria, women’s labor force participation, and economic factors—rather than increases in disability levels—primarily explain this trend, she reports.

Evidence shows many older workers are now retiring gradually, switching to a different job, part-time work, or self-employment, according to Coile. Blacks, Hispanics, and those with lower levels of education are less likely to be working at older ages than their white or more-educated peers.

Researchers and policymakers should focus on the experience of those with less education who are “known to retire earlier, have shorter life expectancies, and be more likely to use DI,” Coile argues. Changes to Social Security and other programs that create incentives to work longer may have unanticipated impacts on the well-being of those unable to continue working.

7. The number of older Americans living with one or more disabilities is projected to increase.

As a group, the baby boom generation is better educated than previous generations but has higher rates of obesity and mobility-related impairments, reports Vicki Freedman of the University of Michigan. The likelihood of disability increases with age: The National Health and Aging Trends Study (NHATS) shows that just over 20 percent of adults ages 65 to 69 have either poor capacity (physical limitations, poor vision, poor hearing, or probable dementia), while more than 80 percent have poor capacity by age 90 (see Figure 7).

A growing share of older adults—roughly one in four—successfully accommodates losses in physical capacity and continues to carry out daily activities without difficulty or help from others by using assistive devices such as canes, walkers, and grab bars, NHATS data show. Behavioral changes such as using devices or modifying the physical environment can determine whether living longer also means remaining independent longer, Freedman points out.

Older minority women are especially disadvantaged, however. They are less likely to successfully accommodate their limitations by using assistive devices and are two to three times more likely than non-Hispanic white women to receive assistance with self-care, mobility, or household activities, Freedman’s analysis of NHATS data finds. Better understanding of late-life disablement can help policymakers identify public health interventions that can maximize independent function, extend quality of life, and minimize nursing home use.

8. Declines in the share of older Americans with dementia may be threatened by high rates of obesity and diabetes.

The share of the older population with dementia has fallen over the past two decades. This downward trend is likely the result of better brain health related to higher levels of education, suggests analysis of the U.S. Health and Retirement Study and other studies (see Figure 8).

Researchers question whether dementia prevalence can continue to decline in tandem with high rates of obesity and diabetes, which are both cardiovascular risk factors for dementia. A complex set of factors influence a person’s likelihood of developing dementia, including genetics, early-life environment and education, and features of late-life settings such as cognitive stimulation and social networks, reports Kenneth M. Langa of the University of Michigan.

Research has identified large and growing disparities in dementia risk by socioeconomic status and race/ethnicity, which could slow progress in cutting dementia levels, Langa notes. A better understanding of the causes of the recent decrease in dementia prevalence can help shape interventions that could contribute to further declines, with tremendous implications for older Americans, their families, and the costs of public programs. Policies that address growing disparities in dementia risk by ensuring equity of access to the resources and environments that contribute to healthy cognitive function are crucial to the overall health of the U.S. older population, he argues. 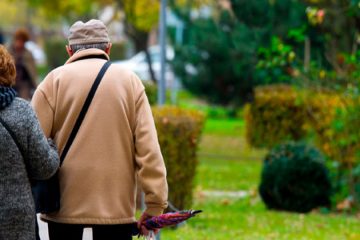 How Neighborhoods Affect the Health and Well-Being of Older Americans