Smoking and obesity are the two leading causes of preventable death, disability, and chronic disease in the United States. New research shows that eliminating them could go a long way in reducing racial health gaps. But location also plays a key role in health disparities, with neighborhood setting and state-level policies shaping residents’ health, this new study and another suggest.1

“We know that, compared to white peers, black men and women enjoy fewer years of life expectancy and healthy life expectancy, which is the number of years individuals can expect to live without disability. Meanwhile, immigrant- and U.S.-born Hispanics live longer than U.S.-born whites, despite their ethnic minority and lower socioeconomic status,” says Michelle Frisco of Penn State University, who conducted the first study with her Penn State colleague Jennifer Van Hook and Robert Hummer of the University of North Carolina, Chapel Hill. Their research was supported by the Eunice Kennedy Shriver National Institute of Child Health and Human Development (NICHD).

The researchers wanted to explore how obesity and smoking contributed to these differences because both health problems are concentrated in some groups in ways that are likely to produce health disparities. For example, white men and women smoke more than Hispanic immigrants, and black women are more likely to be obese and have a tougher time quitting smoking than white women.

Eliminating Smoking and Obesity Would Reduce the Black-White Health Gap

The research team analyzed data on health and mortality from almost 20,000 U.S.-born white, black, Hispanic, and foreign-born Hispanic men and women from the National Health and Nutrition Examination Survey. They focused on life expectancy and years spent disability-free for each racial or ethnic group. They then simulated how many years each group could expect to live overall and disability-free if no one ever smoked or was obese. Their findings showed some striking reductions in group differences.

“The actual disparity in the life expectancy between white and black women in the U.S. is approximately two years,” Frisco reports. “When we simulated the elimination of smoking and obesity, that gap was reduced to three months. Nearly every significant group difference was reduced to the point that gaps between groups were no longer statistically significant.”

There was one exception: Foreign-born Hispanic men and women retained their nearly three-year life-expectancy advantage over white peers even when the simulation eliminated both obesity and smoking.

“Hispanic immigrants typically have a longer life expectancy than whites to begin with. Eliminating obesity and smoking did not change this,” says Frisco. Not only do Hispanic immigrants smoke less than their U.S.-born peers, they are more likely to eat diets healthier than the typical American diet and live in tight-knit communities with widespread social support. They are also less likely to have substance abuse disorders, according to the researchers. In addition, they report that Hispanics who migrate to the United States tend to be healthier than their counterparts who remain in their country of origin.

The findings suggest that interventions aimed at preventing obesity and weight gain, reducing smoking, and increasing smoking cessation could be more effective if they’re tailored to specific populations. However, the researchers noted that these programs shouldn’t blame the victim by focusing only on individual behavior.

“We know that the places where people live influence smoking and obesity. For example, segregation leads U.S. black men and women to have elevated risks of long-term smoking and obesity in part because of the ways that tobacco companies disproportionately target minority neighborhoods, as do fast food restaurants and corporations who sell soda. These and other forms of structural racism must be addressed if we want to ensure greater health equity in the U.S.,” Frisco says.

Some states invest more heavily in the health and well-being of their people, and these investments have “disproportionate consequences” for people with low education and income levels, Mark Hayward of the University of Texas at Austin, Jennifer Montez of Syracuse University, and Anna Zajacova of Western University show in the second study.

American adults with less education tend to report more chronic diseases and disabilities, and die sooner than those with more education, and these disparities have widened in recent decades, according to Hayward.

While more-educated people usually have higher incomes and less physically demanding jobs than less-educated people, the dynamics are more complicated than that, he explains. Blaming lifestyle differences between the two groups neglects the economic and social contexts where people live, he says.

A college education acts as a ‘personal firewall,’ protecting a person wherever they live.

They found that the health gap between more- and less-educated people varies widely among states. The size of that gap is mainly related to the health levels of adults with less education.

A college education acts as a “personal firewall,” protecting a person wherever they live, Hayward suggests. “Well-educated persons have better access and support for healthy lifestyles and care, good jobs and rewards, and valuable networks and relationships, and they have sophisticated cognitive skills and a greater sense of control and human agency,” he says. By contrast, less-educated people are more vulnerable to differences in state policies and programs “precisely because they have fewer personal resources and are exposed to greater risks.”

The researchers point to Massachusetts and Mississippi to illustrate the wide differences in state-related policies affecting health. Unlike Massachusetts, Mississippi does not supplement the Earned Income Tax Credit that benefits working poor families, did not expand state Medicaid coverage following the 2010 Affordable Care Act, and has limited cigarette sales taxes.

Policies among the 50 U.S. states began to diverge in the 1970s with devolution—national policy changes that allowed states to opt out of federal programs and gave them more discretion over the services they offered.

The five states with the largest increases in cigarette excise taxes between 1990 and 2014 saw smoking prevalence differences between less- and more-educated adults shrink by two-thirds—from an 11.2 percentage-point gap to a 3.8 percentage-point gap. But the gap nearly doubled in the five states with the smallest increases in state cigarette excise taxes, from a difference of 8.4 percentage points to 16.1 percentage points.

How Can We Close the Health Gap?

When social safety nets are weak and investment in the well-being of their populations is low, states can exacerbate the health effects of low education, he suggests.

“States have become a major institutional force affecting incentives and capacities of residents to create healthy lives,” he says. This study on cigarette taxes and health is part of a growing body of research on the impact of state policy differences on health. Earlier studies by Hayward and colleagues show that state policies contribute to state-level differences in premature deaths and disability, particularly among less-educated women.3

This article was produced under a grant from the Eunice Kennedy Shriver National Institute of Child Health and Human Development (NICHD). The work of researchers from the following NICHD-funded population dynamics research centers was highlighted in this article: Penn State University, University of North Carolina at Chapel Hill, and University of Texas at Austin. 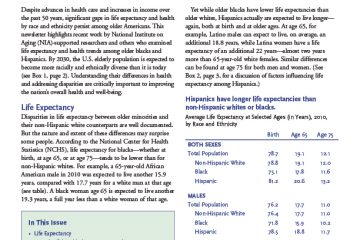 The Health and Life Expectancy of Older Blacks and Hispanics in the U.S. 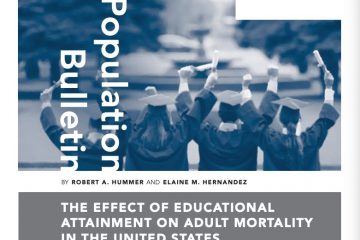 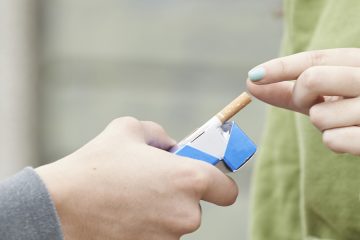