Declining mortality and fertility rates are transitioning Ethiopia toward an age structure that has the potential to provide significant economic benefit.

Some social and economic infrastructure investments already made by the Ethiopian government improve the chances of a demographic dividend from growth in the labor force as a share of the overall population. These investments have increased enrollment at all education levels and expanded health facilities, resulting in life expectancy extending from 47 years in the early 1990s to 64 years in 2015.1

While improved education and health outcomes are important preconditions for a demographic dividend, creating decent work opportunities for youth and reducing youth unemployment are also necessary. This article assesses two recent trends—unemployment among youth and sectoral redistribution of the labor force.

Low national unemployment rates are common in agrarian economies, and in Ethiopia 73 percent of the labor force is engaged in agricultural activities.3  However, in the case of Ethiopia, there is reason to believe that redundant labor is present in the rural sector that cannot be captured by the standard measure of unemployment. Ethiopia’s rural economy is largely characterized by disguised unemployment, with official figures on the rural unemployment rate misrepresenting the true picture of unemployment. A likely indication of disguised rural unemployment is the declining land-labor ratio—land under cultivation to the number of workers. This ratio declined in Ethiopia from 1.2 hectares per working age person in the early 1960s to 0.35 hectares per working age person in 2015.4 Although rural working-age Ethiopians may not be officially categorized as unemployed, given the declining land-labor ratio it is unlikely that they are engaged in productive agricultural work. Labor productivity in crop agriculture stood much lower than land productivity in 2015: seven quintals per labor unit in contrast to 22 quintals per hectare.5

Action is needed to address rural and urban youth unemployment in Ethiopia. In rural areas, the declining land-labor ratio and high rates of migration underline the need to expand education in rural areas and deepen its quality, to modernize the agricultural sector with better capabilities and harnessed water resources, to create employment opportunities in nonagricultural sectors that help transform the rural economy, and to facilitate a smooth rural-to-urban migration. In urban areas, vocational training programs might be offered for unemployed youth, particularly young women. Expansion of employment opportunities in the modern sector is also needed, particularly in urban centers and in manufacturing as well as technology-related services. Smooth rural-to-urban migration is dependent on decent and sustainable job creation for migrants.

Sectoral Redistribution of the Labor Force

Achievement of the demographic dividend depends not only on youth employment, but also on the types of jobs created. Some jobs have higher returns and are sustainable whereas others are short-lived or have lower returns. Redirecting youth labor to sectors that are sustainable and that yield higher returns could maximize the potential for a demographic dividend. Key in the process of structural transformation is shifting economic activities from predominantly subsistence sectors such as agriculture in rural areas and informal sectors in the urban centers to vibrant sectors such as manufacturing. This process can only be ensured through directing new labor market entrants (youth) to these select sectors. A case in point is employment created in the infrastructure sector in response to populist principles. Such infrastructure-related jobs may relieve youth unemployment temporarily. Nevertheless, the sustainability of these jobs is an issue. First, the infrastructure sector cannot perpetually create jobs, and second, if it did, the increase in these publicly-funded jobs would contribute to a rising cost of living. This typically happens because the returns to investments in infrastructure in the form of higher output in productive sectors are either sluggish or nonexistent. Moreover, jobs secured in the informal service sectors in urban and rural areas cannot fundamentally transform the Ethiopian economy.

At both the national and regional levels, a gradual shift in employment has taken place in Ethiopia, from agriculture to other sectors, particularly the service industry. Ethiopia’s huge investment in social and economic infrastructure has led to an increasing number of rural high school and college graduates who often are not interested in activities within the agricultural sector. Between 2005 and 2013, the share of the agricultural sector in the total national labor force decreased by 7.5 percent. The Southern Nations, Nationalities, and Peoples’ Region (SNNPR), Amhara, Harari, Oromia, and Tigray regional states all experienced a net decline in the agricultural sector’s share of their respective total labor force and three (Amhara, Oromia, and SNNPR) accounted for 6.4 percentage points, or 85 percent, of the total 7.5 percent reduction of the agricultural sector share (see Figure 1). 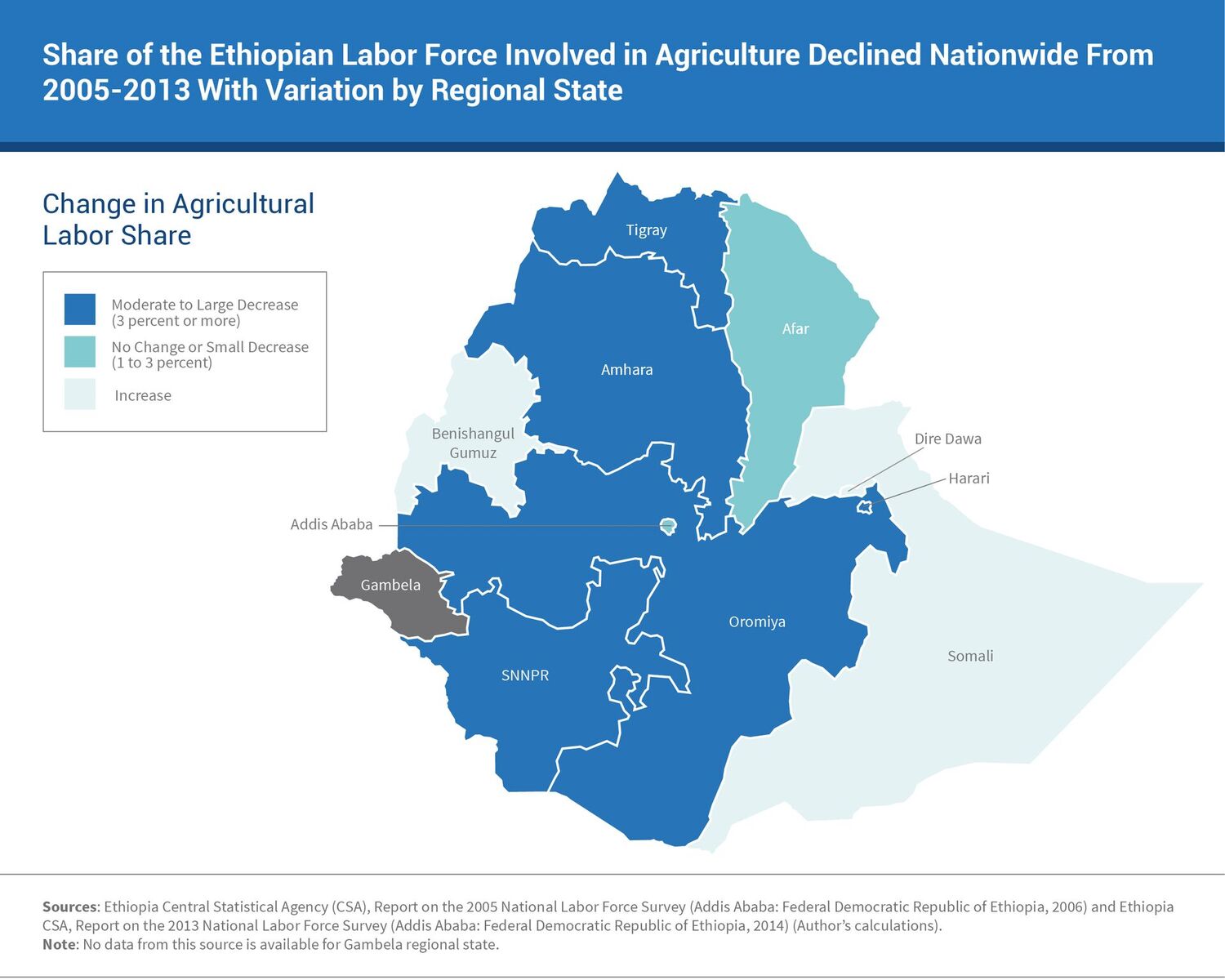 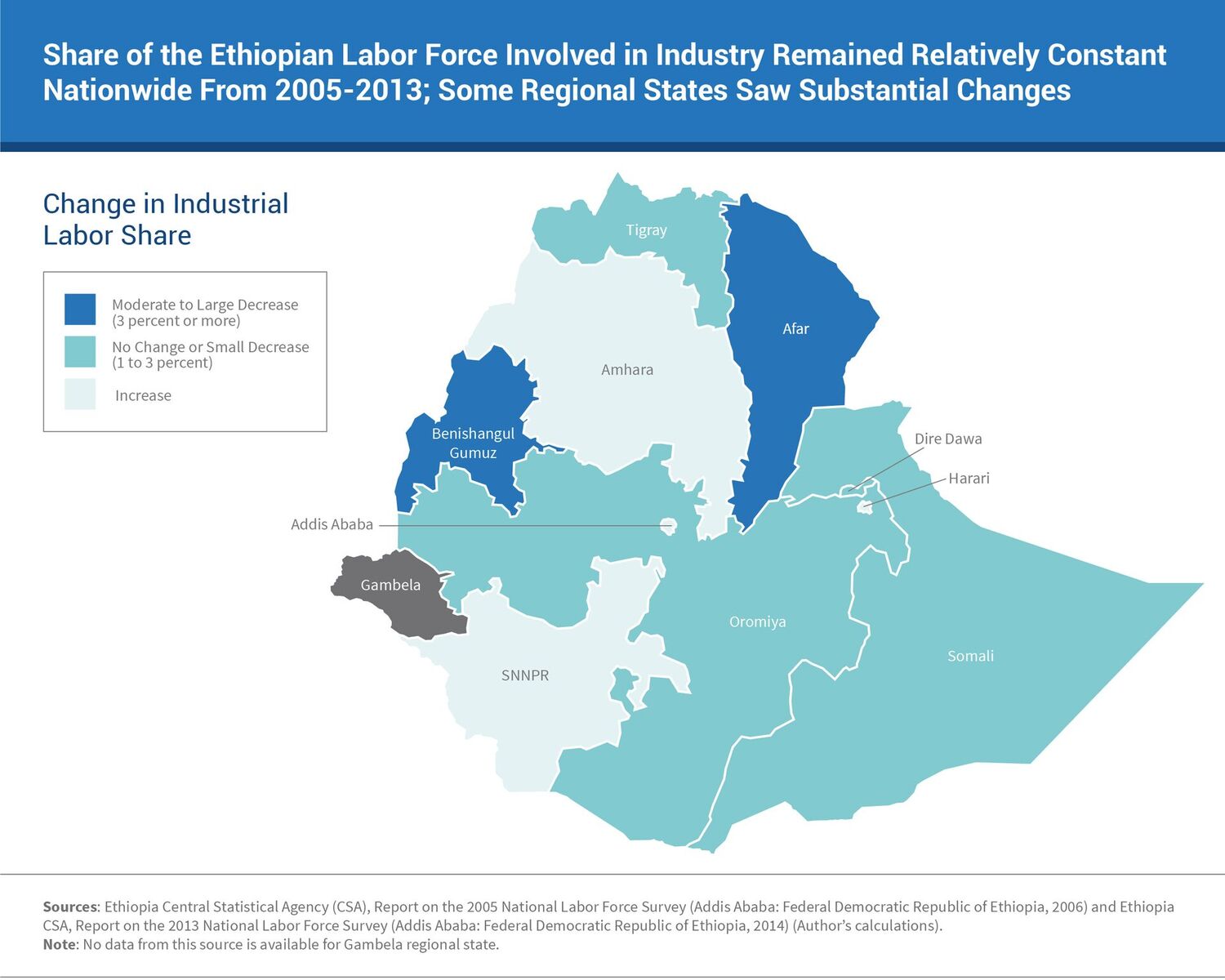 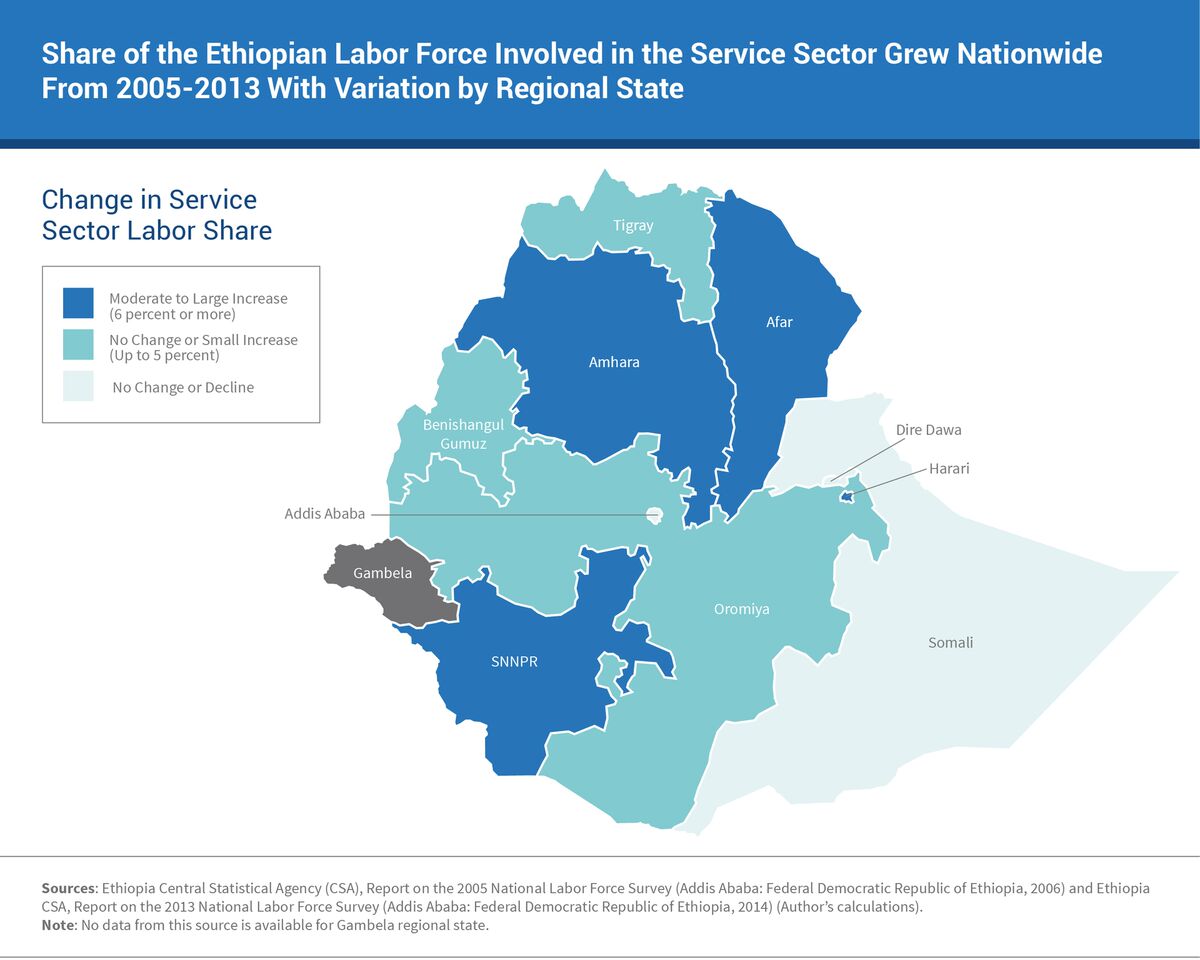 While the decrease in the agricultural sector’s share of the labor force is encouraging, it could be linked to several factors: transfer of labor to industrial (mainly manufacturing, construction, mining, and quarrying) and service sectors, migration abroad (usually to countries in the Middle East), increased school enrollment, and/or increased rural unemployment. Nonetheless, movement of labor to the industrial sector and to some subsectors of the service sector can be a sign of structural labor market change and readiness to benefit from the demographic dividend.

However, as shown in Figure 2, a nontrivial portion of the labor force moved to miscellaneous services (“other service activities”) such as arts, entertainment, and recreation, household activities with employed persons, and other services, increasing overall by 6.1 percent between 2005 and 2013. With the construction boom and expansion in social services, the construction, education, and health sectors also increased. By contrast, manufacturing decreased slightly. Since healthy and educated youth require decent and sustainable jobs through increased productivity, efforts at expanding jobs in the manufacturing and technology-related service sectors are critically important.

All regions, except Ethiopian Somali and Benishangul-Gumuz, have experienced a net labor force movement to the miscellaneous and mostly informal service sectors. The Ethiopian Somali and Benishangul-Gumuz regions and Dire Dawa city administration experienced increases in their agricultural sector labor share, and the manufacturing sector share marginally increased only in SNNPR and Addis Ababa and Dire Dawa city administrations. Such patterns hint at the relative intensity of economic activities in each region. For example, SNNPR and Addis Ababa city administration demonstrated relatively stronger performance in creating employment in the industrial sector while Oromia capitalized on its agricultural sector.

Despite two important positive developments—a low national unemployment rate and a decrease in the agricultural sector share of the national labor force—three gaps deserve serious attention in future policy considerations. First, the unemployment rate is still high in urban centers, particularly among the youth. Second, the labor force shift falls short of the structural change needed for a demographic dividend: More labor from agriculture and other primary sectors is moving to miscellaneous service sectors, while youth may be dropping out of school and migrating internationally. Third, national changes in sectoral distribution of labor are more or less similar in regional states and city administrations, warranting action at the subnational as well as national level. There appears to be an important pattern in Ethiopian demography: Urban populations are growing rapidly due to rural-to-urban migration. Without urgent action to create sustainable jobs in both urban and rural areas, urban poverty, urban unemployment, and urban crime could become pressing challenges in the near future. In parallel with continuing efforts to increase enrollments at all education levels, creating sustainable jobs in manufacturing and technology-related services and rewarding educational excellence are important to prepare the labor market to benefit from a demographic transition.