Despite improvements of overall HIV status in adults from 2005 to 2012, AIDS-related deaths increased by 50 percent among adolescents. AIDS was the second leading cause of death among youth across the world during this period, and was the leading cause of youth deaths in Sub-Saharan Africa.1 Of the 220,000 cases of HIV diagnosed in 2014, 17 percent were among those ages 15 to 19. Testing rates are very low in this age group, with only 33 percent of girls and 20 percent of boys seeking testing and receiving their results.2 This article examines the current situation with integrating youth into the Fast-Track Cities Initiative, a global goal to end AIDS by 2030, and provide recommendations for moving forward.

On December 1, 2014, the International Association of Providers of AIDS Care (IAPAC), the Joint United Nations Programme on HIV/AIDS (UNAIDS), the United Nations Human Settlements Programme (UN-Habitat), and the City of Paris met in Paris, France to discuss the AIDS epidemic.3 They outlined a set of goals to be met by 2020: 90 percent of people living with HIV (PLHIV) know their status, 90 percent of those who know their status are linked to care and receiving highly active antiretroviral therapy (HAART), and 90 percent of those on HAART are virally suppressed.

Many official documents have been released to educate the public about the progress cities have been making toward these goals, though most are focused on adults rather than children or adolescents. To reach these goals, policies and programs must address the special challenges youth face in accessing HIV services.

Stigma is the most common barrier to HIV testing and treatment scale up. Many countries, including those in sub-Saharan Africa, have deep-seated stigma associated with an HIV diagnosis and discrimination is quite commonplace.4 Stigma is especially prevalent among youth themselves, who are still developing, both mentally and socially, and find it difficult to seek help for sensitive issues such as sexual and reproductive health (SRH) services and HIV testing. Many providers do not know how to handle adolescents’ concerns, and may create a hostile environment that keeps patients from returning.5 Youth may be judged based on their age, socioeconomic status, race, or other factors that make it difficult to stay in care.

Lack of education is also a major barrier to testing services and fuels HIV transmission. Some schools may not often provide youth with sexual education or the programs do not incorporate HIV into their curriculums or are otherwise inadequate. Additionally, many youth leave school at the earliest opportunity to work or help support their families. Lack of education prevents youth from seeking HIV testing services, using or requesting the use of condoms, and staying in care once they receive their diagnosis.

Many low- and middle-income countries (LMICs) do not have the financial resources to ensure that all PLHIV have a lifetime supply of antiretrovirals (ARVs). It is estimated that the overall costs of testing and treating PLHIV globally will total $26.2 billion between 2015 and 2020.6 The majority of LMICs depend on the President’s Emergency Plan for AIDS Relief (PEPFAR) and other international funding, with 19 countries drawing 75 percent of their funding from outside sources and 5 countries—Nigeria, Rwanda, Democratic Republic of the Congo, Haiti, and Malawi—drawing 100 percent.7 The figure below shows the distribution of international funding for 36 low and middle income countries. 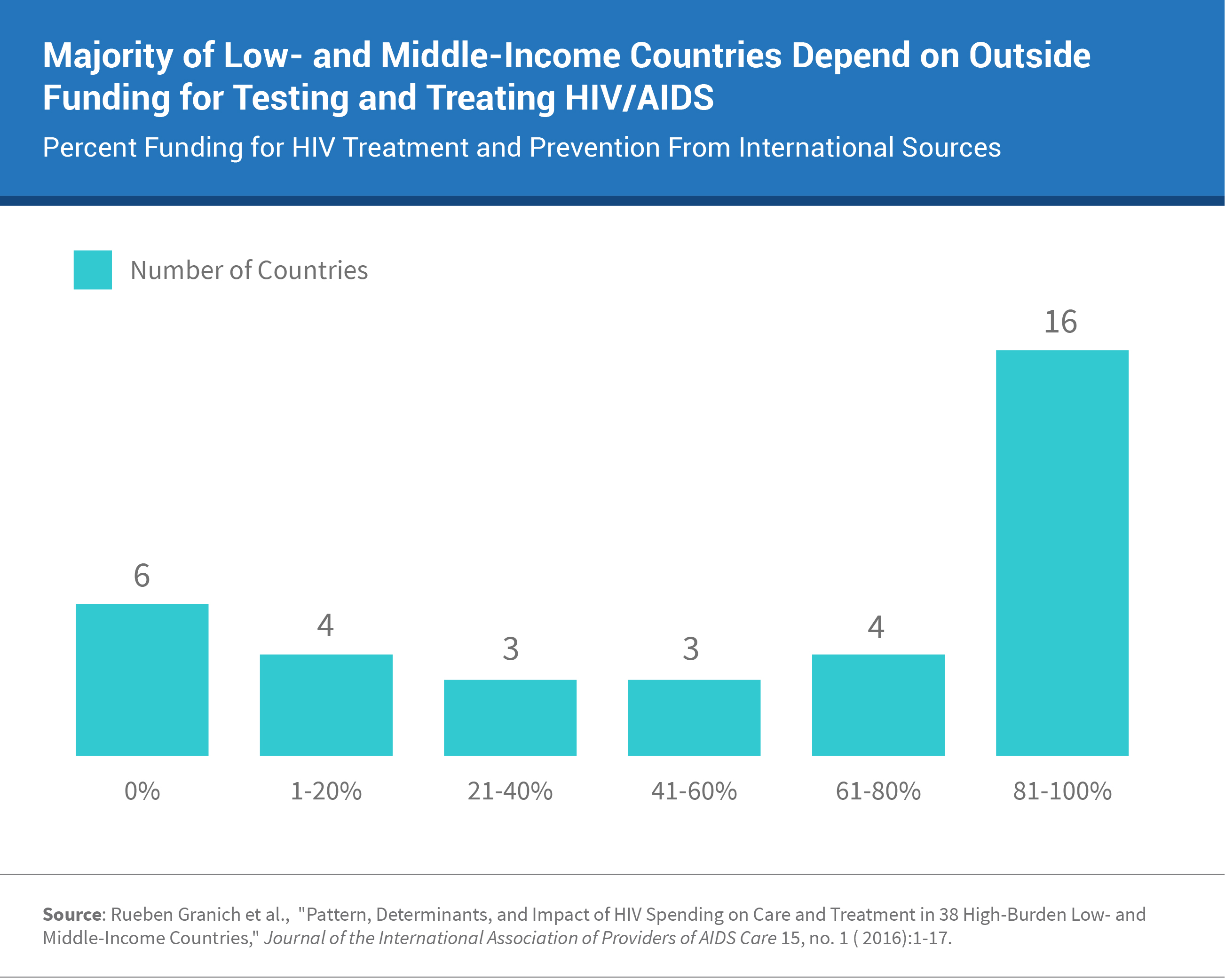 Accessibility is a huge barrier. In LMICs, many services are unavailable, or too far away to access.8 Many adolescents also face problems related to age and will not be seen without a parent or guardian present.9 This restriction causes problems for adolescents who do not wish their parents to know their reason for seeking services (abortion, contraception, HIV testing and treatment, substance abuse, etc.). Many adolescents are not aware of particular services that are offered or cannot afford to utilize them.10

Despite these challenges, many cities have made significant progress in incorporating youth into their programs intended for reaching their 90-90-90 goals. The following section highlights several of these programs.

Chautabú: A web-based program in Buenos Aires, Argentina, Chautabú—without taboo—provides youth with a safe space to seek sexual education and counseling and find information on adolescent-friendly clinics. These clinics allow youth to seek services related to HIV testing and treatment, addiction management, sexual education, and counseling.11 Chautabú believes in a healthcare system without mention of taboo and has had a huge impact on youth, with 433,000 visiting the site since its inception in 2013.12

Zvandiri: A community-based program operated in 36 districts throughout Zimbabwe, Zvandiri—“As I Am”—was developed by six HIV-positive youth in 2004. The program trains youth to be peer mentors—Community Adolescent Treatment Supporters—to youth as well as young children, educating them about HIV transmission, HIV/AIDS, and the location of testing and treatment clinics. An evaluation of the program in 2015 showed that nearly 7,000 children and adolescents had been reached, and adherence rates to medication have doubled since the program’s initiation.13

Hybrid Mobile Testing Strategy: The Hybrid Mobile Testing Strategy combines two types of HIV testing approaches: home-based testing (HBT) and community health campaigns (CHCs). HBT is effective in reaching those who do not attend clinics for services and offers the opportunity for couples counseling, while CHCs are beneficial for reaching a large number of people.14 In Kenya and Uganda, the Hybrid Mobile Testing Strategy reaches 32 communities with HBT and multi-disease CHCs targeted toward youth.7  A recent randomized control trial comparing the hybrid strategy with either HBT or CHC alone showed that of the 85 percent of adolescents in stable residences, 88 percent in the hybrid group utilized testing services vs. 72 percent in the HBT group and 15 percent in the CHC group alone.15

HAPS: HIV and Alcohol Prevention in School (HAPS) is a program that consists of 15 interactive sessions on alcohol and risky sexual behavior and peer pressure, and has been successfully implemented in schools in South Africa. A study examining this intervention showed that it was successful in increasing the age of first sexual intercourse, increasing self-esteem, decreasing peer pressure, and more frequent condom use.16

Voucher Programs: Considered a form of demand-side financing that shifts purchasing power from governments to consumers, voucher programs allow governments and donors to focus on other demand-side barriers to stimulate the demand for health services.17 Uganda provides vouchers for SRH services to approximately 30,000 youth, 92 percent of whom received HIV testing services.18

Clinic-based Interventions: The cities of Windhoek, Namibia and Harare, Zimbabwe have re-vamped their maternal HIV programs, reducing mother-to-child transmission by 95 percent and allowing more children and youth to live healthy lives. Harare also has 43 HIV clinics, with seven containing adolescent units.19 Jakarta, Indonesia and Nairobi, Kenya have programs that train healthcare workers to deliver nondiscriminatory, nonjudgmental care, leading to more adolescent-friendly services.20 Many cities are implementing comprehensive care systems where HIV testing and treatment services are integrated with SRH, tuberculosis, and other communicable disease services.21 This allows youth to seek care without their friends or family knowing which services they are utilizing, and thus decreasing stigma.

Political Interventions: Panama City has passed laws prohibiting discrimination based on HIV status, gender identity, and sexual orientation.22 This legislation benefits youth because it decreases the stigma associated with HIV. Similarly, Buenos Aires has by-laws guaranteeing integrated health services for transvestites, transgender, transsexual, and intersex individuals, so adolescents cannot be refused services or judged by health care providers based on their gender identity or sexual orientation.23

Pharmaceutical Interventions: Cheaper alternatives for previous HAART regimens have been discovered and distributed to clinics all over the world. Currently, four Indian manufacturers have been developing generic ARVs that are being used as a first line treatment in 70 percent of LMICs around the world.24

HAART scale up, while effective in decreasing the level of stigma, is inefficient on its own. It is difficult to negate several decades of cultured stigma, and many resources need to be expended to decrease stigma to levels that ensure PLHIV can receive testing and treatment services without fear of discrimination. Chuatabú has been very effective in reaching out to youth and decreasing stigma in Buenos Aires; other cities would greatly benefit from this platform. Cities also need to programs similar to the ones in Nairobi and Jakarta to train health workers to deliver nondiscriminatory and nonjudgmental care. Having adolescent units in clinics like the ones in Harare would allow youth to receive more comprehensive care that is catered solely toward their needs. Additionally, locating these adolescent units in general services/primary care clinics would allow the specific services that adolescents are seeking to remain anonymous in the event that they are spotted by someone they know. Lastly, eliminating parental consent laws for youth under age 18 would allow youth to seek testing without being obligated to inform their parents. All these efforts will help decrease stigma, eliminate HIV-related discrimination, and make seeking testing and treatment safer for youth in the fast-track cities and beyond.

Funding is a much more difficult barrier to overcome, but the manufacturing of cheaper, generic ARVs has greatly reduced the costs of HIV treatment. Voucher programs like the one in Uganda would allow youth to access HIV testing and treatment services at little to no cost. Increasing funds toward PEPFAR, the Global Fund for AIDS, TB, and Malaria, and other international HIV funding programs would greatly help offset the costs of testing and treatment in LMICs. If these major changes can be made, we have a chance to meet our 90-90-90 goals in both adults and youth by 2020.