Fertility Declining in the Middle East and North Africa

(April 2008) The Middle East and North Africa includes some of the world’s fastest growing countries, and the region as a whole saw its population quadruple in the second part of the 20th century, from 104 million to 400 million. It added another 32 million by 2007 (see Figure 1).

But growth of the mainly Arab countries of the Middle East and North Africa has been slowed by a veritable revolution in marriage and childbearing in recent decades. While a young population structure ensures momentum for future growth, the pace has slackened thanks to fertility declines in some of the region’s largest countries. MENA’s total fertility rate (TFR), or average number of children born per woman, declined from about seven children in 1960 to three children in 2006.1 The decline started first in Lebanon, then in a few other countries, including Egypt, Iran, and Tunisia. These last three countries were among the first to adopt policies to lower fertility as a way to slow population growth.2

In Iran, Lebanon, Tunisia, and Turkey, fertility was at or below the replacement level of about 2.1 children per woman. Yemen’s TFR has edged downward, but remains the region’s highest at 6.2 in 2005. Israel’s TFR was the region’s lowest in the 1950s, but has not declined as far as in many other countries (see Figure 2).

Strong cultural values attached to the family and traditional marriage and childbearing practices delayed the transition to lower fertility in MENA. The family is the center of life in MENA’s culture. Families provide social security for the elderly, sick, or disabled, and an economic refuge for financially dependent relatives.3 Accordingly, universal marriage and large families were highly valued in MENA. Muslim migrants from MENA countries often bring these family norms to their new homes. Muslims in France and Germany have somewhat higher fertility rates than non-Muslim French and Germans.4

Within Israel, Muslim women had 4.0 children on average in 2005, compared with 2.7 for Jewish women, and 2.2 for Christian women.5 These cultural factors helped delay the transition to lower fertility in MENA, even as the region was developing economically.

But several changes in recent decades hastened the decline in fertility: delayed marriage, wider acceptance of and access to family planning services, and increased education of girls and young women. In some countries, the laws that have restricted women’s rights and participation in the wider society are being relaxed. Some observers have noted that these fundamental changes demonstrate that Islam is not itself a barrier to fertility decline or improved status of women as many had assumed, but that the high fertility that persisted in the region for so long reflected a constellation of social and economic as well as religious factors.6

Marriage is an important turning point in a young woman’s life in MENA. Marriage and childbearing define life for nearly all women in the MENA region. Until the last few decades, women throughout the region typically married while still in their teens or early 20s. The universal value placed on marriage, compounded by religious and social condemnation of premarital and extramarital sexual relationships, encouraged girls to marry young and to bear children soon thereafter. Only rarely did women remain single and childless.

But now, women are waiting until they are older to marry and are marrying men closer to their own age. And, couples want fewer children. The age at marriage in the region is rapidly changing. While the average age at first marriage for women was between 18 and 21 in most countries in the 1970s, it was between 22 and 25 by the late 1990s. North African countries saw an especially steep increase in marriage age. In Libya, the average rose from age 19 to age 29 between the mid-1970 and late 1990s. The average marriage was above age 25 in all the North African countries except for Egypt, where it was just 22 in 1998. In high-fertility Yemen, the average age at marriage was about 21 in 1998.7

Another remarkable shift in marriage patterns of some countries is the increase in number of women who are not married by the time they reach their late 30s, many of whom will never marry. Lebanon stands out, with one-fifth of women ages 35 to 39 still unmarried. In contrast, less than 5 percent of women stayed single into their late 30s in most of the Arabian Peninsula countries.8

The delay in marriage also reflects rising economic aspirations for young people, including a trend toward more couples living on their own. The costs of getting married have been increasing in some countries. But the marriage delay also marks a broader shift in women’s role in MENA society. Women who marry while still in their teens typically are more socially isolated, know less about family planning and reproductive health services, and often lack the power to make decisions about their own health, especially if their husbands are much older. Marriage may cut short girls’ formal education and often traps them in a vicious cycle of low education, high fertility, and poverty. Later marriage mean a shrinking share of girls will be caught in this cycle.9

The rising marriage age, along with increases in education and family planning use, has helped lower fertility in the region. The fertility decline of the past few decades is likely to continue, even accelerate, as education, economic opportunities, and access to family planning services expand.

This article was adapted from: Farzaneh Roudi-Fahimi and Mary Mederios Kent, “Challenges and Opportunities—The Population of the Middle East and North Africa,” Population Bulletin 62, no. 2 (2007). (PDF: 792KB) 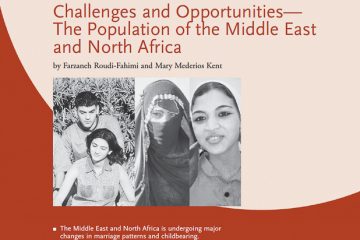 Population Bulletin, vol. 62, no. 2: Challenges and Opportunities—The Population of the Middle East and North Africa