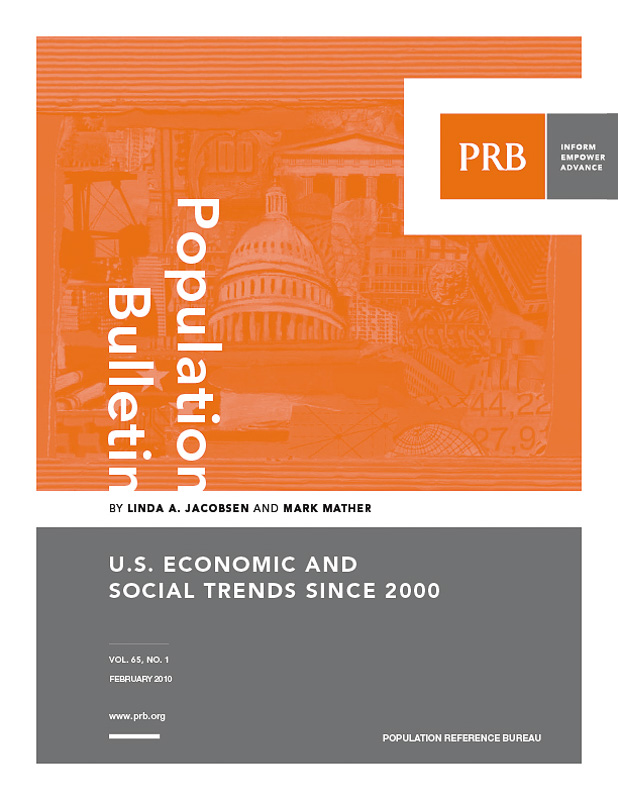 (February 2010) No racial or ethnic group has been immune to the effects of the U.S. recession, but a new Population Bulletin by the Population Reference Bureau shows that Latino men may be feeling those effects more than other demographic groups. PRB’s report, “U.S. Economic and Social Trends Since 2000,” not only examines the impact of the recession on the U.S. population, but also assesses the divergent paths of racial and ethnic groups over the past few years.

Focusing on unemployment, black men have fared the worst. Since the onset of the recession in December 2007, the unemployment rate for black men has increased from 10 percent to 21 percent. During the same period, the rate for Latino men jumped from 6 percent to 15 percent.1 However, unemployment rates do not tell the whole story. The unique position of Latino men in the U.S. economy—combined with their low levels of education and geographic concentration in economically distressed states—has put them in a precarious economic position relative to other demographic groups.

Figure 1
Percent of Persons Ages 18 to 24 Enrolled in College or Graduate School by Race/Ethnicity, 2008

Latino men have been disproportionately affected by the sagging demand for new homes, remodeling, and commercial real estate. Nearly one-fourth of Latino men (23 percent) were working in construction at the beginning of the recession in 2007, a higher share than that of white men (13 percent) and nearly three times the share of black men (8 percent).2 The Bureau of Labor Statistics estimates that about 2 million construction jobs were lost between December 2007 and January 2010.3 One positive note for Latinos has been the shorter amount of time spent unemployed compared with other racial/ethnic groups. The relatively young age structure of the Latino workforce may be a factor in helping them find employment sooner, since unemployed older workers spend more time, on average, looking for work.4

Latino men have lower levels of education compared with other demographic groups, limiting their access to jobs with decent wages. In 2008, 41 percent of Latino men ages 25 and older had not graduated from high school, nearly twice the proportion of black men (21 percent) and four times the share of non-Hispanic white men (10 percent). Young Latino men are also less likely to be enrolled in college compared with young adults in other groups. Less than one-fourth of Latino men ages 18 to 24 were enrolled in college or graduate school in 2008, compared with one-third of Latino women. Among non-Hispanic whites, nearly half of women and 41 percent of men were enrolled in college or graduate school (see Figure 1). These differences are important because earning capacity varies considerably by education level. In 2008, poverty levels ranged from a low of 3 percent among those with graduate or professional degrees to a high of 24 percent among high school dropouts.5

Latinos are geographically disadvantaged because of their high concentrations in states with the steepest declines in home values, including California, Florida, and Nevada. During the housing market boom, Latinos benefitted from an increase in mortgage lending to lower-income households. The homeownership rate among Latino-headed households jumped 6 percentage points between 2000 and 2007 and surpassed the rate for black householders beginning in 2003. Median home value for Latino homeowners rose sharply in the first half of the decade and exceeded that of non-Hispanic whites by 2007.

However, the rise in homeownership that increased Latino household wealth earlier in the decade became a liability for many Latino families when home values declined. The median value of Hispanic-owned homes dropped sharply in 2008, and many Latino families lost their homes to foreclosure. After adjusting for inflation, the median home value for Hispanics fell by 11 percent between 2007 and 2008, compared with a 2 percent drop for non-Hispanic whites, and a 1 percent decrease for African Americans (see Figure 2).

The proportion of Latinas in the labor force remains well below that of Latino men. However, the declining economic prospects for Latino men has created more pressure for Latinas to enter the workforce to supplement male earnings. In fact, the latest data from the Bureau of Labor Statistics shows that the labor force participation rate for Latinas has increased slightly since the onset of the recession, from 56 percent to 57 percent, while the rate for Latino men dropped from 81 percent to 78 percent.6 If these trends continue, Latinas could close the gender gap in labor force participation rates and play a more central role in providing economic security for Latino families.