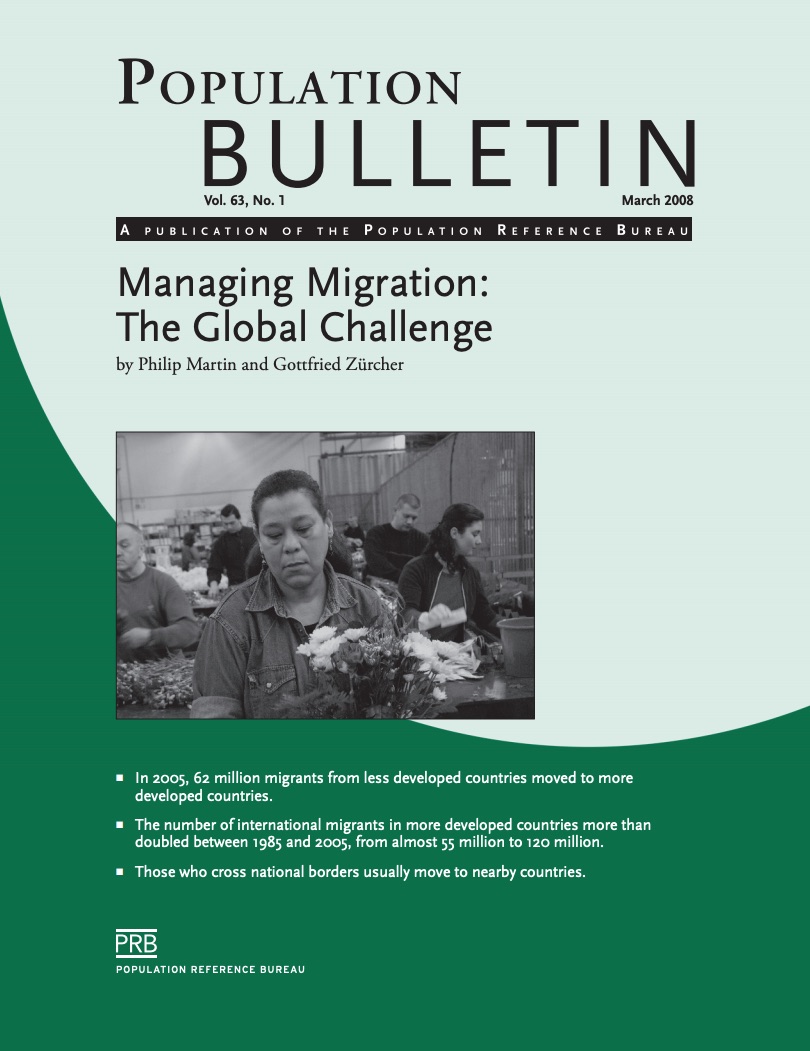 However, most of the world’s 6.6 billion people never cross a national border; most live and die near their place of birth. Those who cross national borders usually move to nearby countries, for example, from Mexico to the United States, or from Turkey to Germany. The largest flow of migrants is from less developed to more developed countries (see figures). In 2005, 62 million migrants from developing countries moved to more developed countries, but almost as many migrants (61 million) moved from one developing country to another, such as from Indonesia to Malaysia. Large flows of people also move from one industrialized country to another, from Canada to the United States, for example, and much smaller flows move from more developed to less developed countries, such as people from Japan who work in or retire to Thailand.

The international community believes that international migration should be voluntary, and has tried to minimize “forced migration,” whether motivated by persecution or economic deprivation at home. The United Nation’s 1948 Universal Declaration of Human Rights asserts that “everyone has the right to leave any country, including his own, and to return to his country.”2 However, the right to emigrate does not give migrants a right to immigrate, and most migrants are not welcomed unconditionally into the countries to which they move.

This Population Bulletin, written by Philip Martin and Gottfried Zürcher, reviews the migration streams of the last several decades, globally and by world region.

Migration is the movement of people from one place to another. As long as humans have wandered in search of food, they have migrated from place to place. But international migration is a relatively recent development. Only in the early 20th century was the system of nation-states, passports, and visas developed to regulate the flow of people across borders.3

International migration is the exception, not the rule. Most people do not want to move away from family and friends. In addition, governments try to regulate border crossings. But international migration is likely to increase in the 21st century because of persistent demographic and economic inequalities and because many advances in communications and transportation facilitate mobility. Borders proliferated over the last century, sometimes placing legal and administrative boundaries between extended families, friends, and trading partners where there were none before. There were 193 generally recognized nation-states in 2000, more than four times the 43 in 1900.4 Each nation-state distinguishes citizens and foreigners; uses border controls to inspect those seeking entry; and determines what foreigners can do while inside the country, whether they are tourists, students, guest workers, or immigrants.

Most countries discourage immigration—they do not welcome the arrival of foreigners who wish to settle and become naturalized citizens. Some also discourage emigration. This was the situation in communist nations as symbolized by the Berlin Wall, which was used to deter crossing from East to West Germany between 1961 and 1989. Today, North Korea continues to prevent its citizens from leaving the country.

Five major countries plan for the arrival of immigrants: the United States, which accepted 1.2 million immigrants in 2006; Canada, which accepted 250,000; Australia 125,000; New Zealand 50,000; and Israel 25,000.5 Industrialized countries had planned to accept 1.5 million immigrants a year. The number of newcomers arriving in these countries each year exceeds the number planned, suggesting that many are temporary visitors or unauthorized foreigners who find ways to settle rather than newcomers who enter explicitly as potential new citizens.

Perspectives on the rising number of migrants can be framed by two extremes. At one extreme, organizations ranging from the Catholic Church to the World Bank have called for more migration, arguing that people should not be confined to their countries of birth by national borders and that more migration would speed economic growth and development in both sending and receiving countries.

At the other extreme, in virtually every industrialized country, organizations are demanding sharp reductions in immigration. In the United States, the Federation for American Immigration Reform (FAIR) argues that unskilled newcomers hurt low-skilled U.S. workers, have negative environmental effects, and threaten established U.S. cultural values. Political parties in many European countries have called for reducing immigration at one time or another. For example, during the 1995 French presidential campaign, the National Front in France proposed removing up to 3 million non-Europeans from France in order to reduce the number of Muslim residents.6

The first step toward making migration manageable is to understand why people migrate. Most people do not want to cross national borders, and even though the number of migrants is at an all-time high, international migration is still low relative to the 97 percent of the world’s residents who did not migrate. Furthermore, economic growth can turn emigration nations into destinations for migrants, as it did for Ireland, Italy, and Korea. The challenge is to manage migration by reducing the differences that encourage people to cross borders, while taking into account how investment, remittances, and aid can stimulate economic development and reduce migration pressures in the countries that migrants leave.

Philip Martin is professor of agricultural economics at the University of California-Davis, chair of the University of California’s Comparative Immigration and Integration Program, and editor of Migration News, a monthly summary of migration developments. Gottfried Zürcher is director general of the International Center for Migration Policy Development in Vienna, which is supported by 30 European governments to improve migration management.